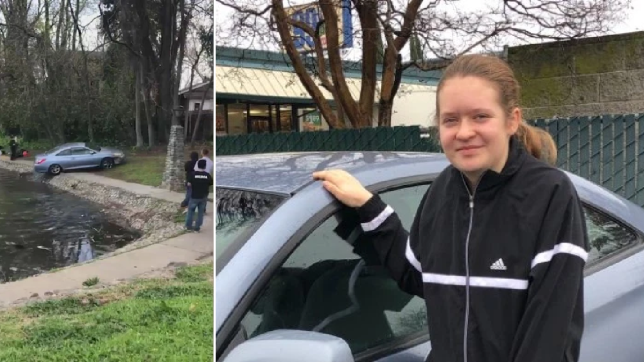 Mary Robertson, 19, donated blood, passed out while driving home and woke up with her car sinking in a lake (Pictures: FOX8/GoFundMe)

A teenager who donated blood passed out while driving home and plunged her car into a lake. Mary Robertson, 19, woke up to the yelling of a nearby fisherman just in time to save her life.

Robertson donated blood last Friday and said she felt weak and almost fainted afterward. The nurses at the blood bank in California told her to sit down and rest for a while and she said she began to feel better.

‘They both were busy, and I didn’t want to bother anyone,’ Robertson said, according to FOX8. ‘And I thought I was fine after sitting there for around 45 minutes, so I just left.’

Robertson said she began driving home and initially was not aware that she had fainted, until she snapped back to consciousness and found herself sinking in Ellis Lake.

A fisherman began yelling at the teenager, ‘Open your windows, swim out of your car!’ her mother Lacie Robertson told the TV station.

‘She opened her window and that was probably just before the electronic system stopped working,’ the mother said, adding that the fisherman’s instructions were likely why her daughter survived.

Mary Robertson expressed gratitude for being alive and not hitting anyone or anything besides the lake while she lost consciousness.

‘I’m just really glad that my window unrolled because if it didn’t, I’d probably be dead right now,’ the teen said.

Despite her near-death experience, Mary Robertson encouraged others to donate blood. However, for those who feel weak afterward, she cautioned against getting up and driving right away.

‘Even if you think you feel well, just wait an extra 30 minutes,’ she said.

Mary Robertson’s car was pulled out of Ellis Lake a few days after the incident by Sutter County sheriff’s divers.

Lacie Robertson set up a GoFundMe account to help her daughter pay for car-related expenses.