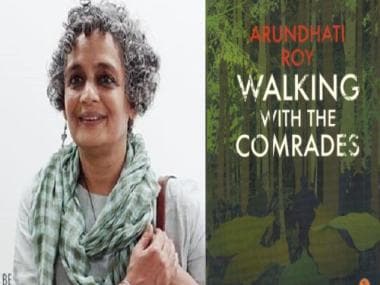 The book, Walking with the Comrades, was removed from the varsity’s syllabus as it featured the author’s visit to Maoist hideouts, which the ABVP said was an ‘anti-national subject’

Acting on a complaint from the ABVP, the Manonmaniam Sundaranar University in Tirunelveli, Tamil Nadu, has withdrawn Arundhati Roy’s book Walking with the Comrades from its syllabus, according to several media reports.

As per the university authorities, the book was removed as it featured the author’s visit to Maoist hideouts and was “inappropriate to teach”.

As per a report in Indian Express. said that the book was a part of varsity’s syllabus since 2017 for BA English language and literature students in the third semester. It featured under the Commonwealth Literature category.

University vice-chancellor K Pitchumani told the newspaper the decision to withdraw the book was made by a committee comprising academic deans and board of studies members based on the ABVP complaint.

The committee, he added, “decided to withdraw the book as it may be inappropriate to teach a controversial book for students”. “It was only a week ago that it was brought to our notice that Roy had glorified Maoists,” Pitchumani told The Hindu.

Roy’s book has been replaced with M Krishnan’s My Native Land: Essays on Nature, he informed.

Hindustan Times  quoted a member of the ABVP’s Tirunelveli unit as saying that they opposed the teaching of the book as it was based on an “anti-national subject”.

“The book highlights Naxalism and is anti-Indian and anti-humane,” Gopi Gangadaran from the ABVP told the newspaper.

Meanwhile, Opposition parties in Tamil Nadu, including the DMK have condemned the decision to withdraw the book from the MS University syllabus.

“It is an attempt to saffronise education and a mindset against alternative views,” DMK deputy general secretary and former minister A Raja said, according to another report in The Hindu.

He also said that the move denies students “the opportunity to learn literature and history from different backgrounds”.

Raja also wondered if Pitchumani was following the footsteps of Anna University VC Surappa who had recently “imposed the Bhagavad Gita in place of Tirukkural in the syllabus”.

The ABVP is the student’s wing of the BJP and its members.

In January, the group was accused of attacking students from rival Leftist groups with sticks and rods in the Jawaharlal Nehru University. The ABVP, in turn, accused the Leftist student groups of doing the same.