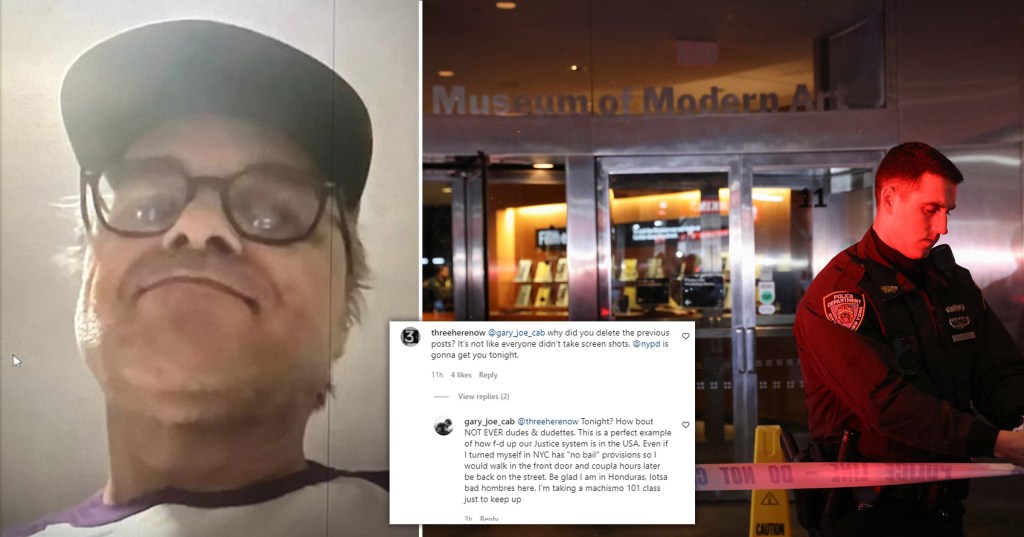 The man accused of stabbing to MoMA employees has taken to taunting authorities on social media (Pictures: REUTERS / NYPD / Instagram)

The man suspected of stabbing two Museum of Modern Art (MoMA) employees on Saturday has taken to social media to taunt authorities, who are still holding a manhunt in search for the man.

Gary Cabana, 60, stabbed two 24-year-old museum employees on Saturday after being denied entry after his membership was revoked. The attack was captured by surveillance video from the Manhattan museum, which police released on Sunday along with photos of Cabana, the New York Times reported.

According to police, the 60-year-old suspect’s membership had been revoked due to two prior incidents of disruptive behavior. Cabana received a letter on Friday rescinding his membership, but still showed up to the museum on Saturday saying he wanted to watch a film.

Despite fleeing the scene, a user writing as Cabana has remained active on social media, making a series of posts to Facebook and Instagram.

One post on Facebook said he had bipolar disorder and was ‘triggered’ by someone telling him to be quiet during a movie.

‘Bipolar is a tough road to hoe,’ Cabana allegedly wrote. ‘Dr Jekyll to Mr Hyde. THEN U get framed ind [sic] evicted from MoMA (not just the movies, ALL THE ART too) by a bitter old woman who shushes U when U LAUGH during a comedy.’

The last known address for Cabana was at a supportive housing unit in Manhattan run by the nonprofit Breaking Ground, which provides housing for low-income people, people with mental illnesses and those who have been diagnosed with HIV/Aids, according to the Times.

In a response to one person in the comments section of his Instagram page, he said: ‘Every person picked up in NYC has at least 30 priors. It’s a fricking revolving door of justice.’

In another comment he joked: ‘Now gramps can take his nap and by morning the cops will . . . still be filling out paperwork?’

He took another aim at police in a post where he claimed to be hiding out in Honduras, writing: ‘This is a perfect example of how f****d up our justice system is in the USA. Even if I turned myself in NYC has “no bail” provisions so I would walk in the front door and a couple of hours later be back on the street. Be glad I am in Honduras. Lotsa bad hombres here. I’m taking machismo 101 class just to keep up.’

Police say they are aware of the social media posts and are investigating.

MoMA was closed on Sunday, and is always closed to non-members on Mondays. It will re-open to the public on Tuesday.