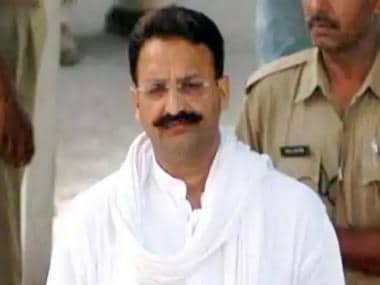 While Uttar Pradesh alleged in the apex court that there is collusion between Ansari and Punjab Police, the Amarinder Singh government refuted these claims and raised questions over the maintainability of plea filed by the Yogi Adityanath-led government

The Supreme Court on Thursday reserved its order in the case pertaining to the transfer of jailed politician Mukhtar Ansari from Punjab to Uttar Pradesh, according to several media reports.

The Punjab government, arguing against the transfer in front of a bench of justices Ashok Bhushan and RS Reddy, said that Ansari can appear for cases underway in Uttar Pradesh via video-conferencing.

But the BJP-ruled state, opposing that contention, stated “if video conferencing is sufficient mode in all cases then I don’t think Vijay Mallya is needed in India. He can appear here from the UK.”

The case has been in the limelight because of the jurisdiction battle between BJP-ruled Uttar Pradesh and Congress-ruled Punjab, with both states accusing the other of not being interested in upholding justice.

Ansari is lodged in district jail Rupnagar in Punjab since January 2019 in an extortion case after his alleged call from his UP jail cell to a company CEO in Mohali. He is also accused of at least 38 heinous crimes in Uttar Pradesh, but he has been acquitted in most of them due to lack of evidence and witnesses turning hostile.

While Uttar Pradesh alleged in the apex court that there is collusion between Ansari and Punjab Police, the Amarinder Singh government refuted these claims and raised questions over the maintainability of plea filed by the Yogi Adityanath-led government.

Solicitor General Tushar Mehta, appearing for Uttar Pradesh, told the bench that several cases are pending against Ansari in the state and in 2019, an FIR for alleged extortion was lodged in Punjab against him.

He said that no chargesheet has been filed yet by the Punjab Police in the case and investigation is still going on.

He (Ansari) is dodging the judicial system, Mehta told the bench, adding that he managed medical certificates which said that he is not permitted to travel but at the same time, Ansari had attended proceedings in other courts.

He has mocked and taken for ride the entire judicial system and the administrative system, he added.

The senior law officer said it appears like a film script as several cases were pending against him in Uttar Pradesh and suddenly, the Punjab Police lodged an FIR in 2019.

Mehta said Ansari, who is lodged in Punjab jail, has not been produced before the court in Uttar Pradesh despite several orders.

I am showing the collusion between them, the solicitor general said, adding, He is operating and running his illegal activities from jail in Punjab.

During the course of the argument, the Punjab government told the Supreme Court that Yogi Adityanath-led government has “no fundamental right” to seek his transfer.

The Uttar Pradesh government had earlier told the apex court that the Punjab government is “shamelessly” protecting Ansari with doctors allowing him hospitalisation for moderate issues like back ache, skin infections or sore throat.

Senior advocate Dushyant Dave, appearing for Punjab government, questioned the maintainability of the plea filed by Uttar Pradesh and said this issue would have far-reaching consequences.

“We have nothing to do with Mukhtar Ansari. If he is a criminal, he is a criminal. The question is whether one state can file a writ petition in this court against another state in the circumstances in which Uttar Pradesh has done in this case,” Dave told the court.

Giving an example of the case of journalist Siddique Kappan, who was arrested on his way to Hathras where a young Dalit woman had died after being gang-raped, Dave said, “Can Kerala tomorrow move the Supreme Court and say that he (Kappan) is from Kerala so he be transferred to Kerala from Uttar Pradesh?”

He alleged there is a threat to Ansari’s life in Uttar Pradesh as one of the co-accused was “eliminated in encounter” by the Uttar Pradesh Police.

“Government of Uttar Pradesh says I (Ansari) am lodged in Punjab jail while cases are pending in Uttar Pradesh so there is problem in the cases there. This problem will be resolve if my cases are transferred to Delhi,” Rohatgi said.

Rohatgi argued Ansari is being targeted because of his political affiliation to a party in Opposition.

“My co-accused was encountered. Uttar Pradesh has an axe to grind against Punjab and court should not allow the shoulders of the Supreme Court to be used to fire a gun. This should not be allowed,” Rohatgi said.

He said that Ansari has been appearing in all courts through video-conferencing and bogus arguments have been used that trials are being stalled.

“I am seeking transfer of cases outside Uttar Pradesh. They may be transferred to Delhi because of the fear of political vendetta in the state,” he said. He added: “How can the state be seeking my transfer [sic] and in any case it should be the judiciary that should be seeking my custody.”