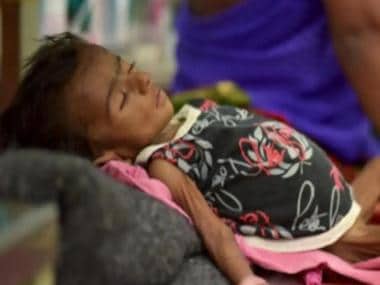 In the latest development in the Koili Devi vs Union of India case, the Supreme Court has sought the Centre’s response to the plea that ‘three crore ration cards are gone’

Santoshi Kumari was an 11-year-old girl from Karimati village of the Jaldega block in Simdega district of Jharkhand. On September 28, 2017, Santoshi fell unconscious. “Bhaat (rice),” she pleaded, recalls her mother. The mother rushed to the nearest Public Distribution System (PDS) Centre begging for rations, citing her daughter’s poor health, but the dealer denied her, reiterating that her registration stood cancelled. Santoshi died the very same day.

Her mother Koili Devi and sister Gudiya Devi claimed that she had not eaten anything for eight days straight and that her death was caused by starvation. A fact-finding team commissioned by the district collector of Simdega mentions in the report that Santoshi died of malaria. This, therefore, is the official stance of the Central and state governments in this matter.

Around 11 months prior to this incident that highlighted the failure of the PDS, the Centre announced that all ration cards must be linked to Aadhaar cards for the sake of ‘universalisation’. In March 2017, 10 of the 700 families that received rations from the same dealer as Koili Devi, were ousted from the PDS scheme and their ration cards stood cancelled/seeded. These 10 families had not been receiving any food aid for the past six months. Santoshi also could not avail of mid-day meals as her school was on holiday for Durga Puja. Santoshi’s mother and sister were the only earning members of a family, and had been involved in grass-cutting jobs, barely making Rs 80 to 90 per week.

The block development officer of Jaldega block confirmed that the family’s registration was cancelled in March. On 1 September, local activists from the area sent an official complaint to the district supply officer along with a copy of Koili Devi’s Aadhaar card, asking for a renewed ration card, which only arrived two weeks after Santoshi’s death.

Many activists and social workers supported Koili Devi and her elder daughter. The Human Rights Law Network helped them file a petition against the Union of India in the Supreme Court. She is represented by senior advocate Colin Gonsalves. The petition was filed in February 2018 and was taken into notice by the Chief Justice of India in March 2018.

The petition is pleading from the point of view of Santoshi’s death but also refers to many such deaths, which have taken place due to starvation in various parts of the country. The petition seeks an independent query into the matter and the creation of a robust grievance redressal mechanism. The recent addition in demand through amendment in the petition also includes cancellation of compulsory Aadhaar linkage with the ration card.

Till now, eight hearings have taken place in the matter by the Supreme Court of India. Since the beginning of the court proceedings, the Supreme Court has involved some major institutions and personnel from the Central government in the matter. In March 2018, it asked the Central agency for the help of the attorney general in the matter. One of the petitioners in the case, ‘People’s Union for Civil Liberties’ was impeded by the apex court in the hearing dated 2 August, 2019.

The most recent and imperative hearing took place on 17 March. The media applauded the Supreme Court for recognising the fact that “three crore ration cards have gone” — a figure that couldn’t be located during the past seven hearings. A three-judge bench of CJI SA Bobde, Justices AS Bopanna and V Ramasubramanian heard the matter of Koili Devi versus Union of India.

Initially, the petitioners were asked by the Supreme Court to approach respective high courts in the state where ration cards have been cancelled, PTI reported. All the while, the Central government, represented by Additional Solicitor-General Aman Lekhi, too was dismissive of the issue as he claimed that the implementation of a ‘grievance redressal mechanism is the principal issue in the matter’. The case only garnered the Supreme Court’s seriousness when Gonsalves said that the cancellations were done at a central level for not being linked to Aadhaar. “More than three crore cards were cancelled at the central level,” he told the court, “In every state, 10 to 15 lakh cards are cancelled. There are situations where fingerprints or iris scanner does not work in tribal areas.”

Gonsalves said that he had derived this data about ration cards from the declaration of the Union of India. The data on around three crore ration cards appears to be accurate, giving rise to speculation about the difference between number of ration cards before February 2017 and the present number.

Lekhi insisted that the high courts must take the case. Apart from that he argued that there is a grievance redressal mechanism under the Food Security Act, which wasn’t approached by the petitioners. Gonsalves replied, “If the cards are cancelled on a central level, we tend to hear the matter here in the Supreme Court itself.” Lekhi further contested that the government has provided for alternate provisions in the case of absence of Aadhaar cards to issue the ration cards. If the cards have still not been issued then the matter is related to the state and not Central government, he added. The Supreme Court bench, though, concluded that the apex court would hear the matter, deeming it ‘too serious’. It has sought a response from the Centre on the plea by Gonsalves.

Of the demand regarding the setup of new and robust grievance redressal mechanisms in place of the one that already exists under Food Security Act (which is deemed quite inefficient by petitioners), the Central government does not appear serious. One could wonder at the complacency in such a matter relating to the cause of hunger eradication.

The National Food Security Act was passed by both Houses of Parliament on 5 July, 2013. The UPA government in 2011 introduced the highly controversial bill. It was largely protested by the BJP because of which the UPA government had to introduce it as a Presidential Ordinance to get it passed. The Act is highly ambitious and acts as an umbrella group for a lot of food, child and nutrition related activities. The mid-day meal programme, Integrated Child Development and the PDS are the primary organisations related to the Act. The Act aims to bring 75 percent of the rural and 50 percent of the urban population under the PDS.

According to data published by The Hindu, as many as 23.58 crore ration cards are issued by the Central government under PDS. Of this, 89 percent are Aadhaar seeded (linked), only 33 percent (7.76 crore) are linked with mobile numbers and only 17 percent (4.05 crore) are linked to bank accounts. This data highlights the complexity of the situation and how grave this problem can become if a person with limited privilege gets caught out of the loop.

The Aadhaar-PDS link as a joint machinery has continually failed in its attempt to safeguard the right of a person to food. Two major reasons for food denial include ration cards not being linked with Aadhaar, and second, the failure of Aadhaar-based biometric authentication. As these are mostly physical workers, the fingerprints sometimes do not match the biometric information stored on the Aadhaar database, and the authentication stands unsuccessful.

“The government’s own website shows that the proportion of people who are unable to buy their food rations at the moment is at least 10 percent, probably more. On this, the official data is consistent with the field survey. That may not seem like a very large number, but in absolute terms, it translates into something like 2.5 million people in Jharkhand being deprived of their food rations,” said economist Jean Dreze in an interview with Catch News.

In September 2017, the month in which Santoshi died, the then Jharkhand government led by Raghubar Das announced that the entire population of Jharkhand is covered under the UIDAI and possesses Aadhaar cards. But only 1.7 crore of the 2.3 crore population of Jharkhand covered under the PDS, has linked ration cards with Aadhaar cards, said Dheeraj Kumar, a food rights activist, while talking to The Wire in October 2017.

The Wire maintains an archive of starvation deaths that have taken place in Jharkhand since the February 2017 announcements. The reported incidents include the death of five-year-old Nimami Kumari from Hesatu village in Latehar district and the death of a 65-year-old Ram Charan Munda from the Mahuadaur block of Latehar district. The important point here to note is that the districts such as Latehar or Simdega are tribal-dominated districts. Almost 70 percent of the population of Simdega belongs to the Scheduled Tribes, therefore the Right to Food on the Food Securities Act ought to play a pivotal role in these areas as the lifestyle being practiced here are protected by the Constitution.

If the government wants to implement something for their good, it has to bring them into confidence by helping them unconditionally. If not, such catastrophic deaths will continue to occur in such areas.

That the toll owing to starvation has only steadily risen in Jharkhand since Aadhaar was made mandatory for food rations, indicates that the move has been most unfavourable to the most vulnerable sections of society. The new data of three crore ration cards being written off should provide a window for the Supreme Court and the Union of India to reconsider and provide for sturdy measures.

In October 2015, a constitutional bench of the Supreme Court, led by the then-chief justice HL Dattu, directed the government that a citizen cannot be compelled to have Aadhaar card as a precondition to access Centrally-sponsored welfare schemes. Following this, the Supreme Court observed at a hearing in March 2017 that Aadhaar can not be mandatory for welfare schemes such as MGNREGA And EPS. The apex court said that it can be made compulsory in the matters of tax-filing etc, but not in the case of important Centrally-sponsored schemes. It is strange that hunger eradication and food security are not considered ‘Centrally-sponsored scheme’.

While conversation regarding the procedural aspect of the PDS-Aadhaar link is once again gaining momentum, one primary demand of the petition that remains unaddressed is the inquiry into the death of Santoshi.

It is the original petition of Koili Devi that has been used for and given a larger spectrum by the advocates of the pleading party and NGOs by bringing in demands of cancellation of ration cards highlighting other starvation deaths, but the Central government must remember that the petitioner is someone who has lost her child due to food shortage and must shed the sort of insensitive behaviour in which where her case is being neglected entirely.

The official record still holds that Santoshi died of malaria. Her family awaits justice and the benefits that the state could provide the family if proven otherwise.