Until last week Lucien Justin, the chair of the Jude Watta fisheries committee in Wattala, near Sri Lanka’s capital, Colombo, lived a simple life. He and his wife ate two meals a day, and their small community of 90 fishers regularly supported each other with food and money. “If we fish, money comes. If not, we are left hungry,” he said.

After the worst maritime disaster in Sri Lanka’s history poisoned the waters near where he fishes, however, he fears even that simple life is now in dire danger. “People are scared. Even if we caught fish, they wouldn’t eat it because they think it’s poisonous,” he said.

The fire may be out aboard the cargo ship MV X-Press Pearl, which has now partially sunk, but observers fear the worst impacts of the chemical ship disaster are yet to come.

The Singapore-flagged container vessel – travelling from Qatar to India, through Colombo on its way to Singapore – was carrying 350 tonnes of bunker fuel, which authorities say could spill out, hitting coastal communities. Fishing has been banned along the country’s western coastline for about 50 miles. Cutting off access to the sea means cutting off the livelihoods of coastal communities like Justin’s.

The partially sunken MV X-Press Pearl just outside Colombo’s harbour on Friday after it had been burning for almost two weeks. Photograph: Lakruwan Wanniarachchi/AFP/Getty Images

Plastic pellets have also poured out from the ship’s containers, washing up on the beaches. The navy has been called out to clean the burnt wreckage and debris.

But other effects cannot be easily cleaned – or even seen. The ship was carrying a whole array of hazardous chemicals: nitric acid, used for explosives; epoxy resins, used for paints and primers; and ethanol and lead ingots, used for manufacturing vehicle batteries.

There were other products, too: caustic soda, lubricating oils, aluminium byproducts, polyethene used for grocery bags and packaging, cosmetics and even food items, according to Hemantha Withanage, an environmental scientist and executive director of the Centre for Environmental Justice in Sri Lanka.

One container, Withanage noted, is named Environmentally Harmful Substances. “What are these substances? We don’t know. Authorities haven’t told us yet,” he said. “But why are they keeping this information a secret?”

The sinking of the ship means the probable leaching of these chemicals into the ocean. “And that’s a serious risk to our ecosystem,” he said, explaining that it could lead to death and contamination of the corals, fish, turtles and other marine life that abound off the country’s coasts. 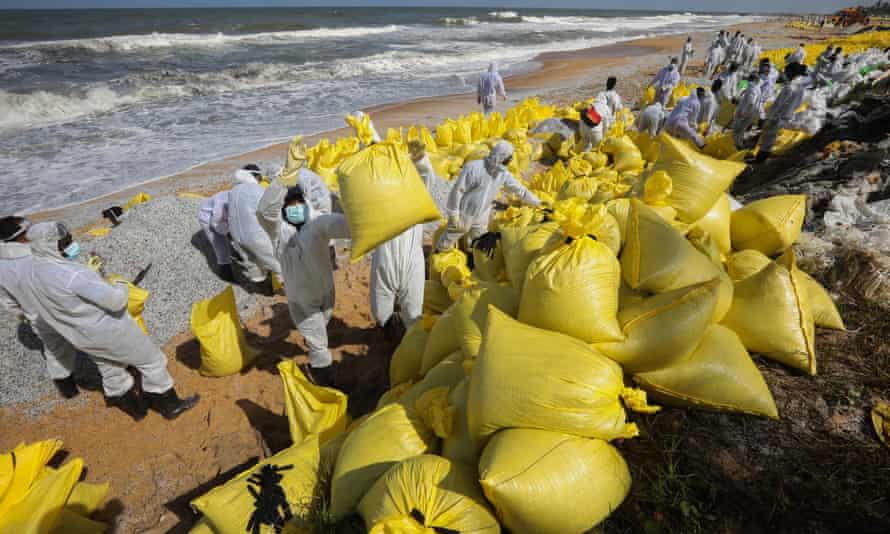 Whales and dolphins frequent the oceans, and the coastal belt also provides a nesting ground for sea turtles: out of the seven types of sea turtles in the world, the Sri Lankan coast welcomes five of them. As the ship caught fire, images circulated on social media of fish, moray eels, rays and turtles washed up on the beaches.

After a fire erupted in the ship because of an acid leak that began on 11 May 11, both Qatar and India denied permission for the boat to unload its chemical containers, according to reports. “We saved the lives of 25 sailors,” Withanage said. “That’s one of the biggest humanitarian actions we took, something we should be proud of, but it comes with an unmeasurable cost to our whole environment.”

Across Sri Lanka, people are angry that the leaking ship was kept in the country’s waters. On social media many residents are lambasting what they see as the government’s negligence, leading to an environmental disaster.

Withanage says the country’s lack of adequate equipment and an early response system meant that the fire spiralled out of control, leading to an explosion on the morning of 25 May, six days after the fire started. Indian emergency support came on 27 May. “The Sri Lankan unit used water for fire control, which is wrong because when harmful agents like sodium methoxide react with water, it forms corrosive substances and ignites a fire,” he said.

Diran Kamantha, 27, who works at the Pegasus Reef hotel on the beach in Wattala, is concerned about potential devastation to the business.

“There are many pellets on the beach. Some areas are black in colour, with the debris from the ship,” Kamantha said. The hotel welcomes foreign and local tourists and hosts wedding parties. “It’s sad because this is not only a bad image to our beaches and our hotel but to our whole country as well,” he said. 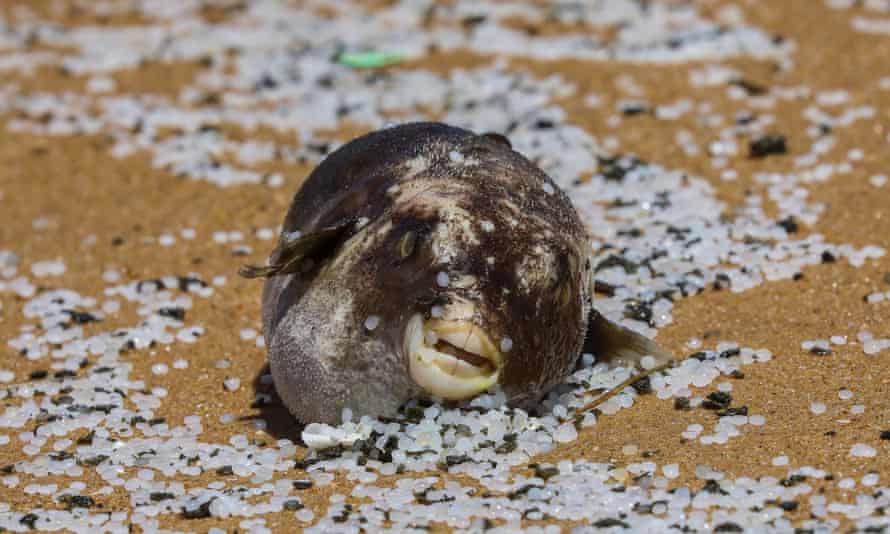 Withanage agrees that the disaster has not just poisoned waters but could deal a permanent blow to Sri Lanka’s reputation – and its own people’s trust in eating the fish caught off their shores.

“For people to eat fish again, there needs to be a mindset change,” Withanage said, citing images of fish washed ashore with plastic trapped in their gills. That plastic “will continue to be in our oceans for decades and decades to come, polluting our coastline, ingested by marine life and entering into our lagoon systems”, he said.

As the country continues to battle a new wave of Covid-19, with an average of 3,000 cases and 30 deaths per day, the government imposed island-wide travel restrictions to keep people at home. The impact that might have on the beach cleaning is unclear. “I don’t think we have enough manpower now,” Kamantha said. “Everyone’s at home and scared to go out because we are fighting a deadly virus.”

As for Justin, the blow feels permanent. “This sea, that is our whole world,” he said. “Without fishing, we don’t know how we can continue to live.”