Four astronauts — three from NASA, one from JAXA, the Japanese space agency — will be sitting inside a SpaceX Crew Dragon capsule, boosted to orbit on top of a Falcon 9 rocket. The mission is known as Crew-1, and the astronauts named their capsule Resilience. They are headed to the International Space Station for a six-month stay.

This is the first of what NASA calls “operational” flights of the Crew Dragon. In May, there was a demonstration mission, with two NASA astronauts — Robert Behnken and Douglas Hurley — aboard. That launch, in a capsule named Endeavour, was the first time that a crewed mission had lifted off from the United States to orbit since the retirement of NASA’s space shuttles in 2011. Its return was also the first water landing by astronauts aboard an American spacecraft since the Apollo capsules stopped flying in the 1970s.

NASA has been relying on Russian Soyuz rockets to get its astronauts to the space station. That has become increasingly expensive, rising to a cost of more than $90 million a seat.

The Crew-1 mission is scheduled to launch on Sunday at 7:27 p.m. Eastern time from the Kennedy Space Center in Florida. NASA Television will broadcast coverage beginning at 3:15 p.m. Or you can watch it in the video player below.

In its latest weather forecast issued on Sunday morning, the U.S. Space Force’s 45th Weather Squadron gives a 50 percent chance of favorable conditions at the launchpad. The administrator of NASA, Jim Bridenstine, said on Twitter Sunday afternoon that the agency was monitoring conditions but still planning for a launch attempt.

SpaceX and NASA are also keeping watch farther out in the Atlantic Ocean. The weather and waters there need to be fairly calm in case something goes wrong during the ascent to orbit and the Crew Dragon needs to make an emergency splashdown (adverse weather conditions led to a postponement of the earlier Saturday launch date).

As is customary for Falcon 9 rocket launches, the first stage or booster is to return to Earth and land on a floating platform, and that too requires that the ocean waters to not be too rough. The Crew-1 booster is to refurbished and reused for the next launch of astronauts, scheduled for next spring.

If Sunday’s launch is delayed, there is a backup opportunity on Wednesday. 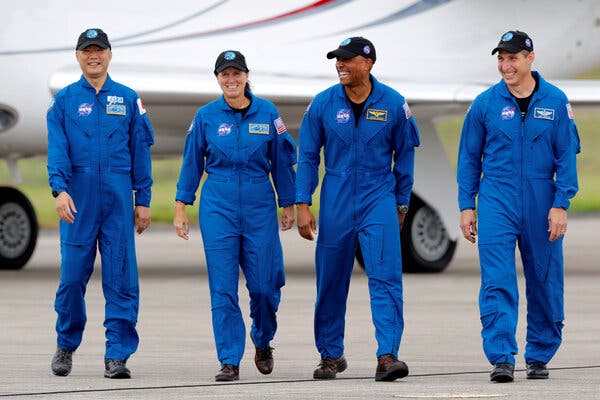 There are four astronauts on Crew-1:

Michael S. Hopkins, 51, a colonel in the United States Space Force, is the commander for the flight. (Coonel. Hopkins is also the first member of the newly created U.S. Space Force to go to space.) He was one of nine astronauts selected by NASA in 2009. He has made one previous trip to the International Space Station, in 2013 and 2014, spending 166 days in orbit.

Shannon Walker, 55, has had one previous stint on the space station, in 2010. Dr. Walker has a doctoral degree in space physics from Rice University, where she studied how the solar wind interacted with the atmosphere of Venus.

Soichi Noguchi, 55, an astronaut with JAXA, the Japanese space agency, will be making his third trip to space. He was a member of the crew of the space shuttle Discovery in 2005 on the first shuttle launch after the loss of Columbia and its seven astronauts more than two years earlier.

During that visit to the International Space Station, Mr. Noguchi made three spacewalks. That included one to test techniques developed to repair damage to the heat tiles on the shuttle similar to what had doomed Columbia when it re-entered Earth’s atmosphere. In 2009 and 2010, he spent five months in orbit as a member of the space station crew.

Victor Glover, 44, selected by NASA in 2013 to be an astronaut, will be making his first spaceflight. He will be the first Black NASA astronaut to be a member of a space station crew. 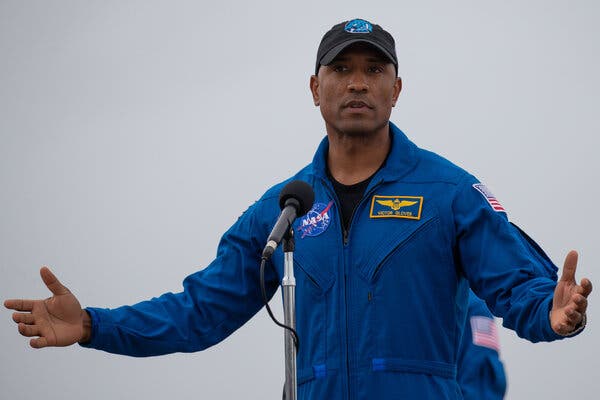 In the 20-some years that people have been living aboard the International Space Station, its extended crew has never included a Black astronaut. Victor J. Glover, a Navy commander and test pilot who joined the astronaut corps in 2013, will be the first.

Since the International Space Station’s inception it has seen numerous other milestones: hosting the world’s first space tourist, having its first female commander and enduring the transition from U.S. astronauts being transported through NASA’s space shuttle program to using SpaceX’s spacecraft.

But Mr. Glover’s achievement is notable for NASA, which has worked to spotlight the “hidden figures” in its history, but has so far sent only 14 Black Americans to space out of a total of more than 300 NASA astronauts.

He will not be the first Black astronaut aboard the station. But those who preceded him from NASA were members of space shuttle crews during the station’s construction and only made brief stays on the outpost.

Mr. Glover and three other astronauts will launch on Sunday aboard a SpaceX Crew Dragon capsule named Resilience and are expected to spend about six months aboard the station.

Next year, he could be followed by Jeanette Epps, who would be the first Black woman to to be part of an I.S.S. crew. She will fly aboard the first operational crewed trip of Boeing’s Starliner capsule. (In 2018, she was pulled from a flight to the station and replaced with Serena Auñón-Chancellor.)

Sunday’s launch follows a summer of racial and social unrest in the aftermath of the death of George Floyd, a Black man, at the hands of the Minneapolis police. When asked during a news conference on Monday about his thoughts on making history, Mr. Glover modestly nodded to the significance.

“It is something to be celebrated once we accomplish it, and I am honored to be in this position and to be a part of this great and experienced crew,” he said. “And I look forward to getting up there and doing my best to make sure, you know, we are worthy of all the work that’s been put into setting us up for this mission. You know, unlike the election — that is in the past or receding in the past — this mission is still ahead of me. So, let’s get there, and I’ll talk to you after I get on board.”

During the summer, Mr. Glover responded to a question on social media about astronauts’ sticking strictly to space.

“Actually no,” he said on Twitter. “Remember who is doing space. People are. As we address extreme weather and pandemic disease, we will understand and overcome racism and bigotry so we can safely and together do space. Thanks for asking.”

He also said this week in an interview with The Christian Chronicle, a publication of the Churches of Christ, that the milestone was “bittersweet.”

“I’ve had some amazing colleagues before me that really could have done it, and there are some amazing folks that will go behind me,” Mr. Glover said. “I wish it would have already been done, but I try not to draw too much attention to it.”

Charles F. Bolden Jr., who served as NASA administrator under President Barack Obama, said that while Mr. Glover was making history, he should not feel burdened.

“Several of us have had an opportunity to try to talk with him regularly and try to help put him at ease and help him understand he’s not carrying the weight of the world on his shoulders,” said Mr. Bolden, who is also Black and spent almost 700 hours in space as a NASA astronaut. “He shouldn’t feel unusual responsibility because he’s Black. He should just go and be another crew member and have a good time.”

Mr. Glover is married to Dionna Odom, and they have four children.

Originally from Pomona, Calif., Mr. Glover graduated with a bachelor’s degree in general engineering from California Polytechnic State University in 1999. Over the course of 2007 to 2010, he earned three master’s degrees: in flight test engineering, systems engineering and military operational art and science.

Mr. Glover is often referred to by his counterparts as Ike, a nod to the a call sign a former commanding officer gave him that stands for “I know everything.”

If the launch occurs as scheduled on Sunday, the Crew Dragon will dock at the International Space Station on Monday at about 11 p.m. Eastern time.

The launch occurs when the orbit of the space station passes above the launchpad. However, it takes hours for the capsule to catch up with the space station, which is traveling at more than 17,000 miles per hour. Once the capsule gets near the station, its computer on board will complete a series of maneuvers to safely bring it in proximity to the outpost. Then it will carefully dock with one of the station’s ports that allow astronauts to enter.

Even after docking, it takes the astronauts hours to ensure there are no leaks and to equalize the pressure between the two spacecraft before the hatch is opened, and the new residents can finally enter the space station. That will occur around 1:40 a.m. on Tuesday, and the astronauts will hold a brief boarding ceremony with the station’s current crew.