A Jack Russell who survived being shot and stabbed has landed a new job as a wellbeing dog with the police.

Buddy, 10, was used to ‘rile’ fighting dogs before he was rescued by Chief Inspector Jayne Forrest from South Yorkshire Police during a raid in Doncaster.

The traumatised dog was in a terrible condition after his owners sliced his tail off and left him infested with fleas, ticks and worms.

His body was also peppered with air rifle pellets. RSPCA inspectors feared they would be unable to save the pup.

After CI Forrest pitched in to nurse him back to health, he is now helping officers cope with stress and trauma.

A spokesperson for the force said: ‘Our wellbeing dogs are deployed to any teams who have been exposed to danger, stress or trauma in the hope they’ll provide some light relief and a much-needed distraction.

‘Buddy is still understandably a little nervous around the rest of the Wellbeing Dog team, but he’s a lovely calming presence.

‘The team is just one aspect of the wellbeing support offered to police officers, but they are certainly the cutest.’ 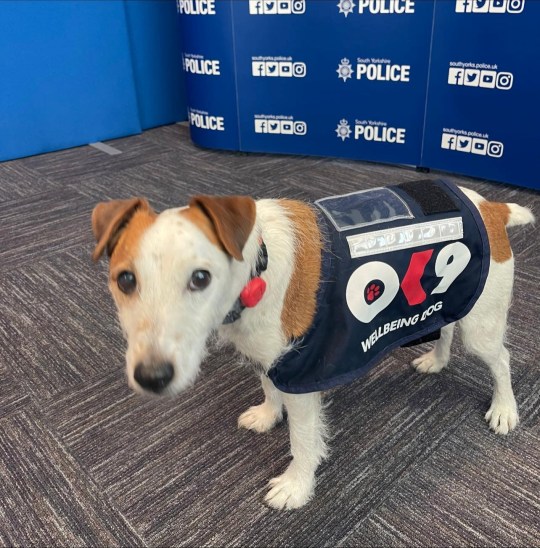 Detectives have been cracking down on distressing pit bull fighting arenas for years.

The Police Treatment Centre in Harrogate, North Yorkshire, is one centre using Buddy to help officers from all over the UK.

‘They see and hear things that most people won’t see in a lifetime.’