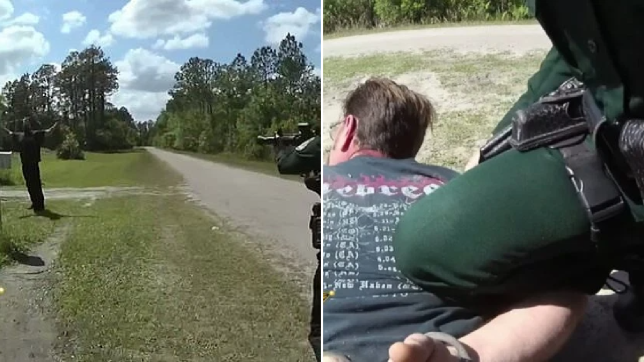 Aaron James Thayer yelled ‘I love you’ as deputies arrested him for chasing and threatening to kill his ex-girlfriend (Pictures: Flagler County Sheriff’s Office)

An ex-boyfriend who was taken down by sheriff’s deputies for terrorizing his former girlfriend cried ‘I love you!’ as he was arrested outside her home. Aaron James Thayer, 39, was chasing his ex with a loaded handgun when deputies rushed to the front yard.

Body camera footage from the Flagler County Sheriff’s Office captured the moment on Saturday that the deputies in Florida yelled at Thayer to get on the ground.

‘This is ridiculous, it’s my fucking house’, Thayer replied, putting his hands behind his head. The stalker also asked, ‘For what’?

Seeing Thayer refuse to get on the ground, a deputy knocked him down with a taser. The deputies ordered him to roll over on his stomach and put his hands behind him. As the deputies handcuffed Thayer, one of them noted, ‘He’s got a fucking gun in his waistband’!

Pinned to the ground, Thayer said, ‘Oh my god. This is not even fair’. Then looking around, he said, ‘I love you, what the fuck? Unbelievable. I did nothing. What the fuck’. Thayer repeated his words, which appeared to be directed at his estranged girlfriend.

‘What the fuck, I love you’! Thayer shouted. ‘I came here for you. I can’t believe you. What the fuck’?

The video then shifted to show Thayer standing next to a deputy vehicle and asking, ‘Where do I go from here? For real. In jail for what’? A deputy is heard replying that it is because he threatened to kill. Thayer gestured in disbelief and shook his head as he stepped into the backseat of the vehicle.

Despite his protestations of love, Thayer allegedly previously sent texts to the woman saying, ‘Imma kill you’ and ‘I’m coming down and I’m gonna fix this for ever’.

He was apparently in Connecticut for work and drove overnight to Florida.

The woman called 911 on Saturday afternoon and claimed that Thayer was armed, broke into her home, grabbed a handgun from her nightstand and cocked it, according to a sheriff’s office press release.

Thayer is charged with attempted murder, making written threats to kill or injure, possession of a firearm by a convicted felon and resisting an officer without violence.