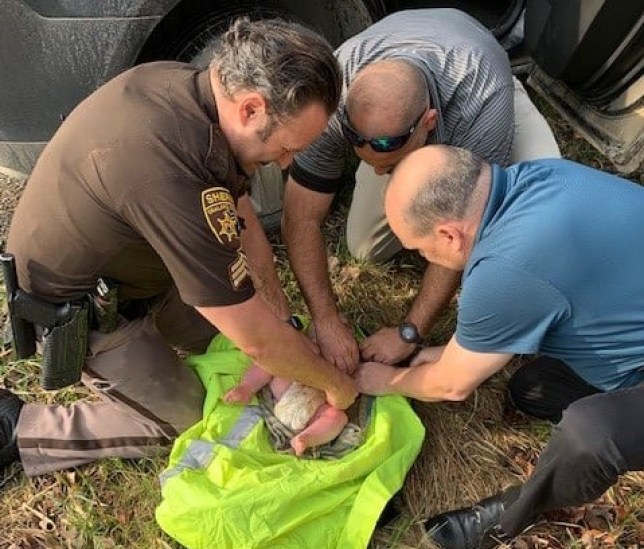 A four-month-old boy was lying face-down in the woods and his body was cold and wet the moment that sheriff’s deputies found him. The infant was rescued after neighbors called 911 to report a distraught woman thinking someone was chasing her with guns, who turned out to be his mother.

The boy ‘was in a hypothermic state’, a dangerously low body temperature and medical emergency when heat is lost faster than it can be produced, the Oakland County Sheriff’s Office wrote in a Facebook post. He was found on the banks of an Orion Township creek in Michigan on Wednesday morning.

Deputies changed the infant out of his wet sleeper and wrapped him with warm blankets before taking him to Saint Joseph Mercy Health System for treatment. He was kept at the hospital overnight and soon in ‘good condition’, the post stated. He is being cared for by child protective services.

Neighbors who dialled 911 said the woman was ringing their doorbells and hiding in bushes. Waldon Middle School staff also reported a ‘frantic woman’ pounding on the locked schoolhouse doors. Deputies then found an Orion Township resident, 37, and tried to calm her down. During questioning, they discovered she had an infant son and that she had burrs on her pants, possibly from being in a wooded area.

Deputies began searching within a mile of the woman’s home, the school and neighbors who called. Within 30 minutes, the K-9-assisted search effort was successful in finding the boy, ‘cold and wet but breathing’, according to the post. It was not immediately known how long the boy was abandoned there.

‘“Thankfully, deputies were able to determine a baby was missing, which triggered an immediate large response and search, and they were able locate the child’, Oakland County Sheriff Michael Bouchard stated. ‘Their quick work avoided what could have been an unspeakable tragedy’.

Deputies are seeking a warrant to arrest the boy’s mother on suspected child abuse and believe she may have abused prescription drugs.