Stewing resentment over a government lockdown in Shanghai is bolstering a fringe idea: independence for China’s most cosmopolitan city.

Over much of the past month, as the world has shed Covid-19 restrictions, 25 million Shanghainese have been confined to their homes to crush an outbreak. The paralysis of China’s richest city has astounded its urbane residents, who are normally spoiled for choice with 100,000 restaurants but are now scrounging for food.

This painful episode is providing a ragtag group of pro-independence activists born in the city but living in such places as New York and London new urgency to promote their unconventional plan.

How receptive people in business-minded Shanghai itself might be to such a radical idea is harder to determine, though its residents complain that they are victims of a politicized approach to science designed for less-capable corners of the nation. Angered at central-government orders to halt commercial life, many in Shanghai see the situation through the prism of a longstanding tussle with Beijing over national importance, the kind of pragmatism-versus-politics battle seen between New York and Washington.

As Shanghai remains locked down during China’s biggest Covid-19 outbreak, residents are taking to social media to vent about a shortage of food and are bartering with neighbors. Anxiety and hunger are prompting many to question Beijing’s pandemic strategy. Photo: Chinatopix/AP

Viral videos of residents shouting down government representatives from their balconies, and other signs of public resistance to President

“Hungry makes angry,” said Zhang Min, a Shanghai-born New Yorker who has spent recent years agitating for his hometown to declare itself an independent nation.

Hoisting a flag proposed for the independent city-state, the Republic of Shanghai, which is modeled on the colors that flew over sections of the city as a colonial outpost more than 150 years ago, Mr. Zhang plopped into a lawn chair facing China’s Consulate in Manhattan on a recent afternoon. “I have to let the Shanghai people know there is someone in New York who supports them,” he said. “I know I can’t give them food, but this I can do.”

Mr. Zhang, primarily known by his online nickname, “heanquan,” has seen a recent bump in his more than 25,000 followers on Twitter and elicited this week an occasional thumbs-up from ethnic Chinese passersby while demonstrating at Times Square.

Shanghai is a Chinese New York, though with three times as many people and spread over an area eight times bigger. It is a singular economic force, boasting the world’s busiest container port and longest subway system. Hollywood directors often cast its bright vista of skyscrapers as the near-future for such films as “Mission: Impossible III.” Its people, many of whom are haughty and cliquey, speak a dialect unintelligible to most other Chinese and prefer their delicacies sweet, rejecting as unrefined the salty, spicy tastes popular elsewhere in the country.

A legend illustrates the city’s sense of superiority: Shanghai is the head of a dragon that stretches across China.

As a political movement, the nascent Shanghai independence drive is a blip. The chance is zero that a section of China’s eastern coast could actually secede, but even half-serious talk reflects deep frustrations in Shanghai and among its global diaspora over the city’s recent humbling.

Zhang Min with a proposed Shanghai flag derived from a design used in the 19th century, when much of the city was run by Britain, the U.S. and others.


While residents take pride in their city as organized and entrepreneurial, they have been horrified by the logistical struggle to feed them during a lockdown many see as orchestrated by Beijing. They have labeled neighborhoods’ organization of food distribution as acts of self-rescue, a rebuke of a state-run media narrative that government authorities are managing the crisis.

Ever since the Emperor Qin Shi Huang unified warring states as one nation in 221 B.C., the leaders of China have been judged by their ability to hold it together. Top officials demonstrate reflexive fury at criticism of their policies regarding places such as Tibet and Xinjiang, where allegiance to Beijing has limits, not to mention Hong Kong or Taiwan.

How realistic is a movement for independence in Shanghai? Join the conversation below.

The platform of the Shanghai National Party, the independence movement’s organization, counters that view and argues that the metropolis is at its root a 19th-century European colonial construct, not an ancient Chinese city such as Beijing. Its members call for restoring the Western-style governance Shanghai had as a colonial trading port starting in the 1840s.

“There was a significant tradition of parts of Shanghai operating as a place that was physically in China but really stood apart,” says Jeffrey Wasserstrom, an authority on the city’s history at the University of California, Irvine.

Mr. Xi, the Chinese president, warned against breakaway notions during a 2017 Hong Kong address during public demands there for democracy. Any effort counter to national sovereignty “is absolutely impermissible,” he said. 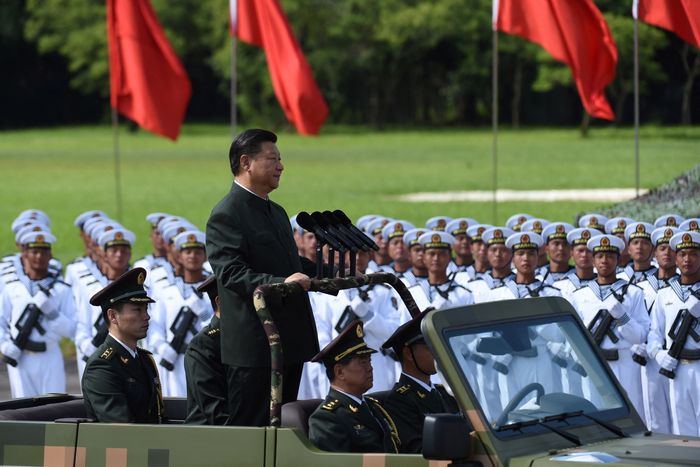 President Xi Jinping, reviewing a military unit in Hong Kong in 2017, has warned that any effort counter to national sovereignty is prohibited.

Mr. Zhang, a balding 60-year-old with a wispy beard dangling below his chin, said he had been on the path to a career as a surgeon in Shanghai but was rattled by China’s 1989 crackdown at Beijing’s Tiananmen Square. He eventually immigrated to New York, where he has worked as a licensed acupuncturist. He became a citizen in 2010 and got active in Chinese online pro-democracy forums.

Since then, Mr. Zhang has emerged as a fixture at demonstrations against Beijing in front of the United Nations and in the Chinatown of Flushing, Queens, along with dissident Tibetan, Uyghur, Taiwan and Hong Kong activists and members of the banned spiritual group Falun Gong. In recent weeks, he has toted a sign that refers to Shanghai’s lockdown as murder.

The Shanghai movement initially seemed like a group mainly intent on teasing China, said Ilshat Kokbore, vice chairman of the rights group World Uyghur Congress, which wants to create a separate homeland for its ethnic group in the Xinjiang region. But Mr. Kokbore said he has since given the Shanghai National Party around $100 because “this movement is gaining some attention and is now well known in the dissident society.”

Shanghai-born Edward Wu said the extreme lockdown is part of the reason he decided to join Mr. Zhang for the first time across from the Chinese Consulate on a recent day, after reading his work online over the past few years. “Many people think if Shanghai is independent, it will be better,” the 32-year-old said. A team preparing to disinfect a residential compound in Shanghai’s Huangpu district this past week.

Mr. Zhang said the party has received donations from about 100 members. He provided three years of tax returns, showing that the party reported balances of several thousand dollars, including about $1,700 for the most recent year. Some supporters post photos of themselves on Twitter holding signs advocating Shanghai independence, often with their faces obscured.

A spokesman for China’s Embassy in Washington, Liu Pengyu, said by email that he hasn’t heard of the Shanghai National Party. While he acknowledged that the pandemic has affected normal life in the city, authorities are confident it can be contained soon.

Under current plans, the Republic of Shanghai would adopt a flag modified from insignia dating to 1863 for an area of the city governed by an elected council of British and American stalwarts. Britain gained dominion over Shanghai’s riverfront, along with part of Hong Kong, after defeating Qing dynasty China in the Opium Wars. The U.S., France and other world powers likewise muscled into Shanghai to claim what they called concession territory.

Officially in China, these colonial carve-outs began the country’s “century of humiliation.” To supporters of its independence, Shanghai came of age under Western management; they point to its showpiece waterfront architecture known as the Bund, Mr. Zhang’s favorite part of town, which he last visited in 2010.

film “Empire of the Sun.” As Western influence in Shanghai waned, Mr. Zhang’s family suffered. His grandmother was killed in a wartime raid, and his grandfather is thought to have died a violent death during the Cultural Revolution, he said.

“I always say Shanghai should leave China and come back to Europe,” said Mr. Zhang.