A three-judge panel in a court in the Ukrainian capital found Vadim Shishimarin, a Russian tank-unit sergeant, committed premeditated murder when he shot and killed Oleksandr Shelipov, a civilian in the Ukrainian village of Chupakhivka. He was also ordered to pay for the costs of the trial.

Sgt. Shishimarin, who is 21, had admitted in court to fatally shooting Mr. Shelipov, but said during the trial he didn’t pull the trigger with the intent to kill. He was also convicted of violating international laws of war.

“The accused carried out the order and fired several shots and killed a civilian,” Judge Serhiy Agafonof said, while announcing the verdict. “Shishimarin violated the laws and customs of war provided by the Geneva convention.”

The trial of Sgt. Shishimarin offered the first glimpse of how Ukraine will mete out justice during the war with Russia—and provided a model that prosecutors will hope to follow in future cases.

Under Ukrainian law, someone convicted of murder isn’t always eligible for life imprisonment. This case qualified because it occurred in a war-time context. The prosecutors’ decision to push for a life sentence is a signal of their intent to pursue war-crimes cases with vigor.

Authorities here say they are investigating more than 10,700 potential war crimes involving more than 600 suspects. Few of those suspects, however, are in Ukrainian custody.

Kremlin spokesman Dmitry Peskov said Moscow was worried about the fate of the soldiers, but said Russia had little recourse in such cases at the moment.

“We have no possibility of defending his interests on the ground,” Mr. Peskov said of Sgt. Shishimarin. “It doesn’t mean we won’t look into trying through different channels.”

Sgt. Shishimarin’s case moved swiftly through court, with just 10 days between his initial appearance and the verdict.

Some human-rights groups have pointed to the speed at which the case moved as a reason to question whether he was able to get a fair defense.

As the verdict was read, Sgt. Shishimarin stood quietly in the defendant’s box, listening as the judge spoke.

Judge Agafonof said that he didn’t believe Sgt. Shishimarin’s testimony that he hadn’t intended to kill Mr. Shelipov. He also said that, because none of the other soldiers telling him to shoot was his commanding officer, he could have disobeyed the order.

“The order was illegal,” Judge Agafonof said. “Realizing that this order was clearly criminal, Shishimarin could have refused to comply…he had the opportunity to get out of the car, or to shoot nearby” and avoid hitting Mr. Shelipov.

A three-judge panel delivered the verdict on Vadim Shishimarin and sentenced him to life in prison.

“The judge didn’t take a few important aspects of the case into account,” Victor Ovsyannikov, Sgt. Shishimarin’s defense counsel, said after the verdict was announced. “I still think he didn’t have an intention of civilian murder. I think evidence and witnesses confirmed it, but judges didn’t think so.”

Andrii Syniuk, the lead prosecutor in the case, had argued for a life sentence for Sgt. Shishimarin, and said the verdict was fair.

“The sentence in the Shishimarin case is absolutely legal and justified,” said Mr. Syniuk. “He committed a crime and killed a civilian who didn’t provoke the soldiers and wasn’t a threat to them.”

He also rejected concerns from some human-rights groups that Mr. Shishimarin wasn’t given the chance to properly defend himself.

Mr. Syniuk acknowledged that the trial was “pretty quick,” but said “the defense never appealed that they were restricted by time.”

Last month, Ukrainian prosecutors filed criminal charges against 10 Russian soldiers accused of taking civilians hostage and mistreating them in the Kyiv suburb of Bucha. The prosecutor general said earlier this month that about 40 suspects had been identified, but only a few were in custody. 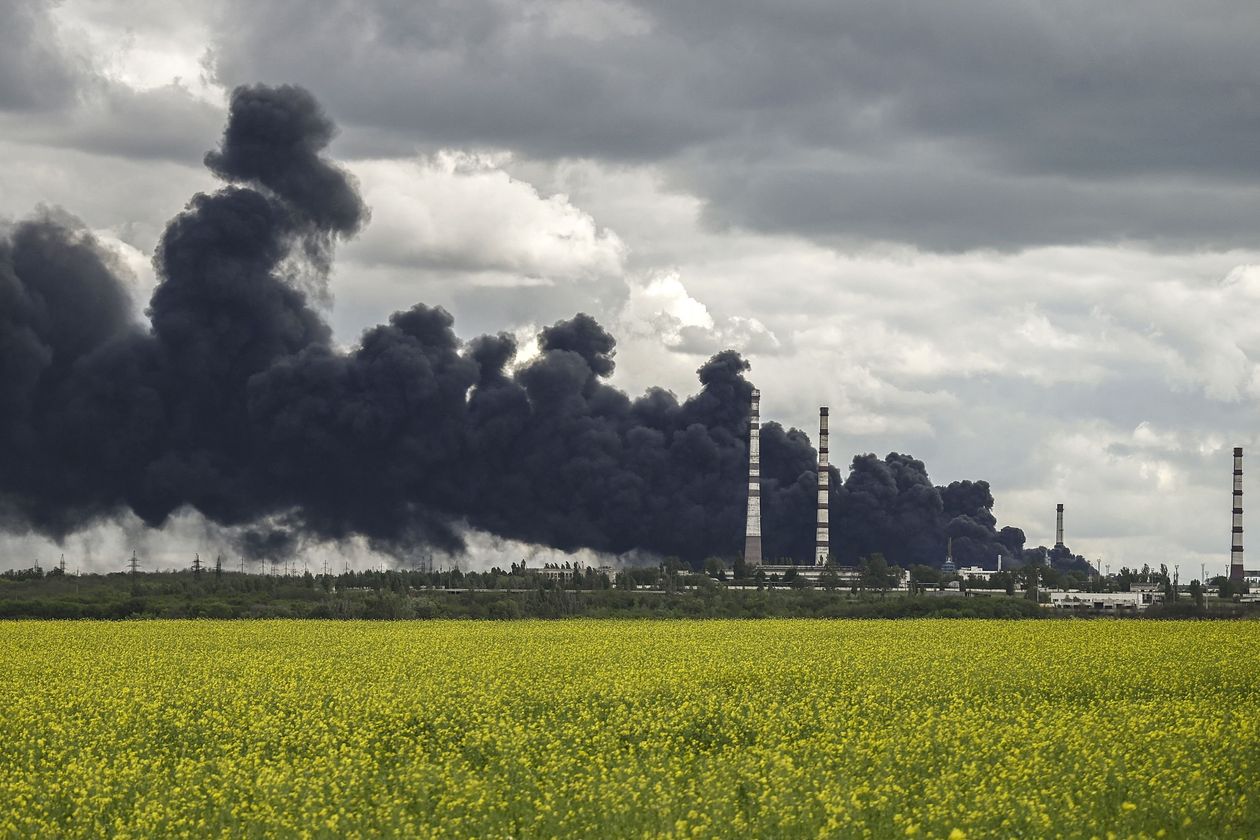 Smoke rose from an oil refinery after an attack outside the city of Lysychansk in the eastern Ukrainian region of Donbas on Sunday. Russian service members around the Azovstal steel plant in the southern port city of Mariupol, Ukraine, on Sunday.

Mr. Shelipov’s widow, Kateryna Shelipova, also said before the sentencing that she hoped for a life sentence, but that she would accept if Mr. Shishimarin were returned to Russia as part of a prisoner exchange.

Sgt. Shishimarin spent the proceedings in a fiberglass defendant’s box, where he often whispered with an interpreter. He said little in his own defense, apart from offering that he didn’t shoot with the intent to kill, and on Thursday apologized to Ms. Shelipova.

“I admit guilt,” Sgt. Shishimarin said. “I understand that you cannot forgive me. But I apologize.” 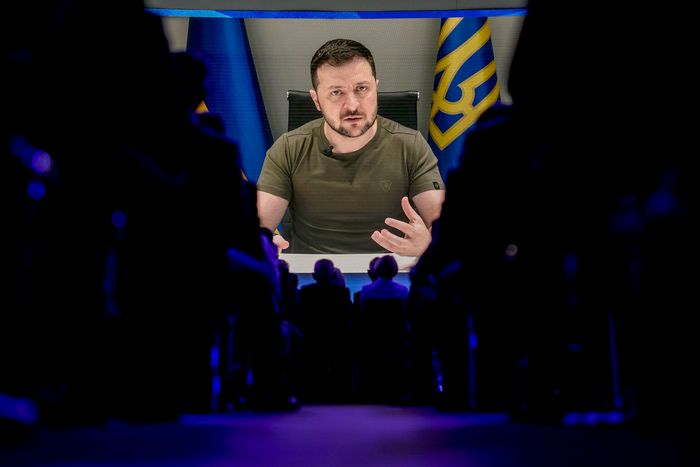 Ukrainian President Volodymyr Zelensky made a video address to the World Economic Forum in Davos, Switzerland, on Monday.

meanwhile, laid out the extent of his country’s losses in an address to the World Economic Forum in Davos, Switzerland, on Monday, saying 87 people were killed in a Russian airstrike on the village of Desna in the Chernihiv region last week.

On Sunday, Mr. Zelensky said during a news conference that up to 100 Ukrainian soldiers could be dying each day on the front lines in the east of the country, where Russia has refocused its forces after failing to take Kyiv in the early days of the war. The Ukrainian leader said that as of April 16, between 2,500 and 3,000 Ukrainian soldiers had been killed with up to 10,000 injured.

Speaking to the WEF by videolink Monday, Mr. Zelensky said the world’s response to Russia’s invasion of Ukraine would determine whether other major powers would seek to gain an advantage through aggression, and called further sanctions, including a complete embargo on Russian oil and stronger measures to disconnect all Russian banks from global financial system.

“This is the moment when it is decided whether brute force will rule the world,” Mr. Zelensky said, adding that “if aggressors lose everything, countries would lose motivation to start wars.” 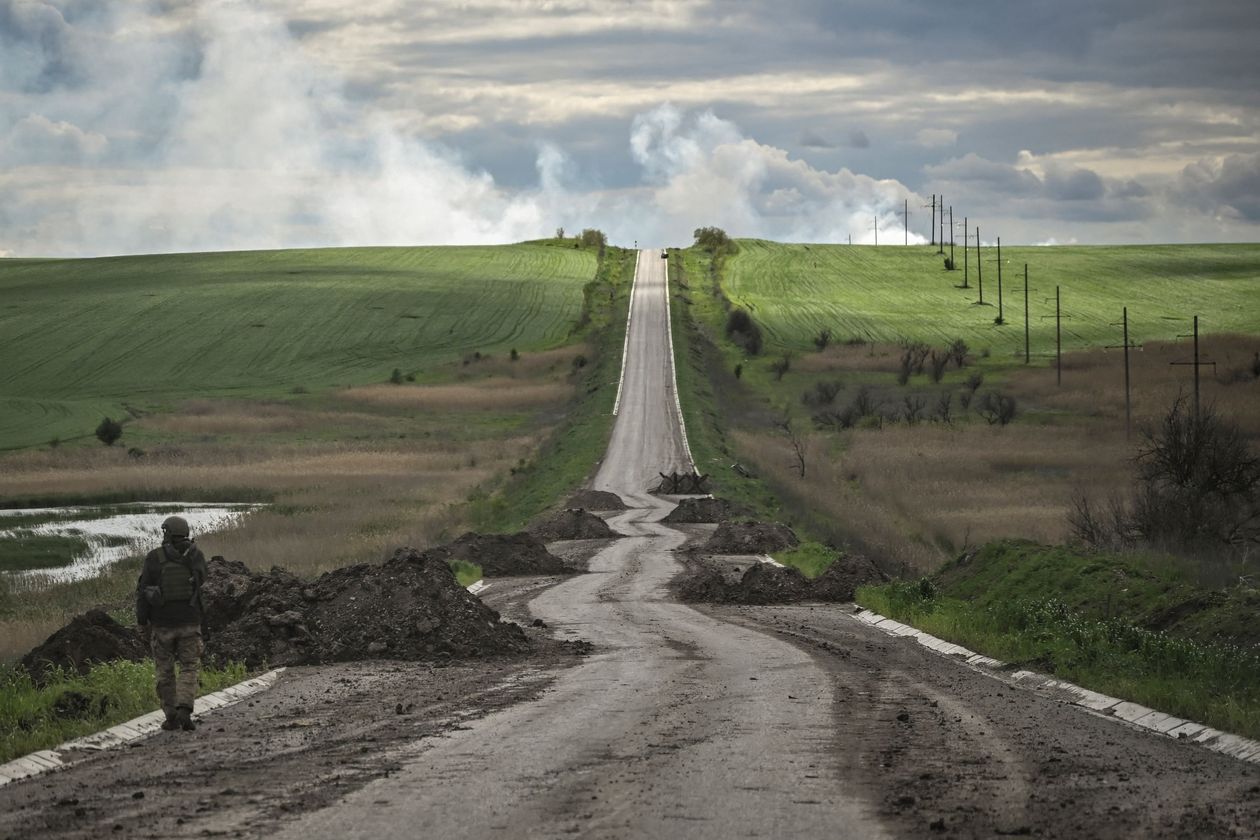 A road in the eastern Ukrainian region of Donbas on Sunday. The country’s president said 100 Ukrainian fighters could be being lost each day on the front lines in the east.

—Thomas Grove and James Hookway contributed to this article.