PARIS—Russia’s military buildup is rekindling tensions over whether Europe should take a bigger role in its own defense aside from the trans-Atlantic alliance with the U.S. that has underpinned the region’s security in the postwar era.

The divisions surfaced Wednesday as President

of France marked his turn at the helm of the European Union’s rotating presidency with a sweeping speech calling on Europe to chart its own course.

“The security of our continent demands a strategic rearmament of Europe as a power of peace and equilibrium, particularly when it comes to dialogue with Russia,” Mr. Macron told a session of the European Parliament in Strasbourg.

The French leader said the EU should spend the coming weeks developing a proposal to create “a new order of security and stability,” while consulting with the North Atlantic Treaty Organization. “We must build it between Europeans, then share it with our allies within the framework of NATO. And then offer it for negotiation to Russia,” he said.

Mr. Macron’s remarks unsettled officials in the bloc’s Eastern nations, who have been wary of Europe developing its own separate defense capability. They fear the effort could weaken the U.S.-backed security umbrella provided by NATO.

“It cannot be the situation that the EU has one position and NATO has a totally different one,” said

Latvia’s veteran foreign minister. “Let’s face it, the way the United States conducts this business—the level of transparency and coordination—is something that I can really praise.”

U.S. Secretary of State Antony Blinken arrived to give a press conference in Kyiv on Wednesday after meeting with Ukrainian officials over the crisis with Russia.

met with Ukraine’s president on Wednesday in Kyiv, seeking to reassure him of unified support from the West while warning of a possible Russian invasion. Mr. Blinken is scheduled to meet his counterparts from Germany, France and Britain on Thursday.

Mr. Macron has been pushing the EU for years to develop its own capability on defense, and France’s presidency of the bloc has given him a new lever to advance the idea. Such plans, however, have been greeted with little enthusiasm by Germany and other major European economies, which have been happy to let the U.S. take the lead in deterring Russian aggression on the bloc’s eastern flank.

U.S. officials have said they believe a Russian attack on Ukraine could be launched any time between now and mid-February, although they acknowledge that it is unclear if Russian President

has decided to attack Russia’s neighbor again. Moscow in 2014 sent in soldiers to annex Crimea from Ukraine and has been backing separatists in the country’s eastern provinces.

At a meeting last week in Brest, France, European foreign ministers said they remained open to dialogue with Russia but stressed their response to the Ukraine crisis lay through close coordination with NATO and the U.S. and by defending “the major principles underpinning European security.”

There was no consensus on what the EU role should be nor on setting out European demands for Russia that would run on an independent track, according to people involved in discussions. 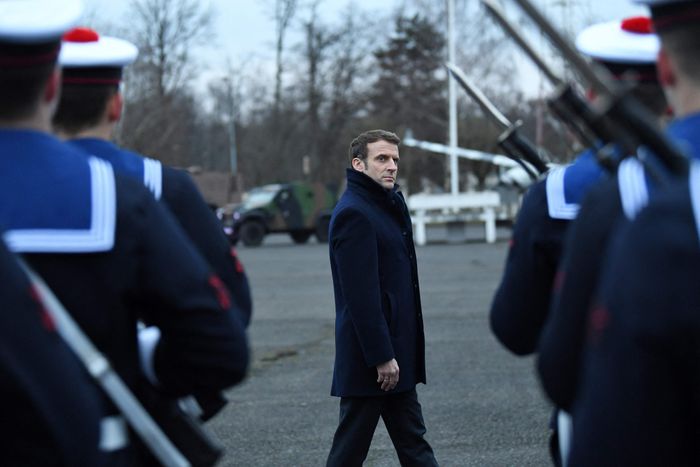 European-led efforts to resolve the crisis have run into a wall of Russian opposition.

Moscow has ignored the calls from Paris and Berlin to relaunch the Normandy peace talks on Ukraine, in which France and Germany are directly involved. European officials say the Kremlin is attempting to sideline European powers and negotiate directly with Washington.

Countries like Poland, Lithuania, and Estonia have doubts over how much Europe’s largest countries—particularly France and Germany—share their more hawkish views on how to manage Russia. Those governments feel they will have more say and find more like-minded allies within NATO, which has its own direct relations with Moscow, than within a French-led attempt to negotiate with Russia.

“We are really looking to keep this within the NATO framework,” said a Polish government official. “We are thinking this is sending mixed signals.”

At worse, Eastern governments worry Mr. Macron has helped Mr. Putin score an important victory, by revealing cracks in the Eastern alliance. Europe is in a state of political flux, with a new German government still settling into power, while France, Italy, and Hungary are all headed into national elections.

“We have to stand firm and be united,” said Sławomir Dębski, director of the Polish Institute of International Affairs, a Warsaw-based think tank close to the ruling party. “Definitely what Putin wants to see is a kind of room to drive a wedge between European allies or between the United States and Europe, or the West and Ukraine.”

A military buildup along the Ukrainian border is further straining ties between Russia and the U.S., after clashes over cybercrime, expulsions of diplomats and a migrant crisis in Belarus. WSJ explains what is deepening the rift between Washington and Moscow. Photo Composite/Video: Michelle Inez Simon

Write to Matthew Dalton at Matthew.Dalton@wsj.com, Laurence Norman at laurence.norman@wsj.com and Drew Hinshaw at drew.hinshaw@wsj.com