Pictures released by the Russian military claim to show tanks being moved away from the border – but the UK isn’t buying it (Picture: AP)

The UK fears Russia is still preparing to invade Ukraine, despite Vladimir Putin’s claims he is pulling some troops back.

The prime minister and the head of military intelligence have both dashed hopes the crisis could be easing this evening.

Western leaders cautiously welcomed the Russian president’s announcement earlier this week that some soldiers close to Ukraine’s border were returning to their borders.

But the mood music has darkened again, with Western intel not finding evidence the promised withdrawal is under way.

In a rare public statement, Lieutenant General Sir Jim Hockenhull, the chief of defence intelligence, said military hardware was still being positioned on the border.

He added: ‘We have not seen evidence that Russia has withdrawn forces from Ukraine’s borders.

‘Contrary to their claims, Russia continues to build up military capabilities near Ukraine. 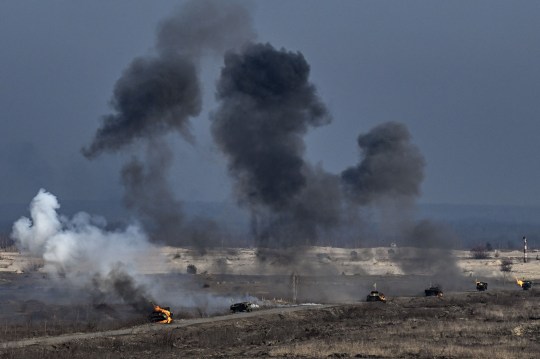 Ukrainian forces have been training in preparation for any incursion over the border (Picture: AFP)

‘This includes sightings of additional armoured vehicles, helicopters and a field hospital moving towards Ukraine’s borders.

‘Russia has the military mass in place to conduct an invasion of Ukraine.’

After the call, a Downing Street spokesperson warned the outlook remains gloomy and that an international response may still bed needed.

They said: ‘The prime minister said there is currently little evidence of Russia disengaging, and they agreed any invasion of Ukraine would have catastrophic and far-reaching consequences.

‘The leaders reiterated states’ responsibility to abide by their obligations under the United Nations charter and to respect the sovereignty and territorial integrity of UN members.

‘They agreed to continue working closely together to pursue an urgent diplomatic resolution and avert a disastrous military escalation and humanitarian crisis.’ 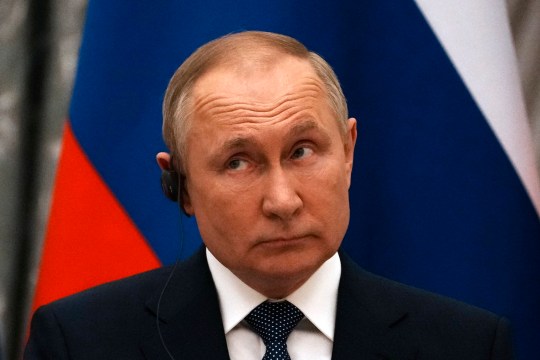 The world continues to try and work out whether or not Vladimir Putin is bluffing (Picture: AP)

Mr Putin’s used a staged meeting with his foreign secretary to publicly signal he is willing to continue with diplomatic talks to resolve the crisis.

Speaking after a meeting with German chancellor Olaf Scholz, he confirmed he’d given the order for some troops to return to their bases.

The Kremlin continues to publicly deny planning to invade, instead claiming soldiers are taking part in military drills.

But despite seemingly striking a more conciliatory tone, he ramped the rhetoric up towards on the Donbas region, accusing Kyiv of ‘genocide’.

Pro-Russian forces have been at war with the Ukrainian government since 2014, when a pro-European government took power following a revolution and Russia annexed Crimea.

The US State Department warned today that Russian officials are planting stories in the press that could be used as a pretext for an invasion of Ukraine.

Earlier today, the Russian Investigative Committee said it was opening an investigation into unverified reports of ‘unmarked mass graves of civilians’ in the east of Ukraine.