WASHINGTON—The barrage of rockets launched at the U.S. Embassy in Baghdad Sunday was the largest attack on the capital’s Green Zone since 2010, numbering 21 missiles, the top U.S. military commander for the Middle East said.

Iraq’s president has denounced the rocket firings as a “terrorist act” and said that the targeting of diplomatic missions had tarnished the nation’s reputation.

An after-action review by the U.S. Central Command, however, indicated the attack was much larger than the eight rockets than the Iraqis initially reported.

The rocket attack appears to have been countered by the American C-RAM radar-guided defensive systems that the U.S. has deployed to protect the embassy, American officials say, and other rockets missed their mark.

No Americans were hurt in the attack, which damaged two buildings and a gym which troops and embassy personnel use for exercise. It wasn’t yet clear if any personnel were inside the gym at the time of the attack, about 8:30 p.m. local time. Several cars parked nearby in the embassy compound were also damaged.

All 21 rockets hit inside the heavily fortified Green Zone—where the embassy and a base hosting troops from the U.S.-led coalition are located—with about half of those rockets landing inside the American embassy compound, an official said.

One Iraqi soldier was injured and vehicles and a generator at an Iraqi apartment complex near the U.S. Embassy complex were also damaged, Iraqi security officials said. 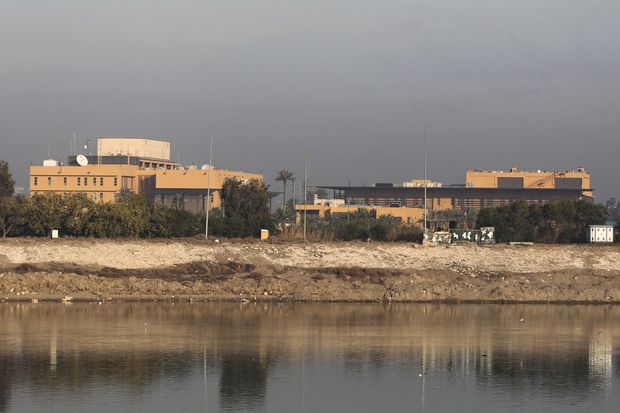 The U.S. embassy across the Tigris river in Iraq’s capital Baghdad on Jan. 3.

who leads the U.S. Central Command, which oversees U.S. military operations in the Middle East, said it wasn’t clear if the attack was orchestrated by a rogue militia or specifically directed by Tehran. U.S. officials said the weapons are believed to have been supplied by the Iranians, but no group has claimed responsibility for the attack.

“I do not know the degree to which Iran is complicit,” Gen. McKenzie told The Wall Street Journal Tuesday. “We do not seek a war, and I don’t actually believe they seek one either.”

In a statement Sunday, Secretary of State

blamed “Iran-backed militias” for the attack and urged the Iraqi government to bring them to justice.

On Wednesday, Mr. Pompeo, acting Defense Secretary Christopher Miller and national security adviser Robert O’Brien met to discuss options to dissuade Iran and the Shiite militias it supports from attacking U.S. personnel in Iraq, a U.S. official said. In September, Mr. Pompeo warned Iraqi officials that the U.S. was prepared to close its embassy in Baghdad if the rocket attacks didn’t cease.

Following the meeting at the White House, Mr. Trump wrote on Twitter, “Our embassy in Baghdad got hit Sunday by several rockets. Guess where they were from: IRAN.”

“Some friendly health advice to Iran: If one American is killed, I will hold Iran responsible,” he wrote.

The attack comes during a critical period in the U.S. relations with Iran as the Trump administration has sought to step up the pressure on Tehran and the incoming Biden administration has signaled it plans to re-engage diplomatically with Iran—trying to restore the 2015 Iran nuclear agreement and then seek more stringent constraints on Iran’s nuclear program.

Tensions have also been raised by an attack earlier this month on an oil tanker docked at the Saudi port city of Jeddah, which U.S. officials believe was carried out by a remotely piloted boat provided by Iran to the Houthi Yemeni rebel militia.

Earlier this week, a U.S. cruise-missile submarine entered the Persian Gulf. That deployment was part of a broader Pentagon effort to signal to Tehran it is prepared to project power in the region despite a presidential transition at home, U.S. troops reductions in Iraq and Afghanistan, and the U.S. government’s efforts to cope with a global pandemic.

The deployment of sub, the U.S.S. Georgia, has drawn particular attention since the Pentagon has long been reluctant to discuss the operations of its nuclear-powered submarines.

In this case, however, the Navy released a photo of the submarine as it navigated the Strait of Hormuz, noted that it was accompanied by two U.S. guided-missile cruisers and issued a statement noting how many weapons it is able to carry: 154 Tomahawk nonnuclear land-attack cruise missiles.

In Iraq, an array of new militias have claimed responsibility for dozens of attacks on Iraqi convoys transporting equipment for the U.S.-led coalition. Officials and analysts said the new militias provide cover for established Iran-backed groups, which sought to distance themselves from Sunday’s rocket attack.

The Iran-backed Kataib Hezbollah militia described the rocket attack on the Green Zone as “undisciplined.”

Earlier this month, the U.S. reduced its staff at the embassy as a precaution and in 2018, it closed the U.S. consulate in Basra, citing security risks.

In the past, the U.S. red line for responding militarily to a rocket attack in Iraq has been harm to American personnel, which didn’t occur Sunday.

Paramilitary leader Qais al-Khazaali said pro-Iranian “resistance” groups had agreed not to target the U.S. Embassy. He insisted, however, that bases where troops are deployed elsewhere in Iraq remain a legitimate target.

“The time to respond has not yet arrived, but it won’t be long,” he said.

Also on the horizon is the Jan. 3 first anniversary of the U.S. drone strike in Baghdad that killed Gen. Qassem Soleimani, the head of Iran’s paramilitary Quds Force whom the Trump administration accused of plotting against the U.S.

As the U.S. monitors the uneasy situation in Baghdad, its relations with Iraq have been strained by President Trump’s decision to pardon four military contractors accused of killing more than a dozen Iraqi civilians in a 2007 episode at the traffic circle in the capital. Three of those contractors were found guilty of manslaughter in a 2014 trial while the fourth was found guilty of murder in a 2018 trial in the U.S.

Iraq’s Foreign ministry said the pardons didn’t take into consideration the gravity of the crime committed and “regrettably ignores the dignity of the victims and the feelings and rights of their relatives.” It said it would use diplomatic channels to urge the U.S. government to reconsider the decision.

—Isabel Coles contributed to this article.

Write to Michael R. Gordon at michael.gordon@wsj.com and Gordon Lubold at Gordon.Lubold@wsj.com