Residents ‘nearly had a heart attack’ after a huge 5G mast appeared in their cul-de-sac with ‘no warning’.

Claire Brophy said she returned home from work to the ‘rocket pole’ towering over her home in Balderstone, Rochdale.

Other neighbours spoke of their similar ‘extreme disappointment’ at the find.

Amy Openshaw told Manchester Evening News: ‘It isn’t nice to look at. When you’re in one of your rooms at the top of the stairs, it is there, in your face.

‘We literally went to work and came home and it was there. When all the leaves start dropping off the trees, I’ll see it more then.’

Even Rochdale Council agreed that it is an eyesore, describing it as an ‘incongruous and dominant feature’ when they refused the planning permission to build it last year.

However the decision was overturned and residents have claimed they came home from work to see the mast, which is within touching distance of their gardens.

One resident, who did not want to be named, insisted they were not a ‘NIMBY’ but wished they had been told about the pole. 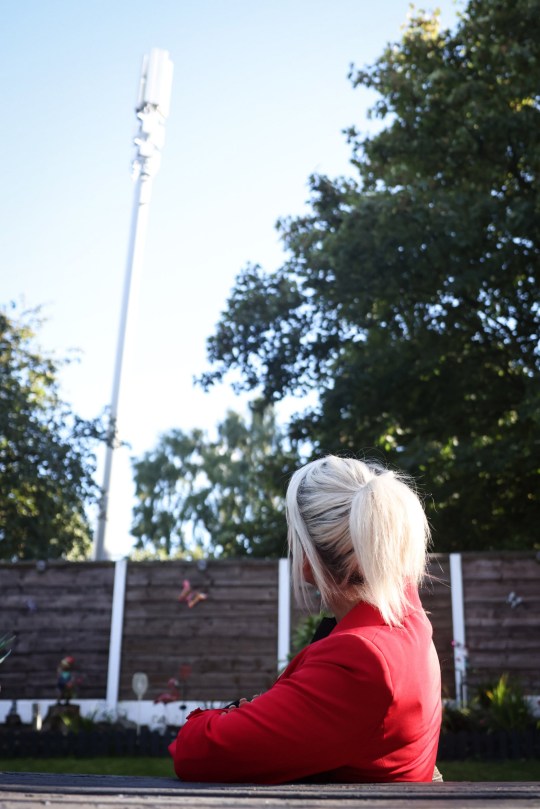 Clare Brophy came home from work to find a massive ‘rocket’ at the end of her back garden (Picture: Manchester Evening News)

They said: ‘I came home from work to find that this monstrosity had been erected at the back of my property.

‘We are extremely disappointed and angry that we were not given a chance to appeal this decision.’

Mobile infrastructure firm Cornerstone argued they ‘give great consideration to minimising the visual impact’ of their equipment, but Balderstone locals disagree.

The resident added: ‘There are other places in the same area where this could have gone causing less obstruction to neighbouring properties.

‘Unfortunately I’m aware it had to go somewhere and they are an eyesore wherever they go.’ 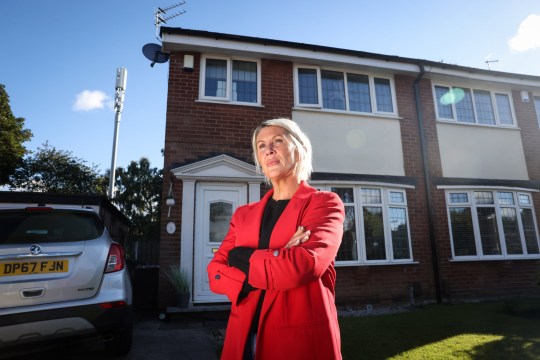 Rochdale MP Tony Lloyd says he will be contacting the government ministers responsible for the Planning Inspectorate to ask them to ‘urgently’ look into the matter.

‘Nobody should come home to find such a monstrosity with seemingly grossly inadequate consultation and no consideration for the view from her house,’ he said.’

Cornerstone said: ‘We proposed a base station in Balderstone, Rochdale, to provide essential network connectivity including 5G services to the area.

‘Unfortunately the proposed base station was refused by the Local Planning Authority [the council]. Following this refusal we reviewed all our options, but concluded that the proposed site remained the best option locally.’