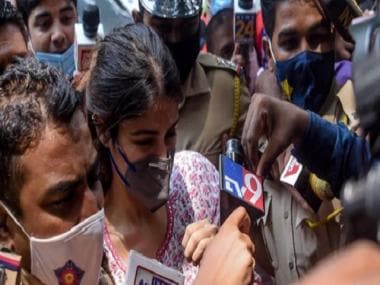 The persecution of Rhea Chakraborty, the actor’s one-time partner, borders on lunacy, if we are to cling to some notions of rationality and humanity

When the NDA was returned to power with an unassailable majority in 2019 – 303 members in the Lok Sabha – the talons that were partially sheathed during its first tenure became fully visible. There are three instances to demonstrate this.

The first, chronologically, is the Elgaar Parishad and Bhima-Koregaon case. On 31 December 2017, Elgaar Parishad meetings were held in Pune, preparatory to the bicentennial celebrations to mark on 1 January 2018 the victory of a combined British army detachment and a Mahar regiment against an army of the Peshwas. Since the Peshwas were Brahmins and the Mahars then considered untouchables, this victory became emblematic for the latter.

Since then, this anniversary has been celebrated regularly. The Elgaar Parishad meetings in this case were attended by, among others, cultural, social and, specifically, Dalit activists. Speeches favouring Dalit emancipation and condemning the politics of Hindutva were made alongside plays, recitations and other performances. Two rallies had passed through the town before the meetings. The day had passed without incident.

The following day, Dalits congregated in large numbers at Bhima-Koregaon to celebrate the bicentennial. It was reported in retrospect that there were murmurs amongst upper-caste villagers about the event. Once it had started, the Dalit congregation was attacked and many people were injured. A bandh was called and protests broke out throughout Maharashtra. Two people were killed in clashes, one of them reportedly in police firing.

In the initial stages, the finger of suspicion pointed towards some Hindutva groups. Police began investigations on these lines and two people were identified as the people who organised and stoked the conflict. They were Manohar Bhide, aka Sambhaji and Guruji, and Milind Ekbote. The former, said to be a confidant of Modi, was never even questioned, while Ekbote was held, and later released on bail, but only after the Supreme Court passed strictures against the Pune Police.

Curiously, however, the investigation into the incitement of violence and the role of the Hindutva brigade were abruptly dropped despite a committee formed by the Pune Police, consisting of senior officers, submitting a report on 20 January 2018, which nailed Bhide and Ekbote for orchestrating the violence.

Even more curiously, the investigations took a huge detour practically ignoring the events of 1 January 2018 to focus on the uneventful programmes of 31 December 2017. A large number of people were arrested in tranches, including five activists in countrywide arrests at the crack of dawn on 28 August, in scenes reminiscent of less salubrious historical contexts. All the arrested people are in jail. The number incarcerated has now gone up to 15 with the arrest of three folk artistes – Sagar Gorkhe, Ramesh Gaichor and Jyoti Jagtap – on 7-8 September.

It was reported, moreover, on 6 September, that the National Investigation Agency (NIA) mailed one Partho Sarothi Roy, a molecular biologist at the Indian Institute of Science Education and Research currently working on the containment of the COVID-19 pandemic, asking him to be present for questioning in Mumbai on 10 September. Roy declined the ‘invitation’, citing important work. Though he has not spoken, his associates say he has never visited the Bhima-Koregaon area.

On 7 September, K Satyanarayana, a professor at Hyderabad’s English and Foreign Languages University, and KV Kurmanath, a journalist, were also sent NIA notices. Both are sons-in-law of Varavara Rao, a cultural activist who was jailed in the dawn raids of 28 August.

The net has been cast wide and is being cast wider – among those who have been drawn in are academics, lawyers and activists. They have one thing in common – Dalit rights activism. In the meantime, of course, the Hindutva leads have vanished, as they were meant to. We may not have suspected that this betokened the BJP’s systematically blighted version of the rule of law, had it not been for what’s happening with the Delhi riots cases.

It has been reported on Sunday that CPM general secretary Sitaram Yechury, Swaraj Abhiyan leader Yogendra Yadav, and academics Jayati Ghosh and Apoorvanand have been named in a supplementary chargesheet in the Delhi riots case. Their crime seems to have been ‘provoking and mobilising’ protests against the Citizenship (Amendment) Act (CAA), 2019. Though some confusion seems to prevail over the exact manner in which the names occur in the document, it appears to be part of a strategy to target people who have protested against a piece of legislation many consider unconstitutional.

This is of a piece with the calibrated way in which the two Special Investigation Teams constituted to investigate the riots have been functioning. The blatant bias in the proceedings should not, in the first place, cause any great surprise, given the track record of the two officers heading them. Quite apart from that, two classes of people have been disproportionately targeted to be arrested and proceeded against: young Muslim men and women, whether or not connected to the movement against the CAA and National Register of Citizens, and people closely associated with the movement, regardless of faith.

It is not quite a state secret that the proximate cause of the riots was an incendiary speech delivered by Kapil Mishra, the would-be Delhi MLA who had days before been trounced in the elections. It is beyond a shadow of doubt that it was the storm troopers of the Hindutva forces who began hostilities. It is beyond the same shadow of doubt that the bulk of the attacks on persons, properties and the arson and general mayhem were carried out by these storm troopers. It is, finally, also beyond doubt that the hugely preponderant loss to life, person and property was suffered by the Muslims.

If Mishra was the man who held the figurative smoking gun, the riots were enabled by an election campaign that was beyond sectarian and toxic, even by Hindutva standards. The men who led the way in making it so were men in responsible positions: minister of state for finance Anurag Singh Thakur, who exhorted his followers to shoot people they didn’t agree with (in his understanding, traitors) and Outer Delhi Lok Sabha member Parvesh Singh Verma, who told an audience that anti-CAA agitators would enter their homes to rape and kill their sisters and daughters. Beyond being taken off the campaign roster, no action against Thakur and Mishra (incitement to murder), or Verma (incitement to communal hatred) has been forthcoming. The majority of the rioters, pillagers, arsonists and, not to put too fine a point on it, murderers, too, are roaming free.

Still, we could conceivably discern in this maelstrom of illegality and insanity some coherent strategy. The Sushant Singh Rajput case takes arbitrary authoritarianism to an absurd level. The persecution of Rhea Chakraborty, the actor’s one-time partner, borders on lunacy, if we are to cling to some notions of rationality and humanity. It is the scapegoating of a no one in particular in the pursuit of designs that have nothing even remotely do with either her or Rajput.

The three objectives the BJP government is chasing are transparent: the desire to get even with the Shiv Sena, which is a practically stated goal; the attempt to generate mileage for the impending Assembly election in Bihar; and the desperate scramble to deflect attention from the gross mismanagement of the pandemic and the economy. The desperation of throwing on the Narcotics Control Bureau, having failed twice with the Central Bureau of Investigation and Enforcement Directorate is surreal. It signals that no one – dissident or compliant, active or passive, rebellious or complaisant – is safe, if his or her destruction affords the regime some gain. The BJP’s present strategy is all the more Kafkaesque for being speculative, if not notional, because there is no guarantee that this utterly unscrupulous stratagem will help the BJP win Bihar, unsettle the Thackerays or succeed in deflecting attention from the raging pandemic and the tanking economy.

Chakraborty’s father’s comment on these machinations is not one that a government that is even remotely responsible will ever want to hear: “Congratulations India, you have arrested my son, I’m sure next on the line is my daughter and I don’t know who is next thereafter. You have effectively demolished a middle-class family. But of course, for the sake of justice, everything is justified. Jai Hind.”