devotes himself to dealing with the coronavirus pandemic, Republicans are striving to elevate China policy as a top issue, pressuring him to take an aggressive stance as Americans’ opinion toward the global rival grows more negative.

Republicans positioning themselves as leading critics of Mr. Biden, chiefly those seen as considering a 2024 presidential run, have buffeted his nominees with questions about how they would deal with China. GOP lawmakers are proposing legislation to limit visas given to Chinese nationals and to crack down on American universities’ relationships with China. Some Republicans want the president to boycott the 2022 Winter Olympics in Beijing.

The goal, lawmakers and party strategists say, is to maintain pressure on Mr. Biden to confront China—and to make his policies a top issue for voters ahead of the 2022 midterm elections and the presidential race two years later.

“China poses the single greatest geopolitical threat to our nation over the next century,” said

(R., Texas), who ran for president in 2016 and who has tangled with several of Mr. Biden’s nominees. He tried to block the confirmation of Commerce Secretary

after she initially stopped short of promising to maintain the Republican Trump administration’s blacklisting of Huawei Technologies Co. Ms. Raimondo later called telecommunications equipment made by “untrusted vendors” a threat to the U.S.

Mr. Cruz said Mr. Biden’s choices for administration positions “raise serious questions as to whether this administration understands the threat.” He and other GOP lawmakers sharply questioned

the now-confirmed United Nations ambassador, over past comments on China.

A Gallup poll released this month put China’s unfavorable view among Americans at 79%, by far the worst reading since its polling began in 1979. Only Iran and North Korea scored worse. A recent Pew Research Center survey found that 48% of Americans said the U.S. should make limiting China’s power a top priority, up from 32% in 2018. 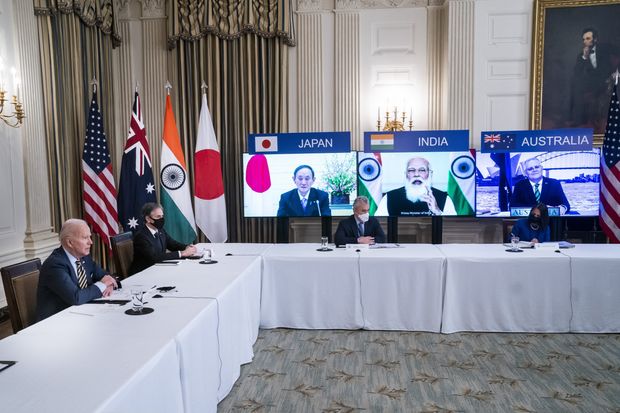 President Biden, left, convened a virtual meeting with the Quad, a strategic partnership including Japan, India and Australia that seeks to counter Chinese expansionism, at the White House on Friday.


Mr. Biden has called China “our most serious competitor,” and he has for now kept some of the

administration’s policies in place, including the steep tariffs at the heart of former President

“We’ll confront China’s economic abuses; counter its aggressive, coercive action; push back on China’s attack on human rights, intellectual property and global governance,” Mr. Biden said in his first foreign policy speech. “But we are ready to work with Beijing when it’s in America’s interest to do so.”

On Friday, the president convened a virtual meeting with the Quad, a strategic partnership including Japan, India and Australia that seeks to counter Chinese expansionism. Later this week, the Biden administration is expected to deliver a blunt message for China when top officials meet with counterparts in Alaska. The administration also seeks cooperation with China on curbing climate change and nuclear proliferation.

“President Biden certainly seems more aware of the threat posed by China than candidate Biden, and that is a welcome change,” said

(R., Fla.). “The question is whether rhetoric will translate into proactive policy that defends America’s interests or reactionary responses that get watered down through an interagency process.”

Mr. Rubio, who ran for president in 2016, has introduced legislation that would require Chinese government-supported organizations to register under the Foreign Agents Registration Act.

(R., Ark.), another Republican seen as likely to mount a presidential bid, is pushing a bill to limit visas given to Chinese nationals.

has endorsed legislation in his state to require universities to report gifts of $50,000 from foreign sources. 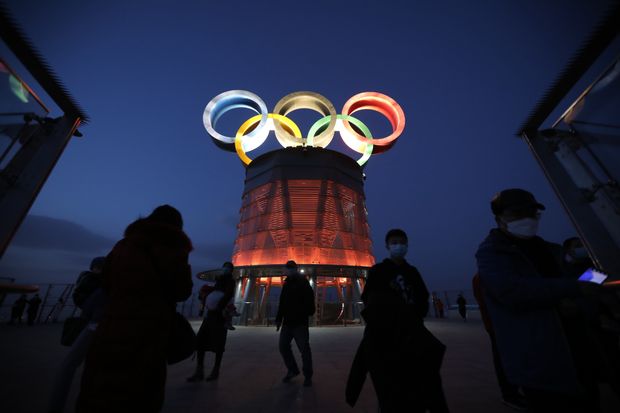 Some Republicans want President Biden to boycott the 2022 Winter Olympics in Beijing.

(R., Fla.) has called for a boycott of the Beijing Olympics and criticized Mr. Biden for, among other things, rolling back a plan for the sale of TikTok’s American operations sought by Mr. Trump. “It is no secret that Communist China’s plan is world domination,” Mr. Scott said in a recent news release.

The White House says an array of China-related policies are under review.

Republicans also have criticized Mr. Biden’s decision to re-enter the World Health Organization after Mr. Trump pulled the U.S. out of it, saying China’s sway and lack of transparency hurt the Covid-19 response. “Biden puts China’s interests first…AGAIN!” read an email from the Republican National Committee, which has incorporated China policy into fundraising appeals.

Democrats dismiss the contention that they aren’t worried about China. “China is the epicenter of our attention,” said Senate Foreign Relations Committee Chairman

How do you envision U.S. policy toward China changing under the new administration? Join the conversation below.

said some of the Trump administration’s rhetoric about getting tough on China was overblown. He pointed to the trade pact Mr. Trump reached, which he said failed to secure structural changes to Chinese business practices, including intellectual property theft.

“There is significant consensus now between Democrats and Republicans that China under its current leadership has become more ambitious, more aggressive, and that China’s strategic intentions are more threatening to the interests of the U.S. and its allies,” Mr. Haenle said.

One common focus for both Democrats and Republicans has been Chinese treatment of the Uyghur ethnic group. Both the Trump and Biden administrations have deemed it genocide.

During the 2020 campaign, Mr. Biden seemed to dismiss any risk in China’s growing prominence. “They’re not bad folks, folks. But guess what? They’re not competition for us,” he said on the campaign trail in Iowa.

He has since begun using stronger rhetoric—and sought to use rising criticism of China to his advantage. A day after holding his first phone call with Chinese President

Mr. Biden made a pitch for his infrastructure plans by noting how China was making major investments in rail and electric vehicle technology.

“If we don’t get moving,” Mr. Biden said last month, “they’re going to eat our lunch.”

President-elect Joe Biden has sent signals that the U.S. will remain tough on China, from trade to technology. WSJ’s Jonathan Cheng explains the new administration’s policy approach and how China might respond. Photo: Lintao Zhang/AP

—Lindsay Wise and William Mauldin contributed to this article.

Write to Alex Leary at alex.leary@wsj.com