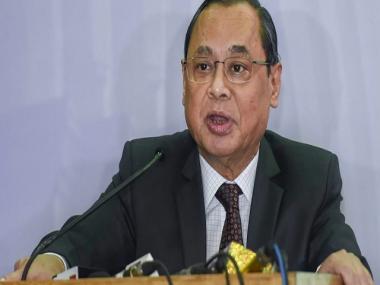 New Delhi: The Supreme Court Thursday closed the proceedings initiated to probe a larger conspiracy behind sexual harassment allegations against ex-CJI Ranjan Gogoi and “fixing” of benches at the top court. A bench headed by Justice Sanjay Kishan Kaul said that nearly two years have passed and the possibility of retrieving electronic records is very little.

The top court, while closing the suo motu proceedings in the case, said the in-house probe has been completed and the three-member panel headed by Justice SA Bobde, the current CJI, has already given the report exonerating the former CJI.

The bench, also comprising justices AS Bopanna and V Ramasubramanian, said the Justice (retd) AK Patnaik panel was not able to get electronic records like WhatsApp messages to probe the conspiracy and hence no purpose would be served by continuing with the suo motu case.

The top court referred to the letter of the Director of Intelligence Bureau that some conspiracy might have ensued due to certain tough decisions taken by former Chief Justice Gogoi like verdict on preparation of the National Register for Citizens (NRC) in Assam. There are strong reasons to believe that some kind of conspiracy might have been undertaken against the then CJI Gogoi, the bench said, while quoting the report of Justice Patnaik.

It said that in view of the mandate of the order dated 25 April, 2019 Justice Patnaik’s report opines that it cannot really inquire whether the decisions of the then CJI on the judicial side had triggered the conspiracy against Gogoi. We are of the view that the suo motu proceedings in the present case is accordingly closed and the report be sealed again, it said, adding that the veracity of the allegations levelled by lawyer Utsav Singh Bains could not be verified completely due to the limited access of records and other collaborative material.

The top court, while referring to the report of Justice Patnaik, further said that simultaneously the report on the existence of conspiracy cannot be completely ruled out.

On 25 April, 2019, the top court had appointed former apex court judge Justice Patnaik to hold an inquiry into the sensational allegations of a lawyer about “larger conspiracy” to frame Gogoi and fixing of benches in the top court.

The apex court made it clear that inquiry by Justice Patnaik shall not be with respect to the “alleged misbehavior” involving the CJI, against whom allegations of sexual allegations have been levelled by a former top court employee. It had said that the outcome of inquiry by Justice Patnaik “shall not affect the in-house procedure/inquiry which is pending on the administrative side.”

The top court had asked the Directors of Central Bureau of Investigation (CBI) and Intelligence Bureau (IB) and Delhi Police Commissioner to “co-operate” with Justice (retd) Patnaik as and when required by him during the inquiry. It had directed the Secretary General of the apex court to “forthwith” hand over the photocopies of affidavits and documents filed by Bains in a sealed cover to Justice (retd) Patnaik along with the order.

Bains had filed an affidavit following the unprecedented hearing in the court during which Justice Gogoi had said some “bigger force” was behind the sexual harassment allegations as they wanted to “deactivate” the CJI’s office. The hearing on 20 April in the case, titled as a matter of “great public importance touching upon the independence of judiciary”, was held after stories were published on some news portals about sexual harassment allegations levelled by a former employee of the apex court against the CJI.