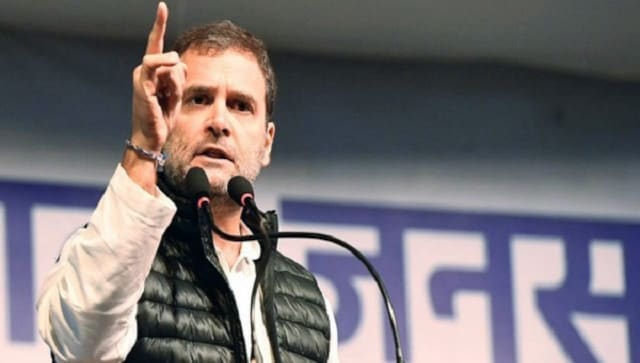 Raipur: Congress leader Rahul Gandhi on Sunday said the three new farm laws enacted by the Centre will “weaken” the foundation of the nation, and asked Prime Minister Narendra Modi to reconsider the laws in the interest of farmers.

Virtually addressing the Chhattisgarh statehood day celebrations, Gandhi hailed a scheme launched by the state government to set up English medium schools in all districts, saying the language provides a global opportunity to youth.

The function to celebrate the statehood of Chhattisgarh, which came into existence on 1 November, 2000 after being carved out of Madhya Pradesh, was held at Chief Minister Bhupesh Baghel’s official residence.

Gandhi said the country has been witnessing a tough phase due to COVID-19 outbreak. In such a situation, the weakest sections like farmers, labourers, small businessmen, mothers, sisters and youth are the worst-affected.

“The condition of farmers in the country is known to everyone. We read news of farmer suicides every day. In a way, it is happening on such a scale that the country has accepted it,” he said.

“But we should not accept it. We should protect farmers, labourers and small businessmen and stand with them,” the former Congress president said.

“If we weaken the foundation — the farmers and the labourers — then the entire structure will weaken. When we protect farmers and labourers, we are not only protecting them but also safeguarding our nation and its future,” Gandhi said.

“Similarly, youth and children are the foundation of our future. If we do not give opportunity to them, then we will be weakening the future of the nation,” he added.

Referring to the farm laws enacted by the central government, Gandhi said, “I am pained that farmers in the country are being attacked.”

He noted that recently during an election rally in Bihar, he said mandi (farm produce markets) and minimum support price (MSP) hold a great significance and these ensure protection to the interests of farmers and labourers.

“I accept that there can be lacunae in mandi, MSP and procurement systems, but if we destroy the entire system, like it was done in Bihar in 2006, then the countrys foundation will be destroyed. Therefore, we have been fighting against the three new central farm laws, he said.

Gandhi also said he had asked the prime minister to reconsider these laws and strengthen the mandi system.

“If there are less number of Mandis, then increase it, and if there are flaws in the MSP, then rectify it, but dont destroy the entire system. I am confident that the PM will reconsider the three laws in view of the sentiments of farmers as these laws will weaken the country’s foundation,” Gandhi said.

On the occasion, Baghel released the third installment of cash benefit under the Rajiv Gandhi Kisan Nyay Yojna to 18.38 lakh farmers in the state. Baghel also launched the Swami Atmanand Government English Medium School scheme, aimed at providing education in the English language to students across the state.

“The poor people should get this opportunity. We believe the sons of farmers and labourers should getbig opportunities,” he said.

Lauding the initiatives taken up by the Baghel government, he said, “Chhattisgarh has set an example for the entire nation in terms of welfare initiatives for farmers, labourers and youths. The state government has been working with a new vision.”