QATAR World Cup fans have been left baffled by “rip off” burger on sale at the stadiums which they compared to a £1 Rustlers.

The expensive costs of food and drink has caused a stir as more than a million fans descended on the tiny nation in the Middle East.

How much would you pay for this burger at the footie? 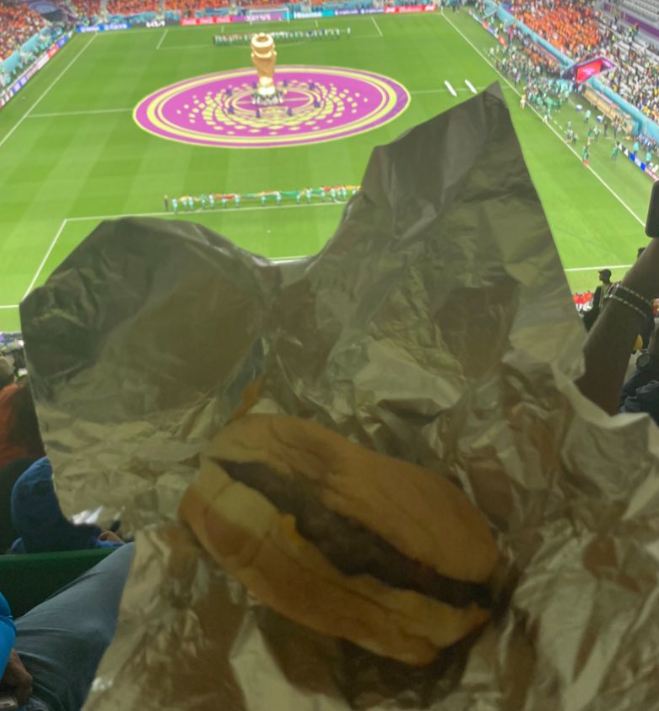 ow much would you pay for this sorry looking burger at the footie?

Packed-lunch style breakfast boxes at £175-a-night fan camps, £15 bottles of Becks, and sad-looking salads on sale at the World Cup fan zones have all been widely shared and mocked.

And it has raised questions about whether fans really are getting value for money as they travelled to Qatar – which is one of the richest countries in the world per capita.

The latest snap widely shared online is of a miserable looking beef burger which was reportedly served at the Al Thumana Stadium during the 2-0 win for the Netherlands over Senegal.

The snap shows a small and rather flat looking beef burger – which fans compared to a simple microwavable burger from Brit snack favourite Rustlers.

And while it may a delicious snack for £1 – fans agreed that it certainly wasn’t worth the stonking £8 this fan paid for it during the game.

“Is it me or is that a Rustlers?,” wrote one fan, as others replied “No mate it’s worse” and “this makes Rustlers look like prime quality food”.

Others fans joked “Ronald McDonald wouldn’t touch that” and “£8 for a McSingle?”

“Did someone trample on that before you opened it?!,” one said, and another replied “sad looking burger that”.

One added in all capital letters: “EIGHT POUNDS FOR A RUSTLERS?” and one joked: “Robbery beyond daylight.”

And another said “wow, looks absolutely disgusting…. Hope it tastes better than it looks” while one added “Footy Scam more like”.

“The wrapper looks the best bit,” another wrote, and one said “looks like the pack lunch me ma made me when I was 7”.

Other fans however were less damning as they said they had paid more for less at stadiums and festivals in the UK.

Qatar has already faced questions over organisation of the World Cup – with reports weeks before the start that the nation simply was not ready.

Confusion over the sale of beer, infrastructure problems and reports of crowd trouble at the fanzone have already surfaced.

The tiny country is expected to welcome more than one million fans during the tournament – when the country only has a population of 2.9million.

Billions have been spent to try and ready the nation for its first attempt at holding an event of this scale.

And in an embarrassing u-turn last night, Qatar authorities revealed they were offering refunds to fans facing problems at the cabin villages.

Football fans complained of leaky toilets, six hours queues to check in, and heavy handed policing at the two of the pop-up sites in Qatar.