ALMATY, Kazakhstan—At the start of the year, Russia dispatched more than 2,000 troops to its longtime ally Kazakhstan to help put down violent antigovernment unrest. Six weeks later, when Russian troops stormed into Ukraine, Kazakhstan had an opportunity to repay the favor by supporting the invasion.

Instead, Kazakhstan has joined other Central Asian countries along Russia’s southern frontier in staying neutral on the invasion, leaving Belarus as the only ex-Soviet state that has offered full-throated support. Kazakhstan has promised to enforce Western sanctions against Moscow, said it would boost oil exports to Europe via routes that bypass Russia, upped its defense budget and hosted a U.S. delegation meant to coax the Central Asian country closer to Washington’s orbit.

For decades since the fall of the Soviet Union, Moscow has worked to maintain influence across Central Asia through military and economic alliances with its former sister republics. Chief among them is Kazakhstan, an oil-rich country larger than the size of Western Europe. The two countries share a 4,750-mile border, the world’s second longest frontier after the U.S.-Canada border.

Peacekeepers returning to Russia from Kazakhstan in January.


Russia’s invasion of Ukraine—a fellow former Soviet republic that shares a lot of similarities with Kazakhstan—is changing that relationship. Now Kazakhstan is rethinking Russia’s privileged position in its foreign policy and reaching out to countries like the U.S., Turkey and China, according to interviews with current and former Kazakh officials, lawmakers and analysts.

A telling moment came in June, when Kazakh President

flew to Russia for Mr. Putin’s flagship economic forum in St. Petersburg. Sharing the stage with the Russian president, Mr. Tokayev said Kazakhstan wouldn’t recognize the two Moscow-backed separatist states in the Donbas region of eastern Ukraine that Mr. Putin says he is liberating. When asked by the panel’s moderator whether the West was pressuring his country, Mr. Tokayev deflected the question.

During his visit, Mr. Tokayev told Russian state television that his country wouldn’t help Russia violate sanctions, but stressed that Russia would remain a key ally. “Kazakhstan is in no way renouncing its allied obligations,” he said. 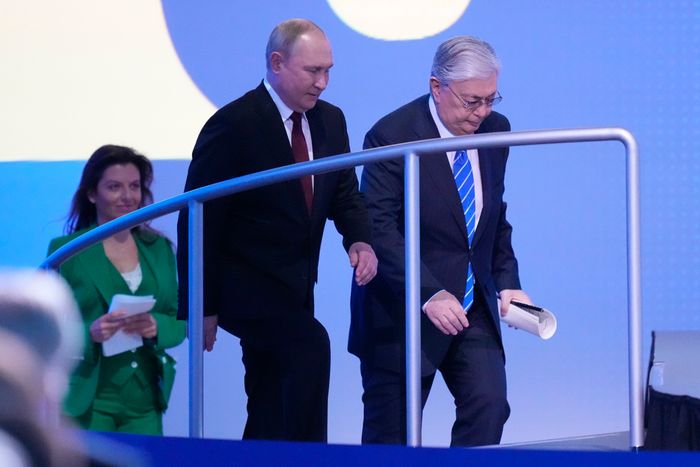 It’s a delicate balance. Kazakhstan has banned antiwar demonstrations that might anger Moscow, but also outlawed publicly displaying the Z sign that has become a pro-war symbol in Russia.

Sayasat Nurbek, a Kazakh lawmaker, invoked a Siberian fairy tale about how chipmunks got their stripes to explain Kazakhstan’s reasoning. A bear and a chipmunk were friends, the story goes, and the bear in a good mood petted the chipmunk’s back, but scraped it with his claws.

“The moral of this tale is: if you are a friend of the bear—even if you are the best friend, even if he is in a good mood—always watch your back,” Mr. Nurbek said.

One of Kazakhstan’s first signals it wouldn’t be marching in step with Russia came soon after the war began when it abstained from a United Nations vote in early March on a resolution demanding that Russia end the invasion, instead of voting against it. Days later, it dispatched a Boeing 767 carrying 28 tons of medicine to Ukraine, one of several aid flights it has sent. 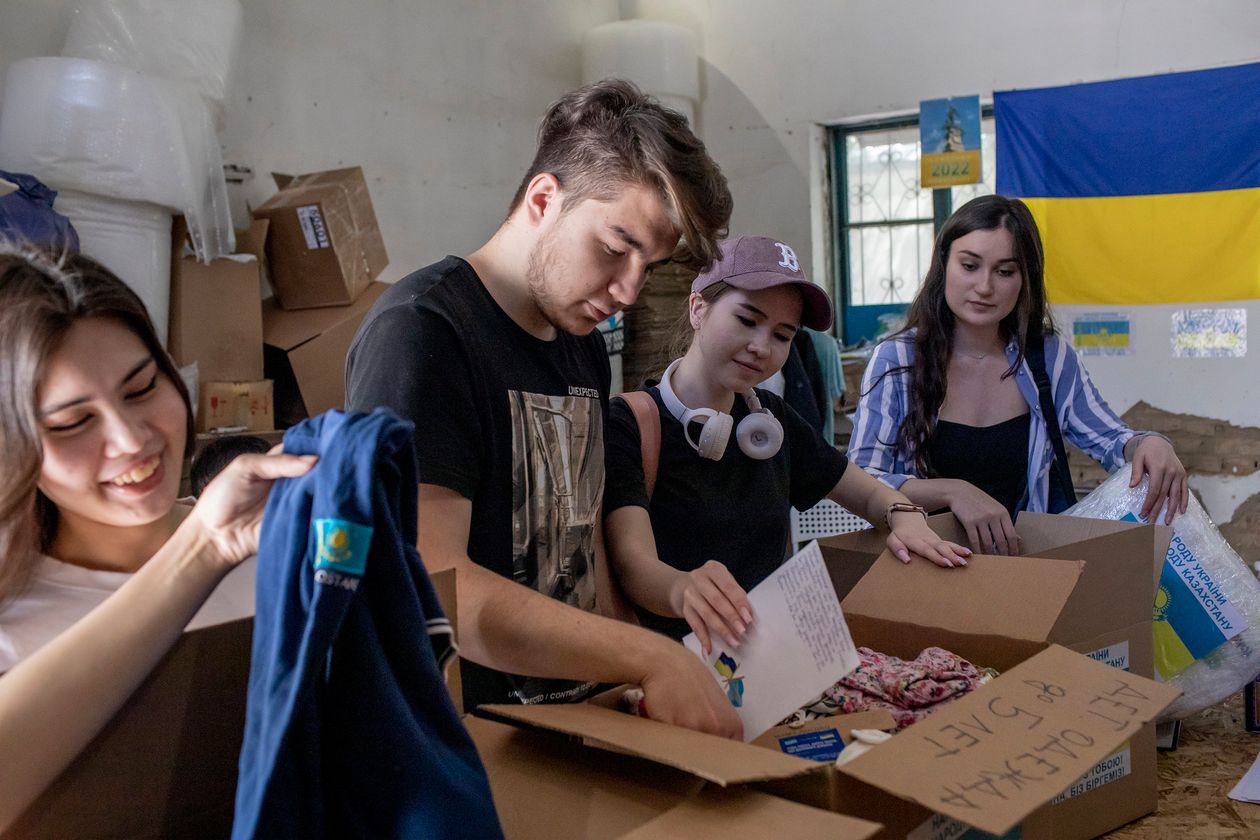 Students packed aid boxes to be sent to Ukraine in Almaty, Kazakhstan, May 9.

In early July, Kazakhstan’s Finance Ministry published a draft order that would follow Western sanctions restrictions on some exports to Russia.

Kazakhstan’s stance has angered some in Russia, particularly after the country’s troops helped put down what began as peaceful protests in January over a rise in gas prices, before turning into what many Kazakhs saw as a battle among elites for power.

“Kazakhs, what kind of ingratitude do you call this?” Tigran Keosayan, a host of a Russian state television show, said in late April. “Look carefully at what’s happening in Ukraine….If you think that you can get away with trying to be so cunning, and imagine that nothing will happen to you, you are mistaken.”

Kazakhs have been long used to that kind of rhetoric. Roughly 20% of the population are ethnic Russians, and Russian nationalists have long claimed that Kazakhstan’s north is Russian land. In 2014, after Russia severed Crimea from Ukraine, Mr. Putin said Kazakhstan had no history of statehood until the Soviet Union fell apart.

After the invasion, the rhetoric is being taken seriously, particularly since Kazakhstan is the only Central Asian nation that borders Russia. Kyrgyzstan, Tajikistan, Turkmenistan and Uzbekistan all lie to the south of Kazakhstan. None have supported the invasion, and Uzbekistan has publicly said it would not recognize the breakaway Donbas republics.

The partial estrangement has given the U.S. a window to try to regain influence in a region it had stepped back from in recent years.

U.S. officials have visited the region several times starting in April, when President Biden’s top diplomat for human rights, Uzra Zeya, traveled to the country. In late May, Donald Lu, Assistant Secretary of State, took a trip to Kazakhstan, Kyrgyzstan, Tajikistan and Uzbekistan. And in June, the newly appointed head of the U.S. Central Command, Army Gen. Erik Kurilla, toured the same countries.

The U.S. outreach to Kazakhstan raised eyebrows in Moscow, said Andrei Grozin, a Central Asia researcher at the state-funded Russian Academy of Sciences. While the Kremlin isn’t troubled yet, he said, if Kazakhstan’s government were to turn hostile, that would be even more threatening to Russia than a hostile Ukraine, given the countries’ lengthy shared border.

“But I think it won’t come to this,” Mr. Grozin said. “Kazakhstan’s elite has a greater instinct for self-preservation than their colleagues in Ukraine.”

The U.S. has asked Central Asian governments to side with the West on supporting Ukraine but is careful not to exert undue pressure, two State Department officials said. 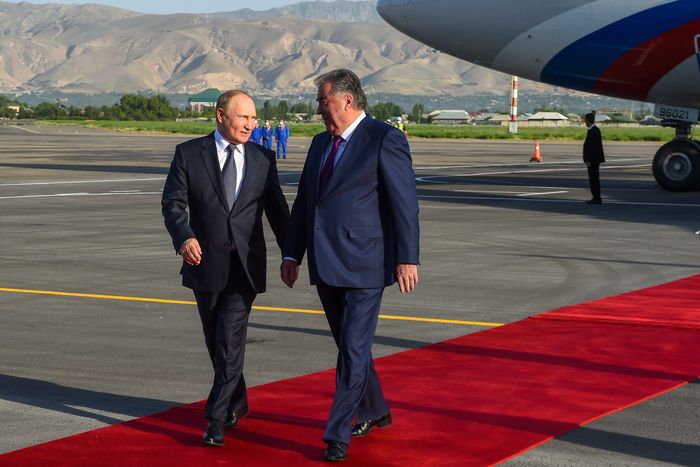 On June 28, a week after Army Gen. Kurrila’s visit to Tajikistan, Mr. Putin chose the country for his first visit abroad since invading Ukraine. “I am very glad to be on the friendly soil of our ally,” Mr. Putin told his Tajik counterpart

After her visit to Kazakhstan in April, Mr. Biden’s human rights envoy went to neighboring Kyrgyzstan. At a joint news conference with the country’s then-foreign minister,

the two announced Kyrgyzstan and the U.S. would soon sign a bilateral cooperation agreement allowing the country to receive U.S. aid in areas like the economy and education.

Mr. Kazakbayev submitted his resignation eight days later because of health reasons, his replacement told local media. A person familiar with the decision said he resigned at Moscow’s request.

Cultural, economic and historical ties with Russia run deep among Central Asian countries. Moscow has military bases in Kyrgyzstan and Tajikistan, and an anti-ballistic missile testing site in Kazakhstan.

In early May, around 10,000 people marched in Almaty, Kazakhstan’s largest city, to commemorate the defeat of Nazi Germany. They waved Soviet flags, carried a portrait of Soviet dictator 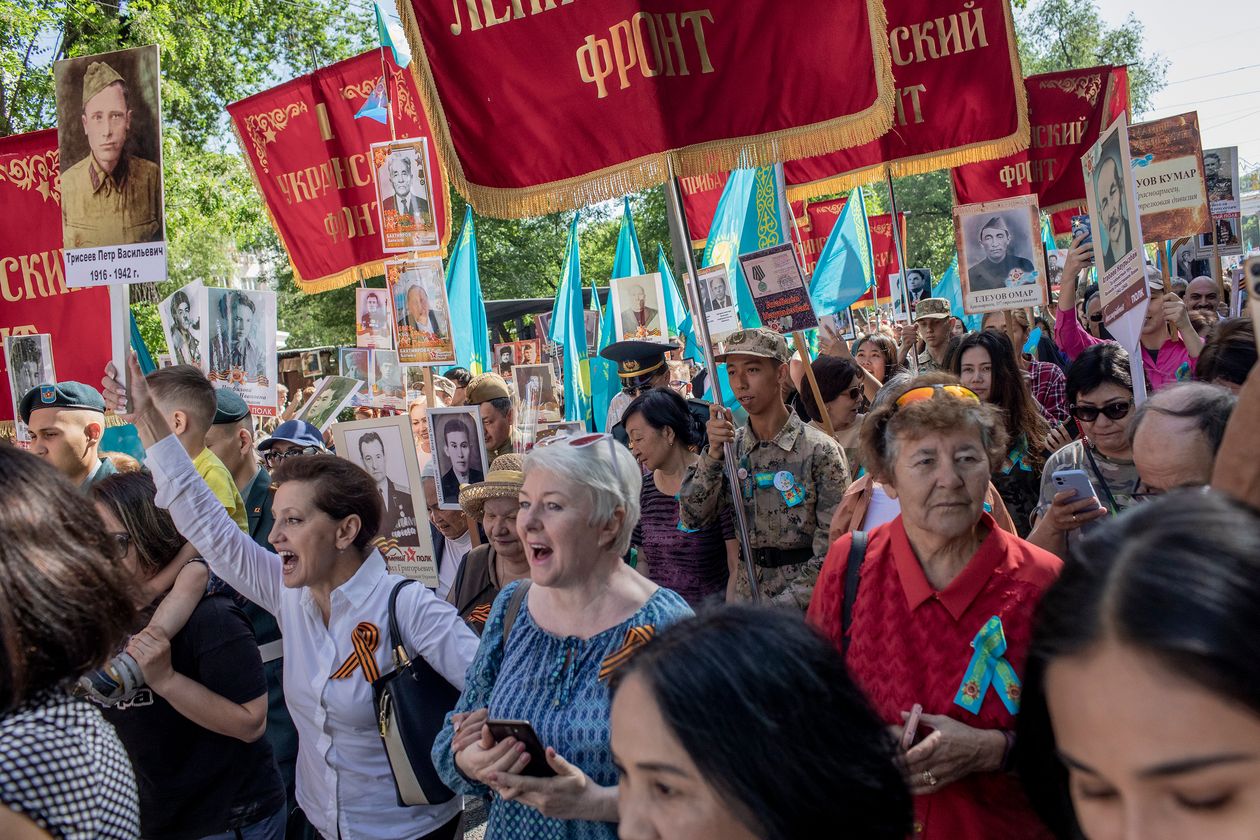 People marched for Victory Day in Almaty on May 9. 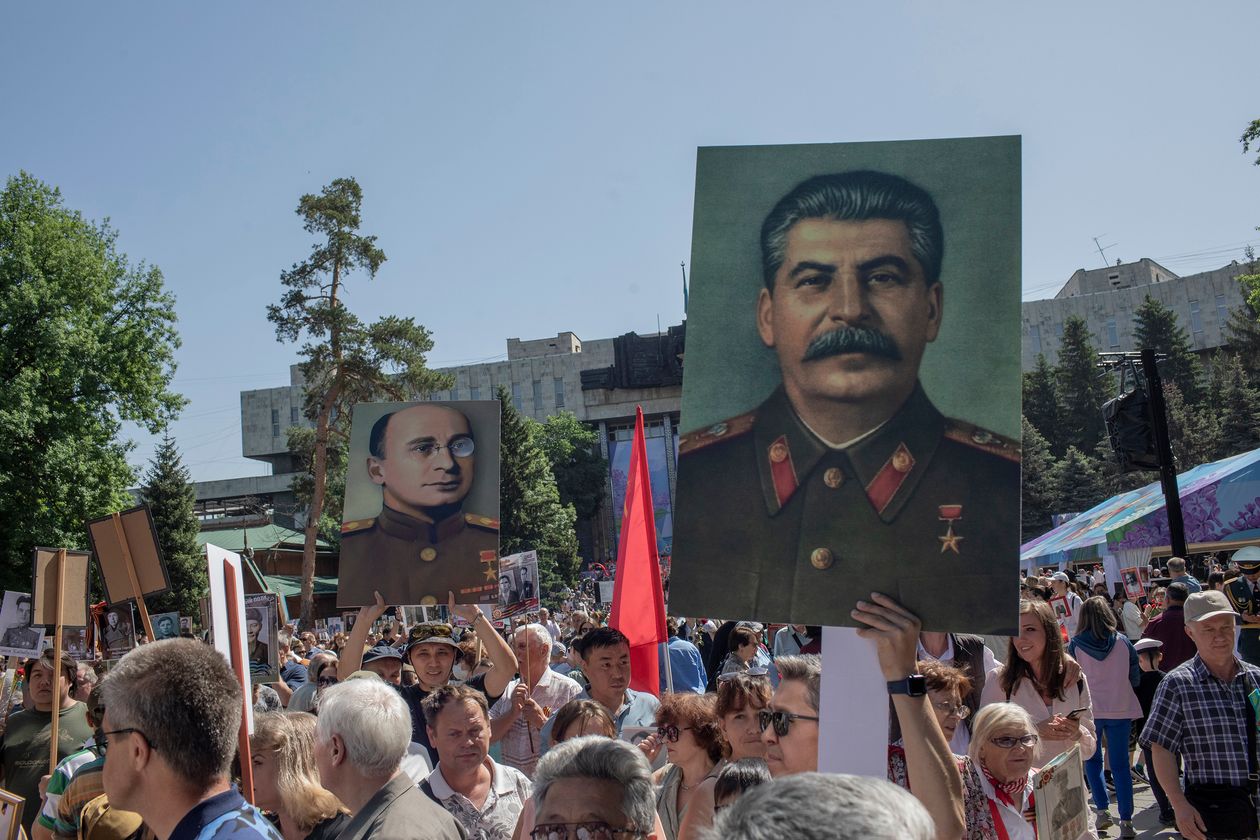 Marchers held posters of Joseph Stalin and Lavrentiy Beria, who had been director of the Soviet secret police.

Russia is the region’s top trading partner and provides work for millions of Central Asian laborers. Remittances are worth nearly a third of GDP in Kyrgyzstan, over a quarter in Tajikistan, and about 10% in Uzbekistan. The lion’s share comes from Russia.

After the West imposed sanctions, Kazakhstan’s traditional trade route with Europe through Russia slowed to a near halt, with insurers and importers wary of cargo passing through the country. That prompted Kazakh officials to seek to diversify its trade. (The World Bank predicts Central Asian economies will contract an average of 4.1% this year.)

Weeks after the invasion, a delegation of Kazakh officials traveled to Azerbaijan and Georgia, fellow ex-Soviet states on the Caspian Sea and bordering Turkey, for talks on reviving the so-called Middle Corridor—a trade route that runs from China to Europe through Central Asia, the Caucasus region and Turkey.

In the past, the trade route wasn’t seriously explored by either Central Asian nations or China and Turkey in part because the governments didn’t want to anger Russia, said Selcuk Colakoglu, director of the Turkish Center for Asia Pacific Studies and a former adviser to the Turkish Foreign Ministry who now teaches at a university in China.

The invasion emboldened countries in the region, including China and Turkey, to challenge Russia’s dominance, he said.

Kazakhstan’s ports of Aktau and Kuryk on the Caspian Sea are now humming with activity. Container shipments were up threefold from January to April compared with the same period last year, said Zeynolla Akhmetzhanov, deputy director of the Kazakhstan’s Industry Ministry’s department for transport policy and infrastructure.

Diversifying trade is an existential question for Kazakhstan. Russia has twice in the past few months shut down the Caspian Pipeline, which carries roughly 80% of Kazakhstan’s oil exports through Russia to the Black Sea port city of Novorossiysk. In late March, Russia shut down two of the terminal’s three moorings for repairs for weeks after a storm damaged the terminal. It reopened them days after Kazakhstan’s energy minister and a delegation traveled to Moscow for talks in April.

In early July, a Russian court ordered the pipeline to suspend its activity for 30 days over alleged environmental violations. The court reversed its decision several days later, but the move had already sent tremors through Kazakhstan. On July 7, President Tokayev instructed his country’s oil companies to develop new shipping routes.

For years, Moscow and Beijing had a tacit division of labor, with Russia providing the security oversight and China developing the area’s economies. That’s now changing.

visited Kazakhstan and met with Mr. Tokayev. According to China’s Ministry of National Defense, the two agreed to strengthen military cooperation. Kazakhstan is also pushing for closer relations with regional power and North Atlantic Treaty Organization member Turkey. In early May, Mr. Tokayev flew to Ankara, where Turkish and Kazakh officials signed a deal to jointly produce military drones in Kazakhstan.

Kazakhstan also has increased its own defense budget by 441 billion tenge, or about $918 million.

Part of the money would go to increasing Kazakhstan’s military reserves, a senior official said. Kazakhstan has also learned lessons from Ukraine’s fierce resistance, the official added, namely that it must reform its army to be more mobile and adept at combating hybrid warfare, which employs a mix of conventional warfare and methods like cyberwar, disinformation and election meddling.

While some in the West say Russia’s military has been exposed as a paper tiger, one senior official from a Central Asian country said that fear is only growing over Russia’s ambitions. “It’s one thing when they deal with so many others and they have Eastern Europeans and Ukraine to spend their time abusing,” the official said. “Imagine if they don’t have Ukraine to abuse. Are we going to be next?” 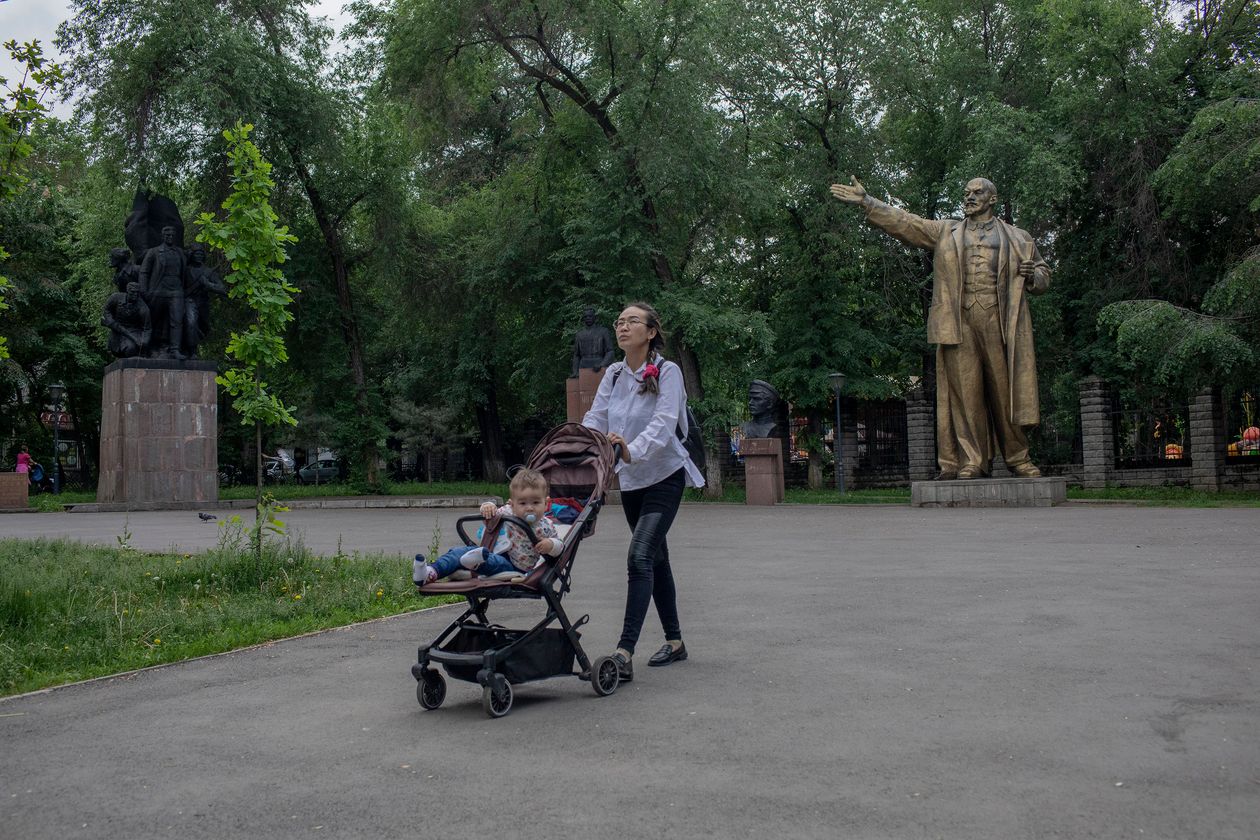 A statue of Vladimir Lenin and other Soviet-era statues line a park in Almaty.

—William Mauldin and Jared Malsin contributed to this article.

Write to Evan Gershkovich at evan.gershkovich@wsj.com