Following the recent resignations of Congress MLAs, the strength of both the ruling and Opposition camps stand at 14 in the 33-member House 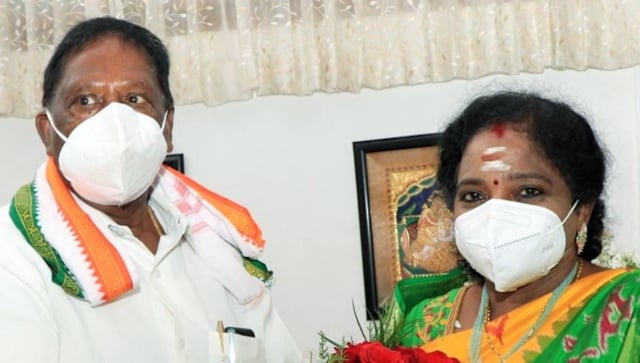 Puducherry: The Congress government in the Union Territory will have to prove its majority in the assembly on 22 February with Lt Governor Tamilisai Soundararajan on Thursday ordering the floor test, hours after assuming charge vowing to function in accordance with the Constitution.

The development came days after a ruling party MLA resigned, becoming the fourth to quit the assembly since last month, bringing down the numbers of the Congress-DMK alliance to 14 in the 33-member House with an effective strength of 28.

Soundararajan, the Telangana Governor handed additional charge of the UT on Tuesday following the removal of Kiran Bedi, issued the direction to Chief Minister V Narayanasamy after the opposition, which also has 14 MLAs, petitioned her, saying the government has been reduced to a minority and it should prove its strength on the floor of the assembly.

Narayanasamy earlier in the day attended Soundararajan’s swearing-in and also called on her later.

The present party position in the assembly: Congress (ten, including Speaker), DMK three, All-India NR Congress seven, AIADMK four, BJP three (all nominated with voting rights) and one independent who has supported the government all along. Four Congress MLAs have resigned and one member had been disqualified.

The simple majority in the assembly with the reduced strength is 15.

The opposition has been demanding the resignation of Narayansamy since Tuesday when his confidante John Kumar quit as MLA.

Narayansamy has rejected the demand, saying he enjoyed majority even as the Congress, eyeing to retain power in the assembly elections, has been jolted by the spate of resignations, including by two ministers.

Polls are likely in April and the House’s term ends on 8 June.

Soundararajan’s direction to Narayansamy for a trust vote came after the opposition, led by the Leader of the Opposition in the assembly and All India NR Congress (AINRC) chief N Rangasamy, ‘reiterated’ its stand that the government has to prove its majority on the floor of the House, a release from the Lt Governor’s Secretariat here said.

“They averred that the present government has been reduced to a minority and lost its legitimacy to continue,” the release said, adding Rangasamy, AIADMK Legislature Party Leader A Anbalagan and BJP’ state president V Saminathan, MLA, met her in this connection.

Issuing directions to Narayansamy in “exercise of the powers conferred under Art 239 of the Constitution read with the provisions of the Government of Union Territories Act, 1963, in particular section 6,” the Lt Governor said the assembly shall be summoned on 22 February.

She said the meeting shall be confined to a “single” agenda, “namely whether the government of the incumbent Chief Minister continues to enjoy the confidence of the House.”

Voting shall take place by show of hands and the entire proceedings are video graphed, the release said.

“The floor test in pursuance of the above directions shall be concluded by 5 pm on 22.02.2021 and the proceedings shall not be adjourned/delayed or suspended at any cost,” it said.

All authorities should ensure there was no breach of law and order and that the floor test was peaceful.

The Lt Governor has also directed that proper law and order arrangements shall be made during the conduct of the “trust vote,” the release said.

Earlier in the day, Chief Justice of the Madras High Court Sanjib Banerjee administered the oath of office to Soundararajan, who hails from nearby Tamil Nadu and became the fifth woman to hold the Lt Governor post here, at a simple function at the Raj Nivas, where she took the oath in Tamil.

Later, addressing reporters, she said “I know what are the powers of a Governor, powers of Lt Governor and Chief Minister, of elected members and officers.”

The Congress government was at loggerheads with Soundararajan’s predecessor Bedi and had accused her of impeding the implementation of decisions of the elected government.

On the opposition plea with the LG’s office on Wednesday seeking a direction to the CM to prove majority in the assembly in the wake of the ruling party’s depleted strength, Soundararajan said: “I am aware of this…

“…I will go through the representation thoroughly in keeping with the provisions of the Constitution, she said, adding, she would “hold the scales even.”