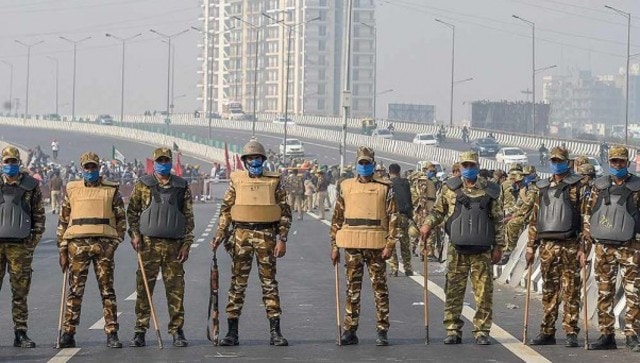 Delhi Police has stepped up security along its borders. PTI

A day after an inconclusive meeting with the Centre over their demands pertaining to the farm laws, protesting farmers called for a nationwide general strike on Tuesday.

Delhi Traffic Police has suggested alternative routes to enter and exit Delhi on 8 December as disruption of traffic is expected around the national capital. The police has advised those commuting to Delhi to use the DND instead of the Noida Link road. Chilla border on Noida link road is closed for traffic due to the farmers’ protest near Gautam Budh Dwar. “The Ghazipur border on NH 24 is closed for traffic from Ghaziabad to Delhi due to farmers’ protests. People are advised to avoid NH 24 for coming to Delhi and use Apsara/Bhopra/DND for coming to Delhi,” it tweeted.

Tikri and Jharoda borders are closed for traffic movement while Badusarai border is open only for light motor vehicles like cars and two-wheelers. The police also advised commuters to take alternative routes via Safiabad, Saboli, NH8, Bhopra, Apsara borders, and Peripheral expressway., according to The Indian Express. Singhu, Auchandi, Lampur, Piao Maniyari, Mangesh borders are closed. NH 44 is closed on both sides.

“The Chilla border on Noida link road is closed for traffic from Noida to Delhi due to farmers’ protests near Gautam Budh Dwar. People are advised to avoid Noida link road for coming to Delhi and use DND,” the police tweeted.

Delhi Taxi Tourist Transporters Association President Sanjay Samrat said in a statement that several unions, including Delhi State Taxi Cooperative Society and Kaumi Ekta Welfare Association will join the strike. Rajender Soni, general secretary of Delhi Auto Rickshaw Sangh, and Delhi Pradesh Taxi Union, however, said that many “important” auto, taxi and last mile vehicle driver unions will not join the strike. “We fully sympathise with the farmers struggle and support their demand. But the drivers of autos, taxis and Gramin Sewa and other last mile vehicles are already hit hard by the COVID-19

pandemic and cannot afford to strike now,” he said.

Banking services are also expected to be affected as many unions expressed support to the strike, with the All India Bank Employees’ Association (AIBEA) in a statement said the government should come forward and resolve the demands in the interest of the nation and farmers.

Maharashtra NCP unit president Jayant Patil said in a statement that the party workers will join the Tuesday shutdown in protest against passing of the agri laws by Parliament without holding discussions.

The sixth round of talks between the agitating farmers and the Centre will be held on 9 December, even as Minister of State for Agriculture Kailash Choudhary on Sunday said the three laws passed by the government are “in favour of farmers”, and they would not be repealed, though amendments could be made to them.

The minister’s statement came after farmers’ union leader Gurnam Singh Chadoni told reporters that if the Centre did not accept their demands to repeal the laws during Saturday’s talks, they would intensify their agitation and occupy toll plazas.

With election season around the corner, long overdue civil work, citizen grievances being addressed in Chennai