Protesters gathered outside the American Embassy in London this afternoon (Picture: Getty)

More than 100 people gathered outside the United States embassy in London to protest against today’s decision to scrap the constitutional right to abortion.

The US Supreme Court ended protections for abortion that have been in place for nearly 50 years by deciding to overturn the landmark Roe v Wade ruling.

It is expected to lead to abortion bans in roughly half of US states.

Judith Orr, vice chair of campaign group Abortion Rights, which claims to have organised the demonstration, said protesters were ‘full of rage and anger’ about the decision and warned the consequences would be ‘dire’.

She said: ‘You can’t exaggerate really the impact it’s going to have. Women will die, rural women, women who can’t access care online, African American women, women of colour, poor, working class women, these are the people who are going to suffer the most from this.’

She added: ‘We stand with you. We will fight until you win your rights back and we’re full of emotion this evening for those women.

‘I find it hard to fathom, in the 21st century, that they’re doing this, that they’re pushing people to risk their lives to control their own fertility. It’s absolutely appalling and devastating this evening.’

Outside of the US Embassy in London right now. Anger, defiance, and a commitment to keep fighting and organising pic.twitter.com/VoX4g6FB5p 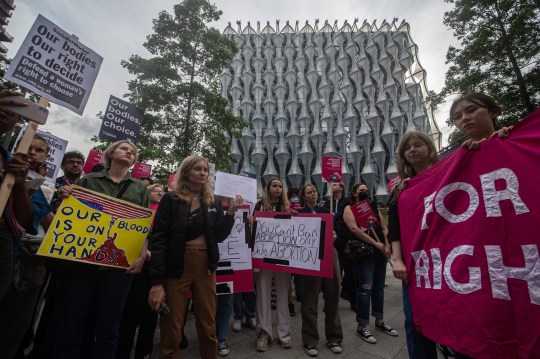 Protesters outside the US Embassy this evening (Picture: Getty) 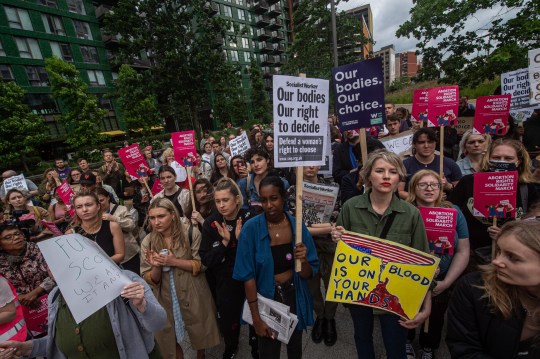 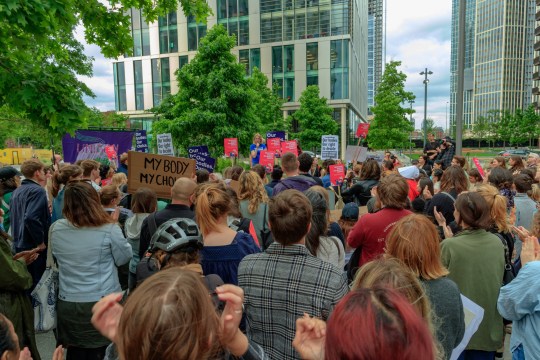 The crowd stood listening to speakers condemn the ruling of the US Supreme Court while holding signs, many reading ‘our bodies, our choice’.

Reporter Sian Bradley shared video of the protest, showing people chanting ‘Our body, our lives, our right to decide’.

She tweeted: ‘Outside of the US Embassy in London right now. Anger, defiance, and a commitment to keep fighting and organising.’

One attendee arrived wearing a costume from the Handmaid’s Tale, in which society is ruled by a fundamentalist regime that treats women as property.

In a 6-3 vote, the court ruled in favour of the state of Mississippi in the case of Dobbs v Jackson Women’s Health Organization, allowing the state to ban most abortions after 15 weeks of pregnancy, and effectively striking down the court’s 1973 ruling in Roe that legalised abortion nationwide.

It paves the way for individual states to set their own laws on whether to allow abortion, with many already set to introduce more restrictive laws.

The court is now set to examine other cases that fall under the court’s due process precedents, including those protecting access to contraception, and allowing same-sex marriage.

Wen-Wen Lindroth, UK chairwoman of Democrats Abroad, the official organisation of the Democrat party for US citizens living overseas, said it was a ‘momentous and sad day for the United States’.

Speaking at the protest, she said: ‘I’m about the same age as Roe v Wade and, you know, I think a lot of women of my generation, we just took it for granted that the struggle for women’s rights, you know, had come a very long way – maybe not all the way – but this was certainly one of the fundamental decisions that, you know, underlies our sense of equality in the US.

‘So to have it taken away is very meaningful and it will impact women, you know, of older generations, of younger generations certainly, and it’s just something that we’re going to need to address politically and find a way to turn back.’

The Women’s Equality Party joined the demo, tweeting they were ‘here and protesting’.

‘Women’s reproductive rights aren’t pawns to be used in a political game,’ they said. ‘Solidarity with our US sisters, and with women around the world who are denied their right to bodily autonomy.’

One demonstrator, Esme Trevelyan, 25, said: ‘Obviously we’re in London, there’s not lots we can do but being here outside the American embassy is just a message of solidarity, I guess, towards American women because, although it seems like it’s not a problem here, America is the most powerful country in the world, one of the most rich countries in the world, if it can happen there, surely it can happen anywhere.’

Jessica Cappi, 25, said: ‘At 4.15pm today we all got the notification on our phones and thought “this is the end of something” and we wanted to come out and fight for it and to make our voices heard I just feel so angry for women everywhere that we could regress.

‘I saw a statistic today that was the US was one of four countries that are actually going backwards on abortion rights. So I hopped on the train and 45 minutes later, here I am.’