The couple appeared relaxed and happy during their PDA (Picture: Backgrid)

Meghan Markle and Prince Harry shared a kiss as she congratulated her husband on clinching victory at a polo tournament.

The team beat rivals Klentner Ranch to win the Lisle Nixon Memorial cup by a score of 14 to 10 at Santa Barbara Polo Club in California, on Sunday.

Meghan presented the trophy to the players before kissing each teammate on both cheeks.

She then leaned in for a tender kiss with her beau, cupping his face during the embrace, before wiping lipstick off his face as spectators looked on.

Playing as ‘Harry Wales’, he scored three times during the match – which was open to the public but sold out by the time it started.

The couple last week celebrated their four-year wedding anniversary after initially meeting on a blind date set up by a mutual friend. 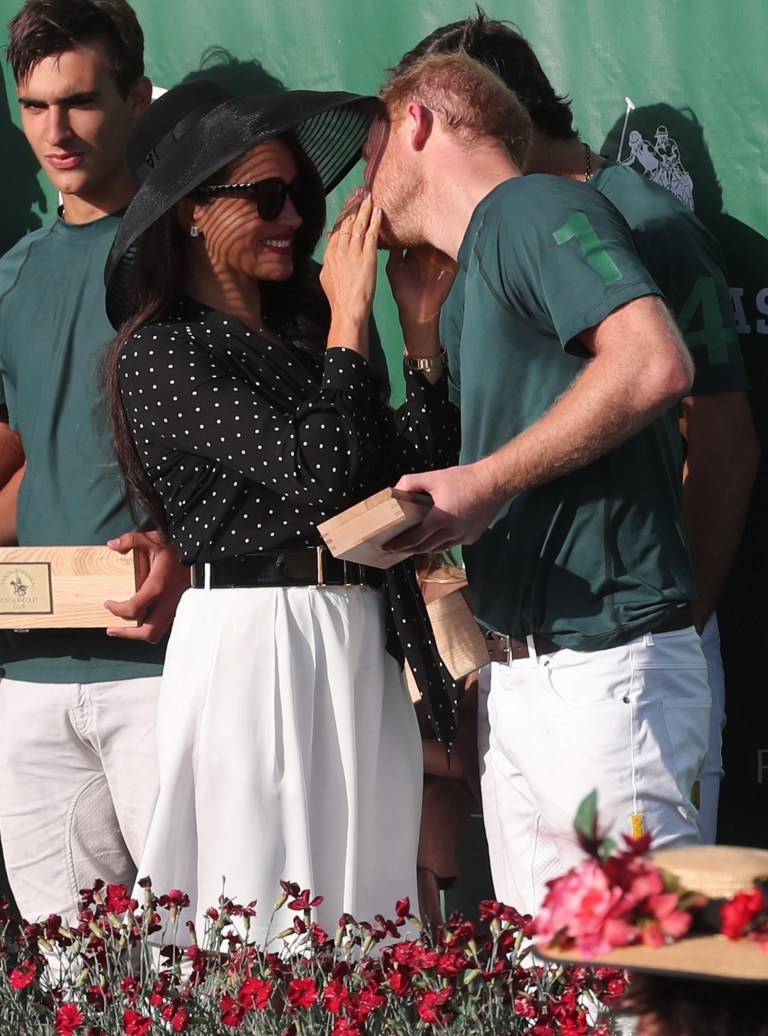 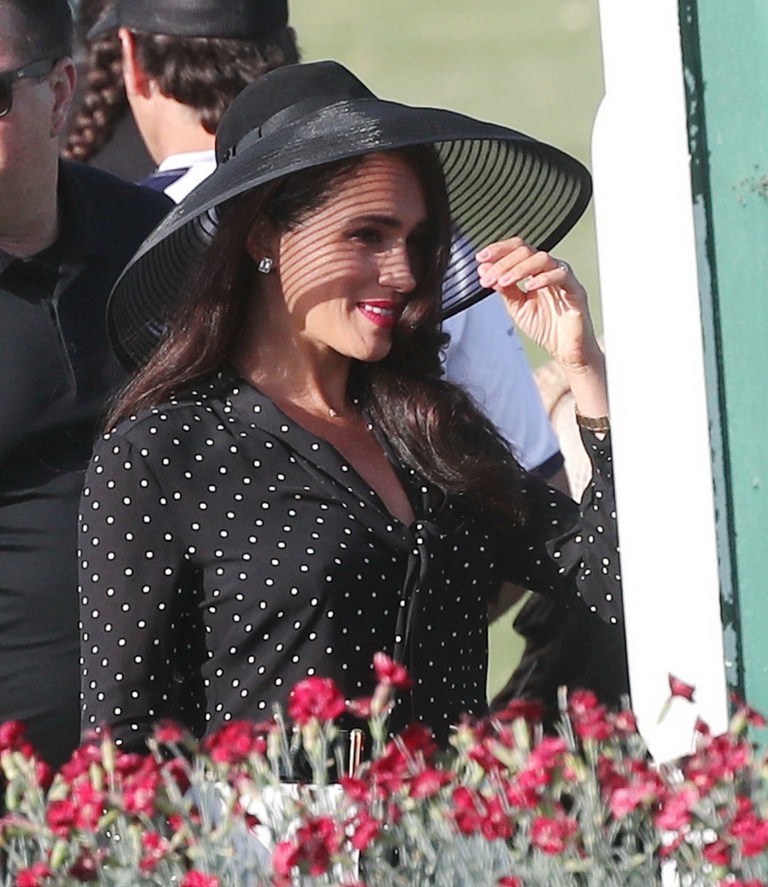 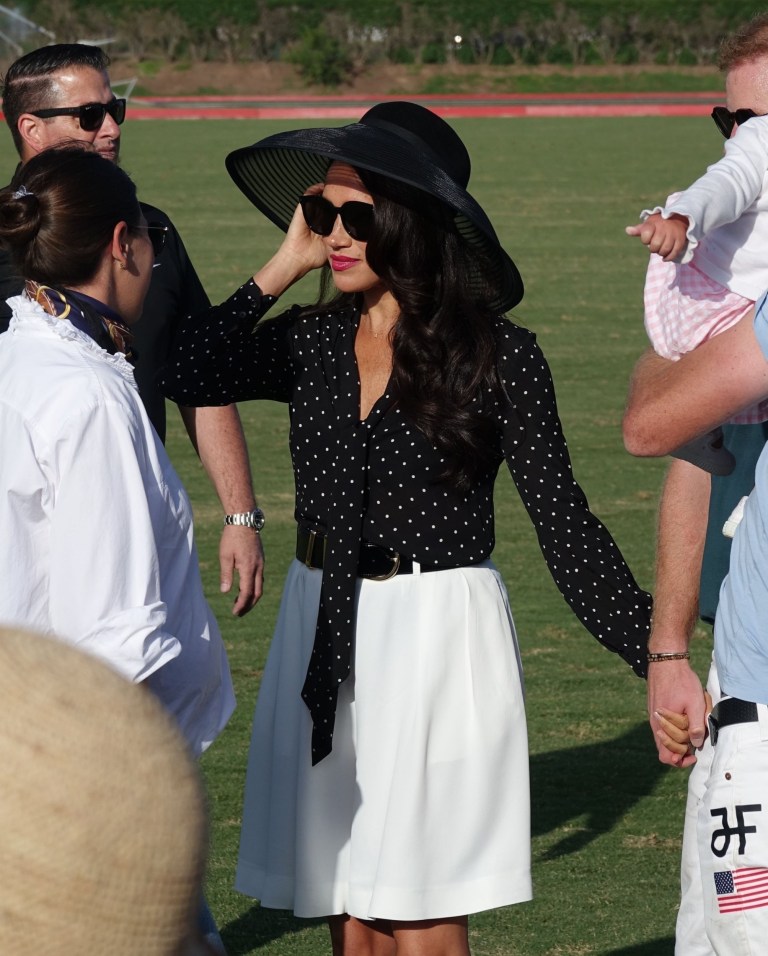 Meghan and Harry walk hand-in-hand after the game (Picture: BACKGRID)

Their sweet PDA was in marked contrast to the awkward peck Prince Charles and Diana shared following his polo victory in 1985, after four years of marriage.

Harry and Meghan – parents to Archie, three, and Lilibet, due to turn one next month – appeared relaxed and happy during the event. 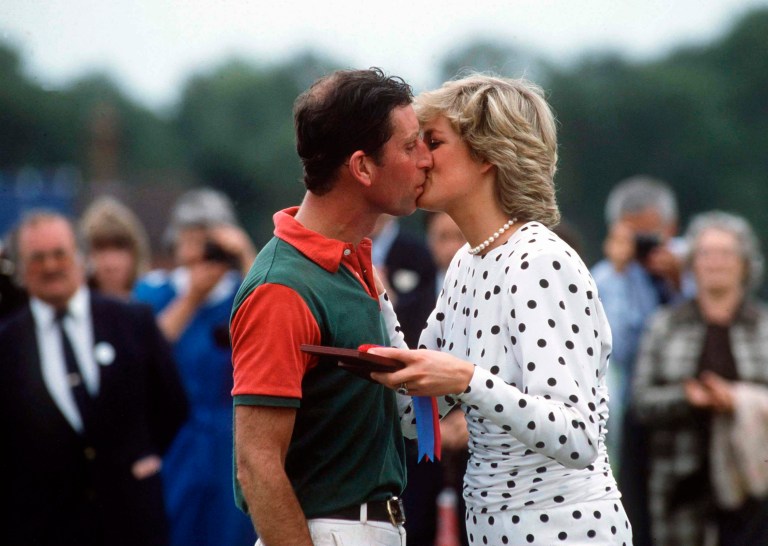 The awkward kiss between Prince Charles and Princess Diana after he won a tournament in 1985 (Picture: Getty) 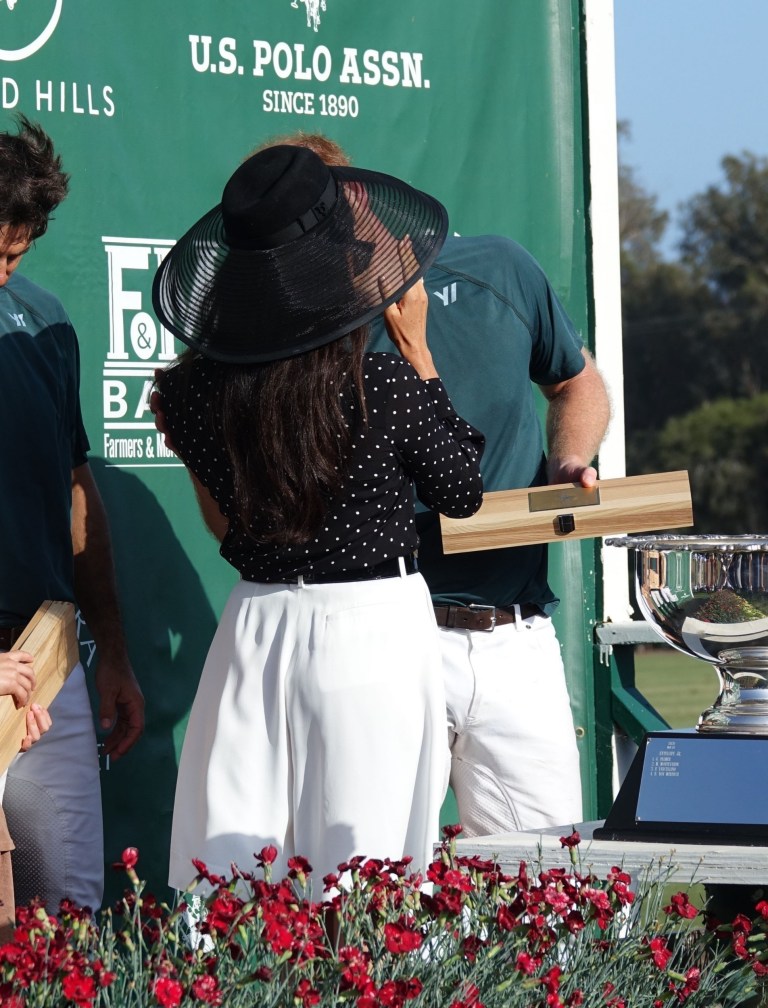 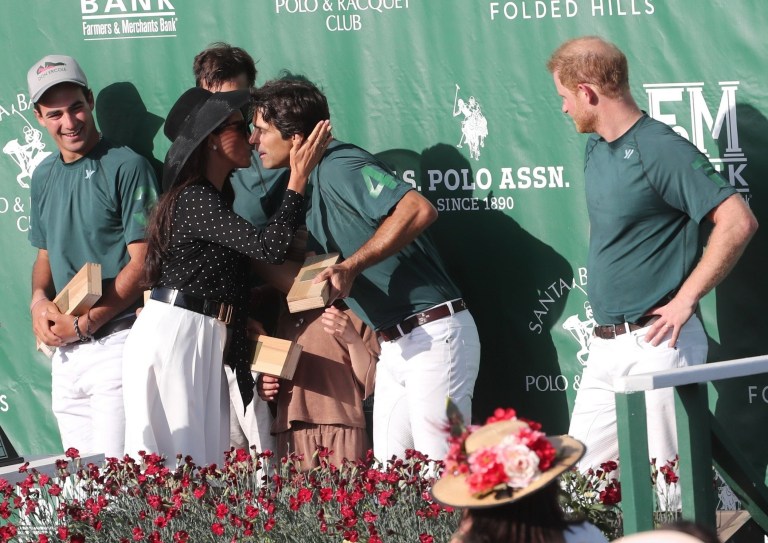 Meghan pecked each player on the cheek before leaning in for a longer kiss with her husband (Picture: BACKGRID) 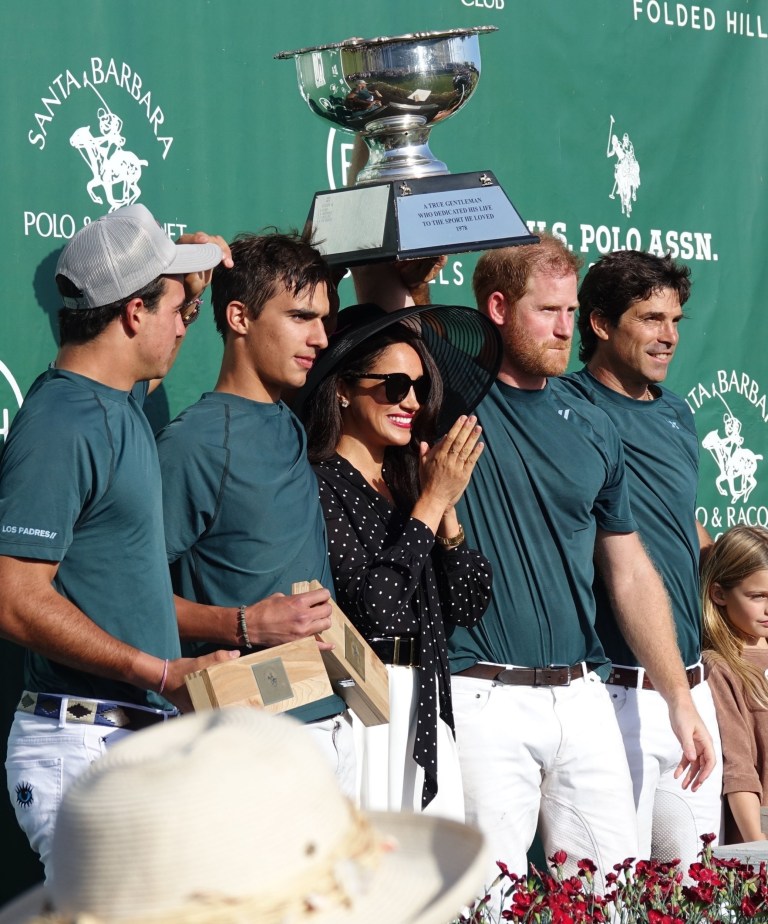 The couple pictured with team members after claiming victory on Sunday (Picture: BACKGRID)

The couple did not take their children to the polo game.

However the family are all due to travel to London for the Queen’s Platinum Jubilee celebrations. 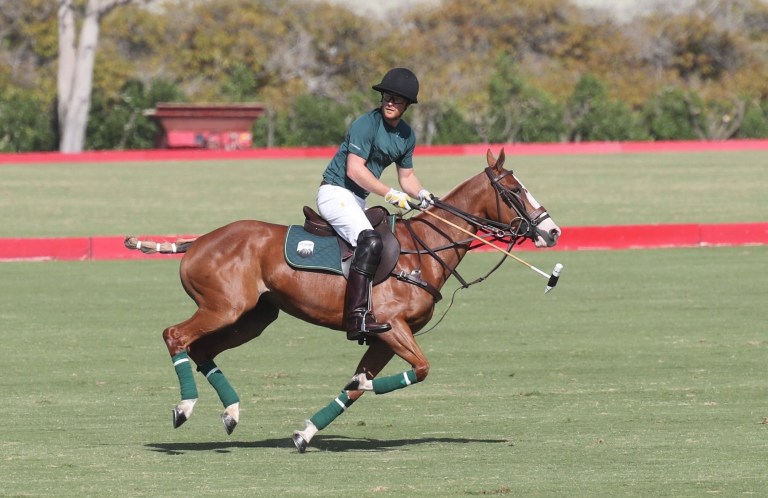 Prince Harry appeared in his element during the polo match (Picture: BACKGRID) 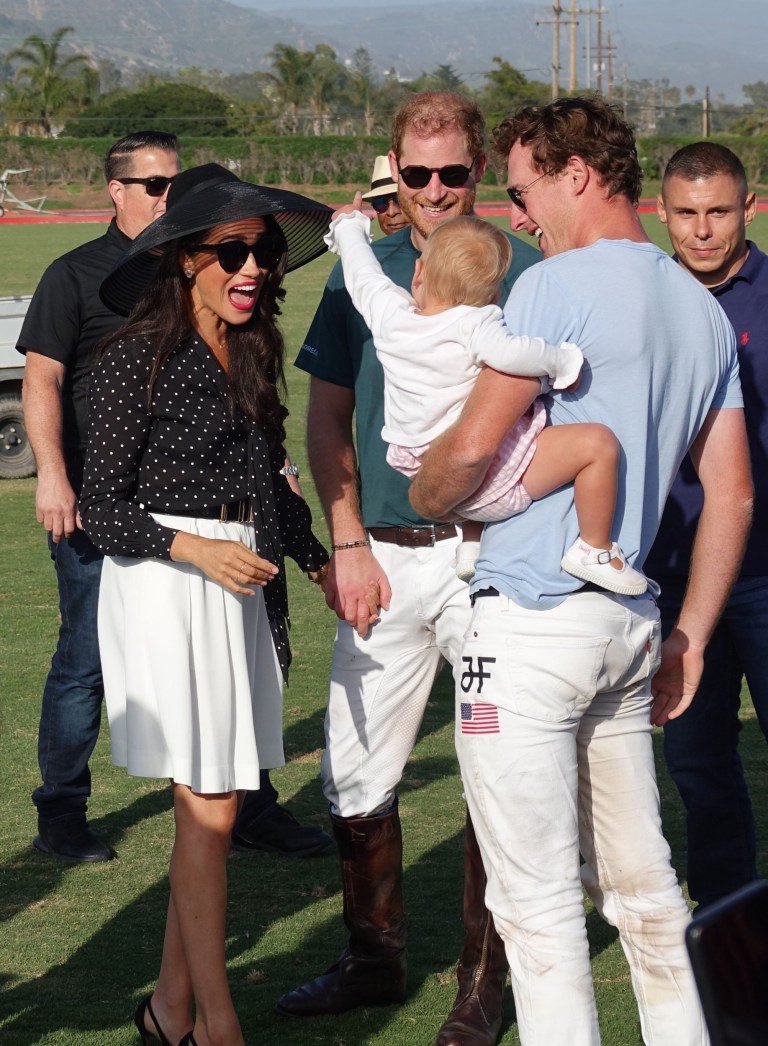 The couple seemed delighted to meet a young spectator at the event (Picture: BACKGRID) 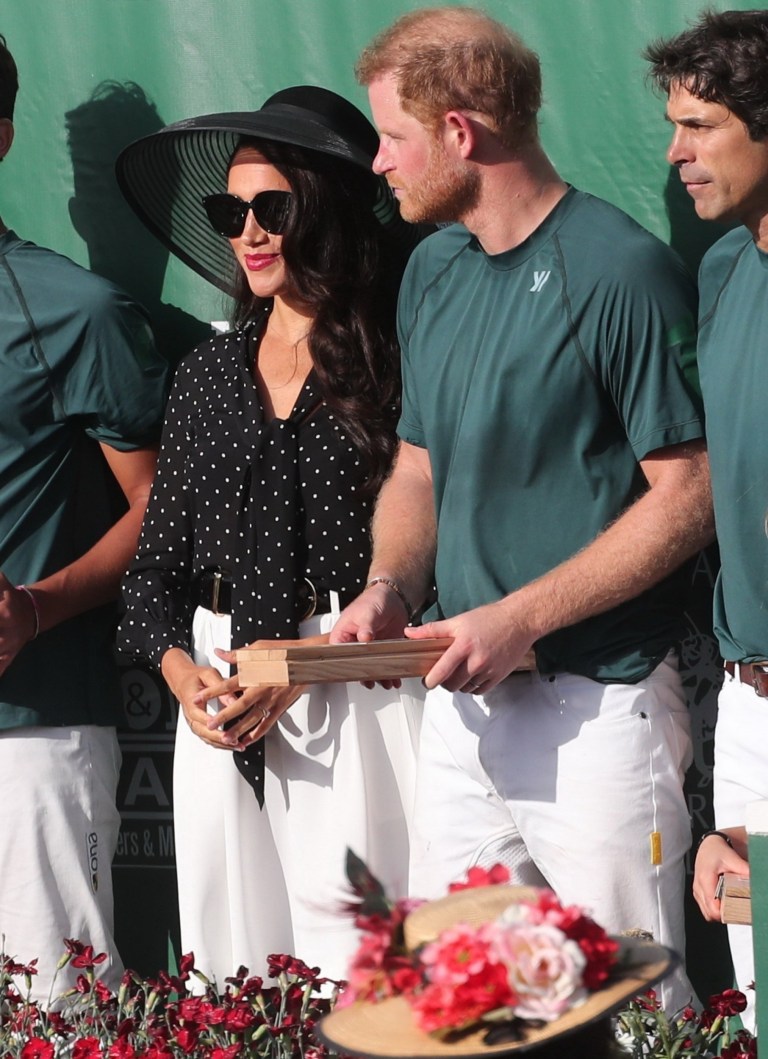 The couple are due to jet to London for the Queen’s Platinum Jubilee celebrations (Picture: BACKGRID)

It will be the first time Lilibet, named after her great grandmother, the Queen, will meet her Royal relatives.

The Sussexes confirmed they were ‘excited and honoured’ to attend the commemorations for the 96-year-old monarch’s milestone.

They made the announcement after Buckingham Palace said Harry and Meghan, together with Prince Andrew, had been axed from the line-up of royals to appear on the balcony following the Trooping the Colour. 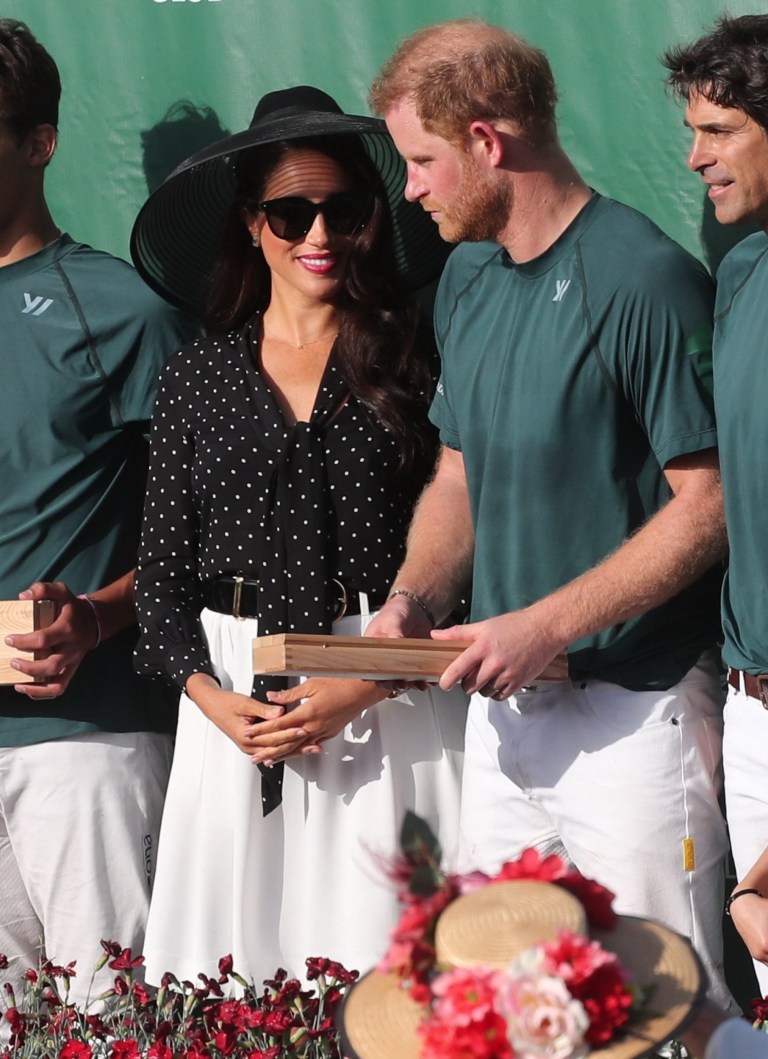 The Queen made the decision to only include working royals after ‘careful consideration’.

It has not been confirmed where the Sussexes will be seen – however, it has been suggested they could watch the Jubilee Pageant through the streets of the capital on Sunday, June 5.

More than 10,000 people have been drafted in to take part in the finale, a £15million procession set to be watched by more than a billion people worldwide.

But Buckingham Palace said the presence of Her Majesty, who has been suffering mobility issues, may not been confirmed until the day of the events.