Residents of Portsmouth and Southampton would be rightly concerned after taking a look at the latest research from Climate Central.

The non-profit climate change organisation, made up of scientists and communicators, has devised an online tool showing the effects of rising water levels.

The browser-based tool lets you select a year with a slider and see which parts of the country will be affected by increased risks of flooding.

Both the Hampshire coast and large areas of Lincolnshire will be particularly vulnerable in just thirty years’ time.

The Isle of Wight and the New Forest will also be dramatically affected, as will London. In fact, the UK capital has increasingly had to use the Thames Barrier to prevent flooding in recent years.

You can try the tool for yourself by clicking on this link.

Scientists have been warning about the perils of rising sea levels as a result of global warming for many years.

If levels rose by two meters, then it could result in the loss of 1.79 million km2 of land around the world. This would include critical regions of food production and the small matter of displacing up to 187 million people.

Back in 2019, a team of international researchers used a technique called ‘structured expert judgment’ to ask 22 ice sheet experts (yes, there is such a thing) to estimate plausible ranges for future sea level rises.

They asked them to consider the projected melting of each of the Greenland, West Antarctic and East Antarctic ice sheets under low and high future global temperature rise scenarios.

Lead author professor Jonathan Bamber, from the University of Bristol, said: ‘Structured expert judgment provides a formal approach for estimating uncertain quantities based on current scientific understanding, and can be useful for estimating quantities that are difficult to model. 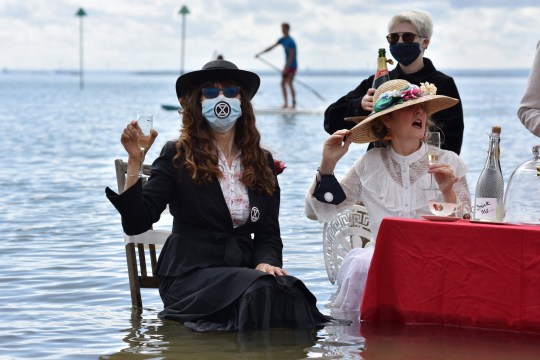 Extinction Rebellion protesters stage a Titanic-themed dinner party in the sea to illustrate the threat of rising sea levels, on Chalkwell beach on August 31, 2020 in Southend-on-Sea, England. (Getty)

‘Projections of total global subsequent sea level rise using this method yielded a small but meaningful probability of subsequent sea level rise exceeding two metres by the year 2100 under the high temperature scenario, roughly equivalent to ‘business as usual’, well above the ‘likely’ upper limit presented in the Fifth Assessment Report of the Intergovernmental Panel on Climate Change.’

The findings suggest coastal communities should not rule out the possibility of 21st century subsequent sea level rise in excess of two metres when developing adaptation strategies.

So, if you want to live there invest in a boat or get better at swimming.