on Friday called for international solidarity in addressing the Covid-19 pandemic, especially through the equitable distribution of vaccines.

The pope made his remarks in his annual Christmas Day speech, which traditionally highlights wars, natural disasters and humanitarian crises around the world.

Pope Francis said the new Covid-19 vaccines were cause for hope but that they must be available to all countries and people.

“We must not allow closed nationalisms to impede us from living as the true human family that we are,” the pope said. “Nor must we allow the virus of radical individualism to defeat us and render us indifferent to the suffering of other brothers and sisters. I cannot put myself before others, putting the laws of the market and patents above the laws of love and the health of humanity.”

“I plead with all the leaders of states, businesses and international organizations to promote cooperation and not competition and to seek a solution for all, vaccines for all, especially the most vulnerable and needy,” he added.

Pope Francis also called for support for “those unemployed or experiencing hardship due to the economic effects of the pandemic, and women who have suffered domestic violence during these months of lockdown.”

This year, because anti-contagion restrictions ruled out the usual Christmas Day gathering of faithful in St. Peter’s Square, the pope gave his address not from a loggia overlooking the square but from the Hall of Blessings inside. 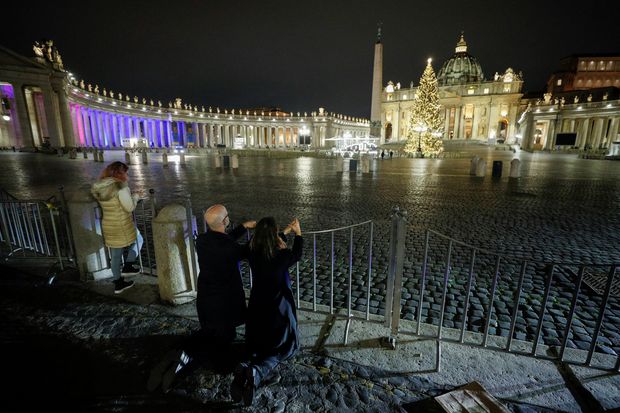 
On Christmas Eve, the pope celebrated Mass in a near-empty St. Peter’s Basilica, with only about 200 people in attendance. The Mass took place at 7:30 p.m., two hours earlier than usual, to permit the congregation to observe Italy’s 10 p.m. curfew.

In his survey of global hot spots on Friday, Pope Francis paid particular attention to the Middle East, especially Lebanon, where an economic and political crisis was heightened this August by a massive explosion in Beirut that killed 200 people and injured more than 6,500.

The pope prayed for Lebanon’s political and religious leaders, representing 18 officially recognized sects, “to lay aside partial interests and commit themselves with seriousness, honesty and transparency to enabling Lebanon to undertake a process of reform and to persevere in its vocation of freedom and peaceful coexistence.”

He lamented the Syrian civil war, which has caused millions of people to flee the country and displaced millions more within it. Referring to Iraq, which he plans to visit in early March to promote reconciliation and support local Christians, the pope underscored the plight of the Yazidi minority, the target of a genocidal campaign by Islamic State militants.

Pope Francis prayed that “Israelis and Palestinians regain mutual trust and seek a just and lasting peace through a direct dialogue.” Since August, four Muslim-majority countries have agreed to normalize relations with Israel in U.S.-brokered deals, drawing protests from Palestinian leaders, who say any such moves should be linked to the establishment of Palestinian statehood. The Vatican has consistently supported the two-state solution as the way to resolve the Israeli-Palestinian conflict.

The pope touched on armed conflicts, civil unrest and natural disasters in Africa, Asia and the Americas, including more than a year of protests over economic and political questions in Chile.

The pope ended with a special word of concern for the Rohingya, a Muslim minority in Buddhist-majority Myanmar.

According to the United Nations High Commissioner for Refugees, more than 750,000 Rohingya refugees have been driven by violence into neighboring Bangladesh since August 2017. The pope met with a group of Rohingya refugees on a visit to Bangladesh in December of that year.

“I cannot forget the Rohingya people,” Pope Francis said Friday. “May Jesus, who was born poor among the poor, bring them hope amid their sufferings.” 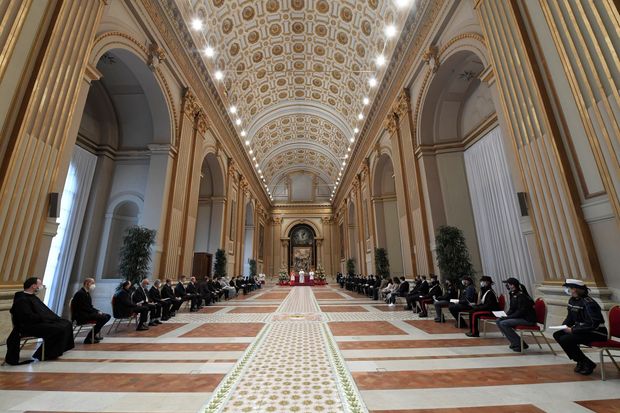 Pope Francis delivered his traditional Christmas Day speech from inside the Hall of Blessings.