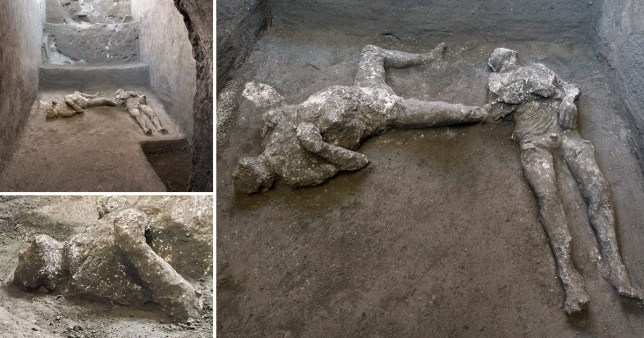 The casts of what are believed to have been a rich man and his male slave fleeing the volcanic eruption of Vesuvius nearly 2,000 years ago (Picture: AP)

Archaeologists have discovered the remains of two men who died in the volcanic eruption that destroyed the ancient Roman city of Pompeii nearly 2,000 years ago.

The bodies are thought to be of a wealthy man and his male slave who were killed as they fled the catastrophic eruption of Mount Vesuvius in AD79.

The pair, who were lying close together, are believed to have escaped the initial phase of the eruption when the city was blanketed in volcanic ash and pumice, only to then be killed by a blast that happened the following day.

Their remains were found during excavation of the ruins from what was once an elegant villa with a panoramic view of the Mediterranean Sea on the outskirts of Pompeii.

The blast ‘apparently invaded the area from many points, surrounding and burying the victims in ash,’ Pompeii officials said in a statement.

As has been done when other remains have been discovered at the Pompeii site, archaeologists poured liquid chalk into the cavities left by the decaying bodies. 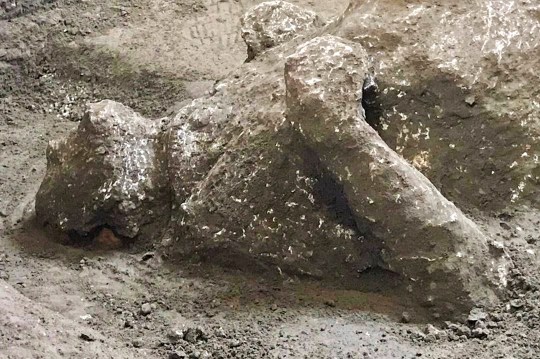 The casts of one of two bodies found after an excavation at Pompeii (Picture: AP) 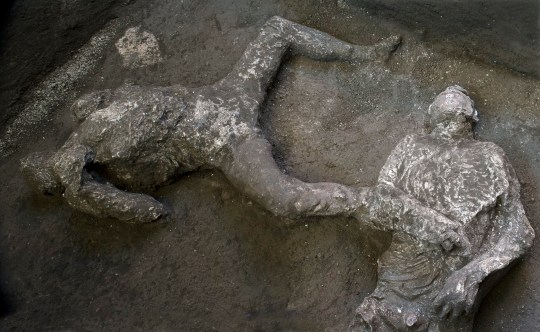 The men were found side by side beneath two metres of ash (Picture: AP)

The technique, pioneered in the 1800s, gives the image not only of the shape and position of the victims in the throes of death, but makes the remains ‘seem like statues,’ according to Massimo Osanna, who is director general of the archaeological park.

Experts said the younger man, who was probably aged between 18 and 25, had several compressed vertebrae, which led them to believe that he was a manual labourer or slave.

He is thought to have been wearing a pleated tunic, possibly made of wool.

The elder man, aged between 30 and 40, had a stronger bone structure, particularly around his chest area, and was also wearing a tunic.

They were found lying in what would have been the corridor of the villa under a layer of grey ash at least two meters (6.5 feet) deep. 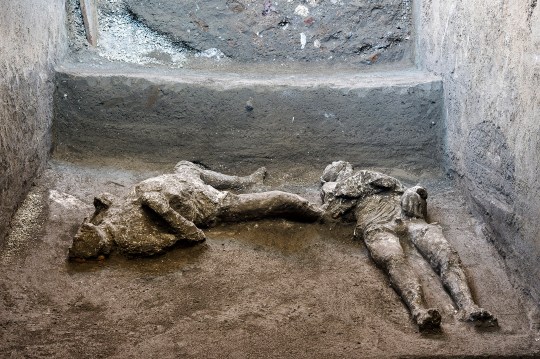 The bodies were found in what was thought to once be an elegant villa on the outskirts of the ancient Roman city (Picture: AP) 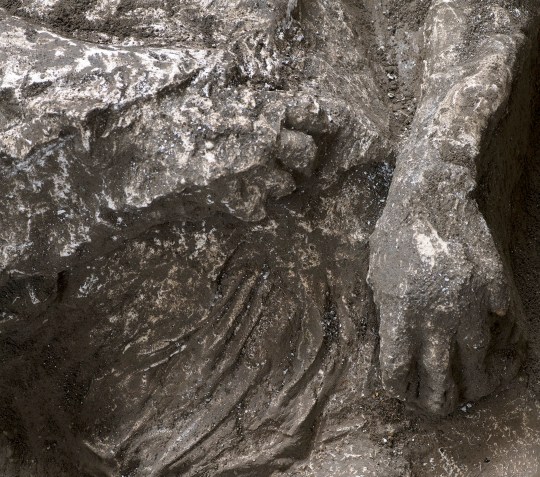 Fragments of white paint were found near the older man’s face, probably remnants of a collapsed upper wall, the officials said.

‘The victims were probably looking for shelter in the cryptoporticus, in this underground space, where they thought they were better protected,’ said Osanna.

Instead, on the morning of Oct. 25, 79 A.D., a ‘blazing cloud (of volcanic material) arrived in Pompeii and…killed anyone it encountered on its way,’ he added.

‘It is a death by thermal shock, as also demonstrated by their clenched feet and hands’.

Osanna said the find was ‘truly exceptional’, while culture minister Dario Franceschini said it underlined the importance of Pompeii as a place for study and research.

The bodies of the men are the latest in a series of discoveries that excavations at Pompeii have yielded in recent years.

In May 2018, the headless remains of a man trying to flee the eruption were found crushed under a rock.

Mount Vesuvius remains an active volcano. While excavations continue at the site near Naples, tourists are currently barred from the archaeological park under national coronavirus measures.

At Remember Bhopal Museum, histories of those affected by 1984 disaster are preserved against apathy, neglect

Delhi in November was more polluted than the past four years in spite of firecracker ban- Technology News, Firstpost