SE, the latest attempt by criminals trying to exploit the world-wide vaccination campaign.

Vials seized by authorities in separate investigations were tested by the company and confirmed to contain bogus vaccine. The vials recovered in Mexico also had fraudulent labeling, while a substance inside vials in Poland was likely an antiwrinkle treatment, Pfizer said.

About 80 people at a clinic in Mexico received a fake vaccine going for about $1,000 a dose, though they don’t appear to have been physically harmed. The vials, found in beach-style beer coolers, had different lot numbers than those sent to the state, and a wrong expiration date, said Dr. Manuel de la O Cavazos, the health secretary of Nuevo León state. 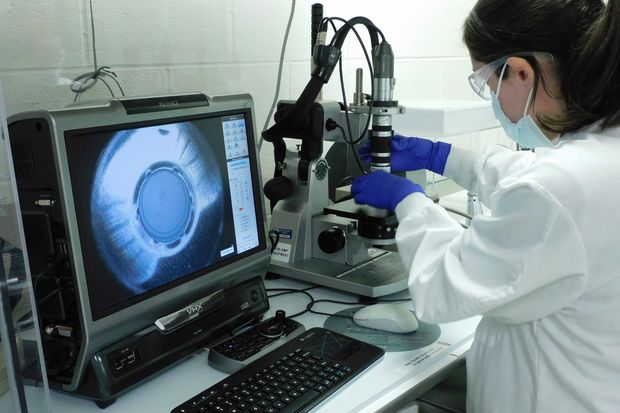 A Pfizer scientist using a microscope to study a vial of a suspected counterfeit Covid-19 vaccine from Mexico.

Polish authorities said no one there had received the counterfeit vaccine, which was seized at a man’s apartment.

The findings are the latest in an effort between law enforcement and drugmakers such as Pfizer,

to stem criminal activity related to the Covid-19 vaccines. The global rollout of shots has provided criminals a fresh opportunity to take advantage of unsuspecting people.

“Everybody on the planet needs it. Many are desperate for it,” said

Pfizer’s world head of security. “We have a very limited supply, a supply that will increase as we ramp up and other companies enter the vaccine space. In the interim, there is a perfect opportunity for criminals.”

The U.S., Mexico and other countries have seized and taken down dozens of websites fraudulently claiming to sell shots or an affiliation with vaccine makers such as Moderna and Pfizer, according to government officials and records. The fake company look-alike websites appeared to be seeking consumers’ personal information to be used in identity-fraud schemes, government and industry officials say. 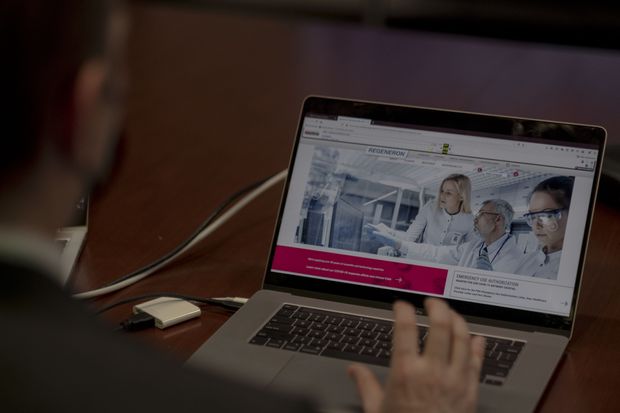 A fake Regeneron website was part of an investigation into vaccine fraud by a section of the U.S. Department of Homeland Security in Fairfax, Va., last month.

Fake shots for the pandemic can be easy to distinguish from real ones, experts say, because legitimate ones can only be found for now sold to governments, making any shots for sale on the internet counterfeit and potentially harmful.

Police in China and South Africa last month seized thousands of doses of counterfeit Covid-19 vaccines in warehouses and manufacturing plants, arresting dozens of people, according to the international police agency Interpol. Mexico also is investigating a shipment of some 6,000 doses of purported Sputnik vaccine from Russia, which were seized from a private plane headed to Honduras in March.

The Russia Direct Investment Fund, which leads efforts to market the vaccine internationally, said an analysis of photographs of the seized batch “suggests that it is a fake.” The Mexican Attorney General’s Office said it was investigating the matter and declined to comment further. Authorities haven’t determined whether the vaccines are genuine.

For months, agents from the National Intellectual Property Rights Coordination Center, an investigative arm of the U.S. Department of Homeland Security, have been investigating fraud related to the Covid-19 pandemic globally, recovering $48 million worth of phony masks, personal protective equipment and other products. Last fall, investigators shifted their focus to include Covid-19 vaccines that were nearing potential clearance by regulators, beginning with online scams. They have removed 30 websites and seized 74 web domains, according to IPR officials.

So far, no counterfeit vaccines have been discovered in the U.S., according to the DHS. But limited supply of Covid-19 shots and their high demand can steer people to seek vaccinations outside official channels, particularly in countries such as Mexico and Brazil, where Covid-19 cases are high and there is a history of counterfeiting prescription drugs, industry and security experts said.

As Covid-19 vaccines roll out in several countries, counterfeits are being marketed online. WSJ explains how phony vaccines end up on the internet and the risks for people who buy them. Illustration: Crystal Tai (Video from 1/14/21)

“Whenever you see this mismatch between demand and supply in certain areas, there are people who are willing to fill that difference with counterfeits,” said

a consultant with BSI Group who focuses on drug security. “For new drugs, it’s usually just a matter of time before you see people trying to counterfeit them.”

Counterfeiting prescription drugs has grown more lucrative in the past decade, industry and security officials say. The counterfeit prescription drug market is valued at more than $200 billion annually, according to PricewaterhouseCoopers.

Distributing fake Covid-19 vaccines also is easier than stealing and selling legitimate shots because of extreme security measures taken by countries and drugmakers during the pandemic, said Mr. Pelli. “With counterfeits, you kind of can just show up, and say, ‘Here’s Covid vaccines, we’ve got some, don’t ask how,’ and start distributing them,” Mr. Pelli said. 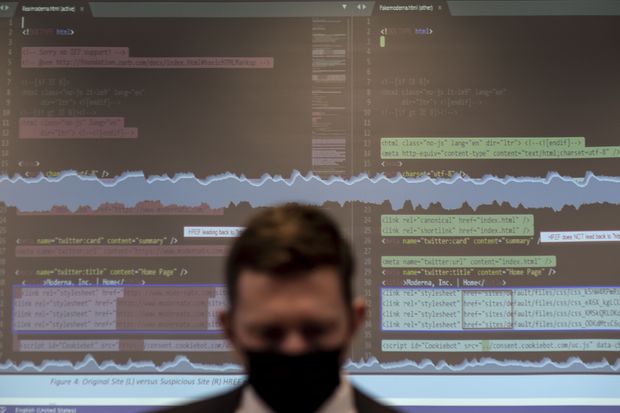 Investigators compared the source code of a real and fake Moderna website at the DHS office in Fairfax, Va., last month.

One tactic used by IPR Center agents is searching the clear and dark web with keywords related to vaccines provided by their manufacturers.

“We’ve never seen so much fraud and misinformation and schemes,” said

director of the IPR Center, which has opened more than 35 cases related to Covid-19 vaccine scams.

Mr. Francis’s agents and Pfizer began meeting weekly last fall to prepare for scams and counterfeiting. During one presentation, company officials said they didn’t initially release images of the vial’s authentic labels partly as a means of staying ahead of criminals.

Pfizer is also working with local law enforcement on counterfeit-vaccine cases like those recently uncovered in Mexico and Poland.

What’s the status of vaccine rollout in your community? Join the conversation below.

Polish police in January seized a number of vials filled with a liquid and labeled as the Pfizer-BioNTech vaccine from a man’s apartment, according to Pfizer and Polish authorities. No one is believed to have received a fake shot, according to Polish prosecutors leading the investigation. Polish police arrested the man, who has been charged with fraud, Polish authorities said.

Pfizer suspected the vaccines were fake because they weren’t in the vials the company uses for its Covid-19 shot, Mr. Kubiak said. They were identical to containers police recovered in the man’s apartment that had a label for another company’s antiwrinkle treatment.

Pfizer tested the liquid in the vials purported to be its Covid-19 vaccine at its laboratory in Groton, Conn., finding it lacked key ingredients and instead contained hyaluronic acid, which is used in skin products.

“People were injected with distilled water,” said Dr. de la O Cavazos in a telephone interview. A spokesman for Mexico’s attorney general’s office, which is carrying out the investigation, declined to comment.

Pfizer, which is working with DHS officials to support Mexican authorities on the case, confirmed the vaccine was fake after using special light and microscopic analysis to find the adhesive label on the vial wasn’t authentic. Mr. Kubiak declined to provide additional details but said Pfizer may conduct more tests on the liquid.

Mr. Kubiak said he expects counterfeiting to worsen as the rollout continues. “Right now, consumers are easily fooled,” he said. “They are desperate for the vaccine.”

Write to Jared S. Hopkins at jared.hopkins@wsj.com and José de Córdoba at jose.decordoba@wsj.com