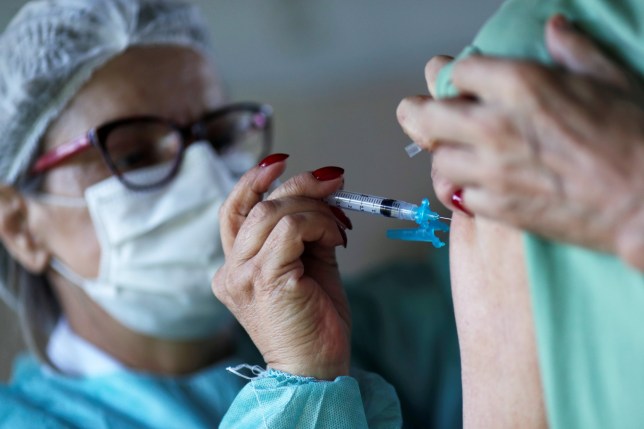 A study found that two out of 92 people had two strains of the virus (Picture: Reuters)

Two patients in Brazil tested positive for more than one strain of Covid-19 at the same time, according to a study.

Scientists from Feevale University swabbed 92 people with coronavirus in Rio Grande do Sul, southern Brazil. The patients were aged 14 to 80 years old, while 50% were men and 50% were women.

Two people in the study were found to have been infected with two different strains of the virus in November 2020, according to local media.

However, the combination of the two strains did not appear to worsen the disease and the patients suffered a mild to moderate illness. They have since recovered.

The study, carried out by the Molecular Microbiology Laboratory at Feevale University, has not yet been published in a scientific journal or scrutinised by other scientists.

Fernando Spilki, lead researcher at Feevale, said the fact that two people tested positive for two strains in such a small sample size shows that the phenomenon may not be so rare.

He believed this could be the second report of a person being infected with two strains simultaneously and said there were indications of co-infection in South Africa.

Researchers also found there were five different strains circulating in the state of Rio Grande do Sul, including a new one called VUI-NP13.

According to Brazilian scientists, when different virus genomes mix in the same person, they can lead to new Covid-19 strains. 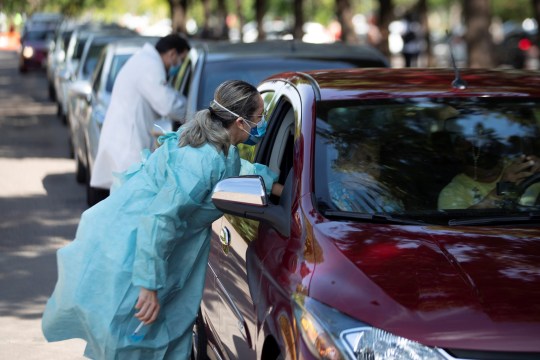 People queue in their cars to receive a vaccine against Covid-19, at a vaccination point in Brasilia, Brazil (Picture: EPA)

Mr Spilki said the findings were ‘worrying’ as he said this suggests new strains could cause problems even amongst people who have developed immunity.

The lead researcher said the findings showed a ‘redoubled need for care which we should already be having in this second wave’.

Professor in respiratory sciences at the University of Leicester, Dr Julian Tang, said it was ‘not uncommon’ for two strains of a virus to simultaneously infect one person.

He told MailOnline: ‘It is perfectly possible for a child attending a primary school to get infected with one variant of Covid-19, and an older sibling to attend secondary school and get infected with a different Covid-19 variant – and for both children to bring their viruses home to infect each other – and their parents with both variants.’

Director of the Worldwide Influenza Centre at London’s Francis Crick Institute, Dr John McCauley, agreed it was possible for one person to get infected with two strains – much like the flu.

However, one scientist, who wished to remain anonymous, told the news site there was a possibility that Brazilian scientists could have contaminated their Covid-19 samples during sequencing and leading to incorrect results.

Brazil is grappling with the second most deadly Covid-19 outbreak in the world after the US.

On Wednesday, 56,002 new cases were recorded along with 1,254 deaths, according to data released by the Health Ministry.