Three of the monkeys tragically had to be put down (Picture: AP/AFP)

Monkeys were left on the loose in Pennsylvania when a lorry carrying 100 of them was involved in a crash.

Several of the creatures, which were set for a research laboratory, disappeared after a collision with another truck on Friday.

Locals were warned to not go near them after many fled the scene of a state highway near an Interstate 80 exit in Pennsylvania’s Montour County.

An urgent search mission was launched by the Pennsylvania Game Commission and other agencies amid freezing conditions.

Crates littered the road as Valley Township firefighters used thermal imaging to try to locate the animals and a helicopter assisted.

All but one monkey was located by Saturday morning – but authorities have now confirmed the missing primate is accounted for.

Three had to be put to sleep after being found, Kristen Nordlund, a spokesperson with the federal Centres for Disease Control and Prevention, said on Saturday.

The drivers of the lorries were not harmed and a passenger was taken to a medical centre for treatment of suspected minor injuries. 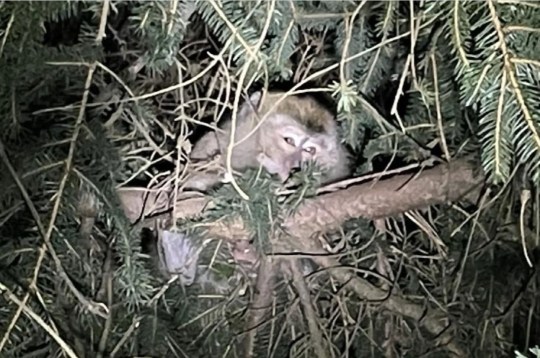 All but one monkey was found by Saturday morning (Picture: Pennsylvania State Police Department) 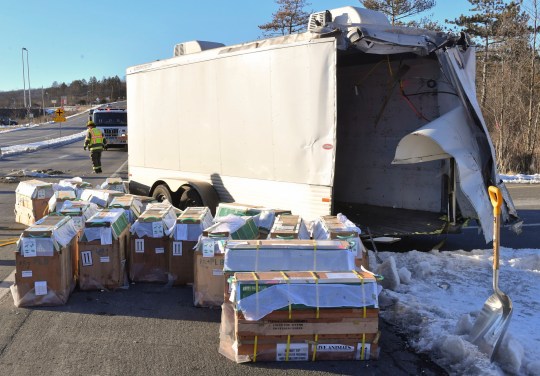 Crates holding monkeys are collected next to the trailer they were being transported (Picture: Bloomsburg Press Enterprise/AP) 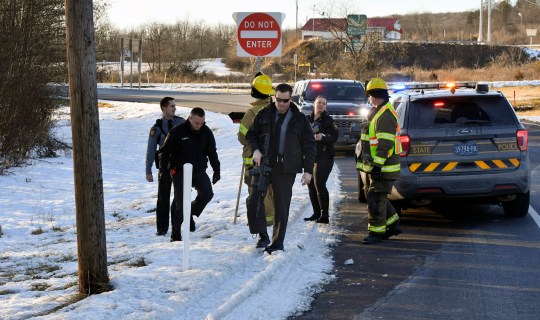 The shipment of monkeys was en route to a CDC-approved quarantine facility after arriving on Friday morning at New York’s Kennedy Airport from Mauritius, an Indian Ocean island nation.

The type of research they were going to be used for remains unclear, although cynomolgus monkeys are often used in medical studies.

They are the most widely used primate in pre-clinical toxicology studies, according to a 2015 paper posted on the website of the National Centre for Biotechnology Information.

Police had earlier urged people not to look for or capture any monkey, with troopers tweeting: ‘Anyone who sees or locates the monkey is asked not to approach, attempt to catch, or come in contact with the monkey. Please call 911 immediately.’

Trooper Lauren Lesher had said the concern was ‘due to it not being a domesticated animal and them being in an unknown territory’.

She added: ‘It is hard to say how they would react to a human approaching them.’