A crematorium worker gets only Rs 375 per body while a hearse driver is retained at a monthly pay of Rs 10,000 and is expected to be available at any and all hours due to the high body count in the pandemic situation

Editor’s note: As the second wave of coronavirus infections ravages parts of India, millions of front-line workers and citizens are caught up in the middle, providing their services to distressed families on one hand while trying to cope themselves on the other. This is part three of a series profiling the stories of these people.

Patna (Bihar): Rambabu Kumar’s mobile phone is constantly ringing. All calls were from the All India Institute of Medical Sciences (AIIMS) – Patna, where COVID-19

patients are being treated. Hospital authorities have been asking him to report to work early and drive the bodies of those who died of COVID-19

to the Bansghat electric crematorium, around half a kilometre away from Patna Gandhi Maidan.

victim. He was waiting for the body to be unloaded.  Near to the mortuary van, there were around 3-4 spots where bodies were being cremated early morning. Ashes were still warm.

Rambabu is originally from Bettiah, a town in West Champaran around 180 kilometres away from the state capital. He was previously working in Delhi and had left the job last year due to lesser pay. He has been driving the mortuary van since then. Talking about the risks involved in the job, he says, “It is a very risky job to bring the bodies of people who have died from COVID-19

infection. There is a risk of contracting the infection. But money is scarce as compared to the risk.” (He was reluctant to share his salary, but later another mortuary van driver who worked with him told Firstpost that drivers usually get a salary of Rs 10,000 per month).

From picking up the body at the mortuary to unloading it at the cremation ground, he has to follow a strict protocol to stay safe.

“When the body is removed from the morgue and placed in the ambulance, I wear personal protective equipment (PPE), masks and gloves. After bringing the body to the cremation ground, I dump the PPE at the cremation ground. Then I sanitize the car. After this I return to the hospital,” Rambabu says.

Given the daily spike in cases, the working hours of mortuary van drivers are not fixed.

“Working hours are uncertain. Usually, we leave at night, but if there are more dead bodies, we have no other choice but to report when called,” he adds. Most of the COVID-19

dead bodies in Patna are cremated at Bansghat.

There are a total of three mortuary vans with three drivers attached to AIIMS-Patna.

stigma has led to people being reluctant to be in contact with those who have tested positive and isolating them from everyday social interactions. Rambabu and his co-drivers face a similar social stigma nearly every day.

“Landowners do not give rooms, hotels do not serve food. Sometimes I think that I would leave the job, but I won’t get any other job. There is a lot of unemployment in the state,” he says.

He shares his experience of how tough it was for him to rent a room in Patna as no one in the city was willing to let a mortuary van driver stay in their vicinity.

“I met at least a dozen landlords for the room. They used to ask me about what I do. I explained to them that I transported the COVID-19

infected corpses to the crematorium by van. As soon as they heard this, they refused to give us a room,” Rambabu told Firstpost.

He only got a room when he finally lied to a landlord that he drove a regular ambulance, he got a room, but only for a night.

infected dead bodies. He ordered us to leave the room. He returned the advance money I had given,” he told Firstpost.

Currently, he stays at a flat shared by two other drivers. One of them being 41-year-old Ramkishore Shah who is also a mortuary van driver.

While Rambabu and Ramkishore have been requesting AIIMS-Patna for a room in the hospital premises to avoid the fear of eviction, the hospital authorities are yet to respond to their request.

infected corpses as it is our job, but we are not treated well. When we go to eat at the hotel, the hoteliers refuse to serve us food saying that we carry COVID-19

infected corpses. The shopkeepers turn us away too,” Ramkishore said.

“So we park the van away from the sight of the hoteliers and then walk to the hotel,” he added.

Talking about the unusual hours of their job, 41-year-old Ramkishore said, “On Monday night, it was only two-three hours after I came to the flat that I got a call from the hospital to bring a COVID-19

One van driver currently carries four to five bodies daily but some days the number reaches 10.

According to officials at AIIMS-Patna, the mortuary van drivers are tested for COVID-19

every 15 days through RT-PCR and if their reports are negative, hospital authorities give them 15 days leave.

Even when they get a negative COVID-19

report, they avoid unnecessary interactions with their neighbours due to fear of backlash.

Rambabu says, “I get 15 days leave in a month. But when I go home, I rarely go out. I hardly meet people because they know that I drive a mortuary van and carry COVID-19

dead bodies. I fear that if those I meet get infected with COVID-19

, even by any other means, people would blame me.”

Sunny Dom, 32-year-old, has been cremating corpses at Bansghat crematorium since childhood.

Doms belong to the Scheduled Caste community and are mainly engaged in scavenging works. Apart from this, they work at crematoriums.

Talking about his earnings, Sunny says, “When I was a child we used to get five hundred rupees for burning a corpse, which we four people used to share among ourselves.”

One dead body requires four people to cremate and the earnings are shared equally among all.

body. This means one person gets Rs. 375 for burning a corpse infected with COVID-19

For protection during the cremation work, Sunny says they get PPE kits from the family members of the COVID-19

“We cremate the corpse that its own people are afraid to touch. We take risks, but the money you get in return is very low. But, we are not employees of Patna Municipal Corporation, so we cannot raise any voice,” Sunny said.

There are two electric chimneys in Bansghat cremation ground, where 48 corpses can be burnt in 24 hours. But, these days the number of corpses arriving daily has increased. Apart from the electric chimney, COVID-19

corpses are cremated in the open ground as well, alongside river Ganga near the crematorium.

About 30 domes in Bansghat cremate corpses in the open. “When I started working as a child, I was scared, but now I got used to it. When the corpse burns, the smell is unbearable and I have to drink desi liquor to carry on with my work,”said Sunny. 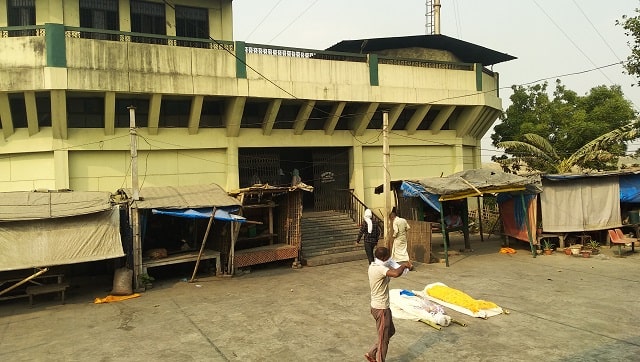 Dead bodies at the crematorium

Sunny and other workers from the community drink 4 glasses of desi liquor throughout the day. Since there is a ban on alcohol in Bihar, Sunny did not reveal the location of the liquor shop, but said that one glass of desi liquor is available for Rs 50.

Sunny has four members in his family – a wife, two sons and a daughter. The daughter is married and both the sons are studying in the first and second class in the government school.

He says, “When I go home, I am afraid to touch my children. I fear they might get infected with coronavirus

, but they’re not afraid to come to me at all. They know that I can put food on the table only if I burn corpses here.”

Doms normally reach the cremation ground in the morning and stay till 10 pm. “In the past, only two or three corpses could be cremated in open. Now with the rise in infection and deaths, more corpses are now. At present, at least 6-7 bodies are cremated daily in the open ground.”

He wants the government to register him and his fellow workers under the Patna Municipal Corporation to avail job and other social security benefits under the authorities.

Differences in the official data and crematorium records

dead bodies are cremated at all the ghats.

When Firstpost visited the Bansghat crematorium more than half dozens of bodies were waiting to be cremated.

death records from officials at all the three crematoriums and compred it with the official figures shared by the health department every day. We found a huge gap in crematorium records and government figures.

According to the data collected from all the three crematoriums, on 2nd and 3rd May, 190 COVID-19

dead bodies (115 bodies at Bansghat, 65 bodies at Gulabi Ghat and 20 bodies at Khajekalan ghat) were cremated whereas official death figure of 2nd and 3rd May in Patna show just 84 deaths, less than half the data recorded at crematoriums.

An official at the Bansghat crematorium told Firstpost that they had sent all the details to the Patna Municipal Corporation where death certificates are prepared and distributed to the kin of the deceased.

He refused to answer as to why there is such a major discrepancy in the data. Repeated calls to Pratyay Amrit, health secretary, Bihar health department and Dr. Manoj Kumar, Executive director of State Health Society went unanswered.

Read Part 1 of the series here

Read Part 2 of the series here