The government also observed that the virus is spreading to hitherto unaffected areas and most cases are asymptomatic. 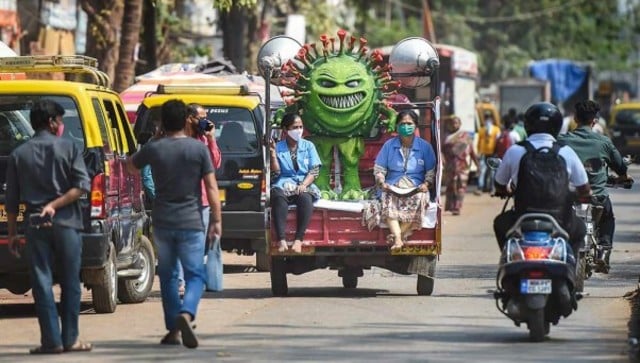 New Delhi: The surge in COVID-19

cases in Maharashtra could be due to lack of fear of the disease among people and pandemic fatigue, the Centre said on Saturday while asking the state to not let its guard down.

The observations were shared by the Central government after a team of experts comprising Joint Secretary of Health Ministry Nipun Vinayak, National Centre for Disease Control (NCDC) Deputy Director Sanket Kulkarni and National Institute of TB and Respiratory Diseases Professor Ashish Ranjan visited the state on 1 and 2 March.

According to the health ministry data, there are over 90,000 active coronavirus

behaviour is not specific to the state — the possible factors are COVID-inappropriate behaviour due to lack of fear of disease, pandemic fatigue; miss outs and super spreaders; and enhanced aggregations due to recent gram panchayat elections, marriage season and opening of schools, crowded public transport, etc.,” according to a report shared by the government.

It advised the state to continue contact tracing, surveillance and testing and ensure strict compliance of protocols.

“Don’t let the guard down. Stay to basics of surveillance, contact tracing and testing. Micro plan and ensure strict compliance of protocols. Strengthen teams to ensure meticulous home quarantine, do focused testing of 100 per cent population in hotspot areas repeated at five days, and isolate positives to check spread,” it said.

The government also observed that the virus is spreading to hitherto unaffected areas and most cases are asymptomatic.

“People are not forthcoming for strictly following quarantine or getting testing done. Sense is that the current wave is less virulent. The health machinery also may have become lax after cases came down after September. Some amongst the doctor fraternity — especially private — may not be counselling patients for testing or following protocols, dismissing it as flu. District/ State – wise participative plan, engaging the community may yield better results rather than knee-jerk reactions. Revenue machinery needs to take full charge,” the government experts team noted.

The areas visited during the two-day inspection in Maharashtra were Nagpur, Yavatmal, Amaravati, Khamli, Devnagar on the first day and Pune, Mumbai and Thane on the second day.

The team of officials said the state desires that while the Centre may indicate the total number to be vaccinated, the actual vaccination implementation may be left to the state with more flexibility in vaccination, inclusion of private hospitals, time flexibility and even data management.

The team of experts suggested that massive campaign, collective behavioral change and influencing for COVID-19

-appropriate behaviour be carried out. It said that those who are opinion makers, like political leaders and doctors, may themselves not be following these.

“Renewed effort at motivation, communication, engagement with opinion makers and strict enforcement is a must. Media orientation/engagement will be useful. The state has now started a campaign — ‘mi jababdaar’ (I am responsible) — that needs to be strengthened,” it said.

cases and treatment according to protocol.

“There is some feedback from Nagpur that at some places senior doctors and specialists do not actually attend COVID patients, leaving management to juniors, affecting nuanced critical care such as oxygen therapy, ventilator management, etc.”

“Some private doctors, unqualified quacks which are first point of contact may not be advising/managing as per protocol. They also have to be reached out to, retrained and reoriented regarding protocols. The treatment protocols may be further clarified to all, including private doctors. Death audits be done at the institutional level to derive actionable public health issues to prevent future deaths,” it suggested.