A man was stoned to death after being accused of desecrating a Quran inside a mosque in Pakistan.

Custodian Mohammed Ramzan, who lived next to the mosque, said he had spotted smoke from within the building and rushed over to find a burnt Quran and the man attempting to burn another.

He pleaded for the man to stop before calling the police.

Officers arrived at the scene to find the man surrounded by an angry crowd and tried to separate him, police spokesman Chaudhry Imran said.

The group began throwing stones at authorities, forcing them to back away prompting the police to send more officers to the scene.

Before they managed to intervene, the mob had stoned their target to death and hung his body from a tree.

The victim has been identified as 41-year-old Mushtaq Ahmed from a village nearby in the district of Khanewal in the Punjab province.

Police chief Munawar Gujjar said the deceased man has been ‘mentally unstable for the last 15 years’ and ‘often went missing from home for days, begging and eating whatever he could find’. 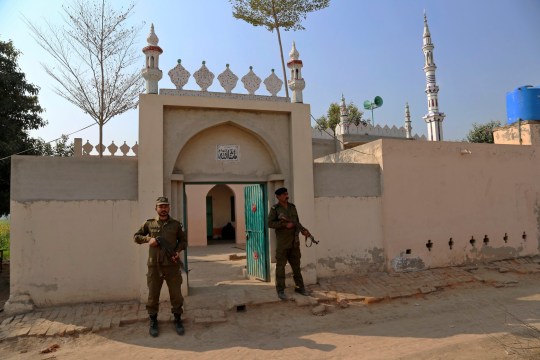 Police attempted to take the man into custody but were deterred by crowds (Picture: AP) 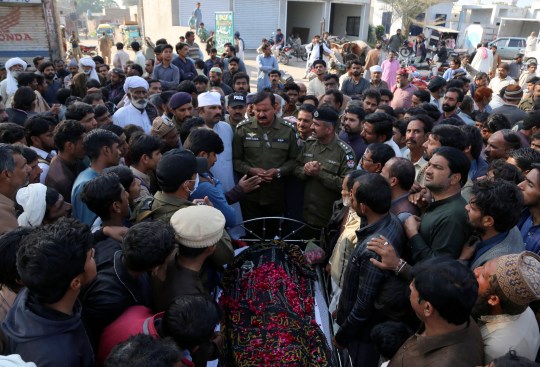 Mushtaq Ahmed’s body was retrieved and given to his family (Picture: AP)

Investigators are now collecting and analysing footage from around the scene to identify those involved.

Some 80 men living from the local area have been detained so far but police believe there were around 300 who took part.

Pakistani prime minister Imran Khan condemned the attack on Mr Mushtaq and accused police of ‘failing in their duty’.

He tweeted: ‘We have zero tolerant for anyone taking the law into their own hands and mob lynching will be dealt with with the full severity of the law.’

Mr Khan also asked the Punjab police chief for a report on the actions taken against the perpetrators.