ISLAMABAD, Pakistan—Pakistan said Tuesday that it was in talks with Russia over importing wheat, as it struggles to make up for crops and food stocks washed away by massive floods, which have killed more than 1,100 people.

appealed for the world to provide more help for Pakistan, saying there was a “yawning gap” between aid promised so far and the scale of the disaster.

More than 30 million people have been affected, or about 15% of the population, and the country estimates it needs $1 billion in aid for immediate relief efforts alone. Pakistan urgently needs food, medicines, drinking water, tents and mosquito nets, he said.

Mr. Sharif said that he believed the country could buy Russian wheat without breaching sanctions imposed on Moscow by the West over its invasion of Ukraine this year.

“We have an offer from them, and we are negotiating,” Mr. Sharif told a news briefing. “We have to fill the stomachs of our people.”

The U.S. said Tuesday that it would provide $30 million in humanitarian assistance to Pakistan, including food, safe water and sanitation needs. “This support will save lives and reduce suffering among the most vulnerable affected communities,” the U.S. Embassy in Islamabad said. Washington and the World Food Program are also seeking to buy Ukrainian wheat, which has been sent as aid elsewhere in the developing world.

Some 3.6 million acres of cultivated land has been affected by the floods, according to the United Nations’ Food and Agriculture Organization. Crops yet to be harvested have been wiped out in part of the country, especially in the worst-hit southeastern province of Sindh. Many people have also seen their stores of wheat for the year washed away as their villages and homes flooded, officials say.

this week broached the idea of allowing some vegetable trade from adversary India, to help with the expected hit to the food supply.

Islamabad has said that climate change triggered by the industry and lifestyles of rich countries contributed to this year’s monsoon calamity. The country has seen three times the normal rainfall of the annual monsoon season, which began in June. Developed nations must come forward to help Pakistan, officials here say, as it produces less than 1% of the world’s carbon emissions.

While it can take months to study the degree to which a phenomenon such as this summer’s floods has been shaped by warming temperatures, scientists generally agree that greater humidity from rising temperatures can cause more intense rainfall.


The U.N. launched an emergency appeal for $160 million for flood relief for Pakistan on Tuesday. Pakistan’s economy was already fragile and this week, the International Monetary Fund agreed to a bailout that the country had negotiated before the floods, which have caused at least $10 billion of economic damage, officials have said.

“The scale of needs is rising like the floodwaters,” said U.N. Secretary-General

in a video message Tuesday, warning that extreme-weather events would become more common, and calling South Asia “one of the world’s global climate crisis hot spots.”

It is only one month before it is time to plant the next wheat crop in Sindh. With much of the province submerged, that looks difficult, officials say. Sindh is flat and at sea level, meaning water isn’t dissipating, they say.

“Water is not being absorbed into the ground,” said Minister for Climate Change

“Where do you drain the water? It is like an ocean everywhere.”

Flights carrying aid to Pakistan started to arrive this week, including from Turkey, the United Arab Emirates and China.

“We extend our heartfelt condolences to the families of the victims, the injured and all those affected by this natural calamity and hope for an early restoration of normalcy,” Mr. Modi tweeted late Monday.

He didn’t say whether India was considering sending aid. An offer or dispatch of aid would be a first for the government of the ruling Hindu nationalist Bharatiya Janata Party. Ties between the two rivals have turned chillier since the BJP came to power in 2014. Mr. Modi’s office and the Indian Foreign Ministry didn’t reply to requests for comment.

The monsoon came early to Pakistan this year, and instead of falling as usual mostly in the north of the country, it first hit the southwestern province of Balochistan and then Sindh, said Lt. Gen. Akhtar Nawaz, the chairman of Pakistan’s National Disaster Management Authority.

Forecasts had suggested that the rains would be about 25%-30% more than normal, Lt. Gen. Nawaz said. In the worst-hit areas, the rainfall since mid-June has been up to six times the 30-year average, said Pakistani officials.

“This is something we never thought of and had never experienced,” said Lt. Gen. Nawaz. 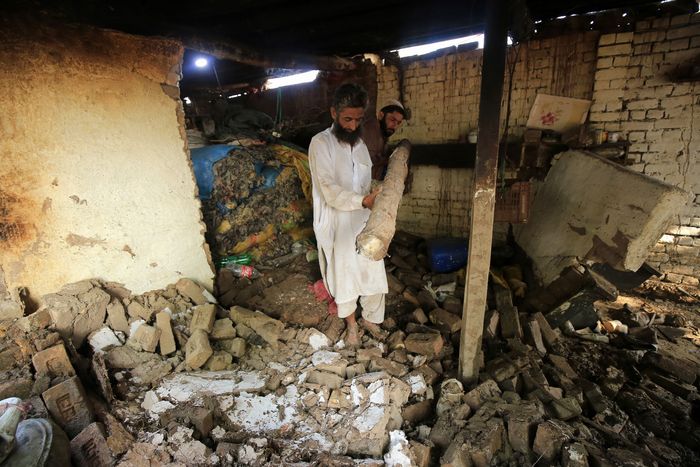 Residents investigated flood damage at a house in Pakistan’s province on Tuesday.

—Tripti Lahiri contributed to this article.