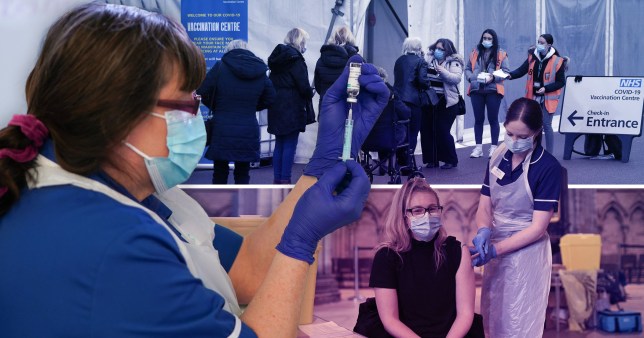 The rollout of the AstraZeneca jab has been paused in parts of Europe (Picture: AFP/Getty)

Uptake of the Oxford/AstraZeneca jab is remaining steady in the UK, despite some European countries pausing their roll outs.

It comes as a scientist said that blood clotting episodes could be ‘causally related’ to the coronavirus vaccine – contradicting previous statements – though experts have been unified in saying that the benefits of the jab far outweigh any risks.

She said all studies indicated the jab was safe and effective, while the fact different countries were reviewing their position was a sign that the system was working.

Speaking to the BBC’s Good Morning Scotland radio programme, Professor Bauld noted that reports of blood clots were ‘very rare’ and branded a direct link to the vaccine as very unlikely.

She said: ‘These kinds of pauses and reviews are a sign that the system is working.

‘Because when you see either deaths or unlikely adverse events that you wouldn’t anticipate or you didn’t see in the trials it’s reasonable for regulators to look at this. 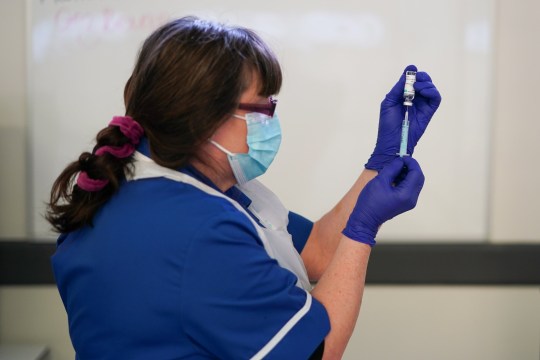 A medic draws up the AstraZeneca/Oxford vaccine at a vaccination centre in Penrith, England (Picture: Getty Images)

‘The MHRA (Medicines and Healthcare Regulatory Agency) is still consistently saying there’s no cause for concern and that is absolutely the message to people.’

It comes as Germany suspended use of the vaccine for people aged under 60 due to fears of a link to rare blood clots.

And on Friday, the Dutch government also said it would temporarily halt the jabs for the same age group, after it received five reports of blood clots with low blood plate counts following vaccinations.

Now a medical microbiologist at the University of East Anglia said evidence is growing that a number of rare blood clots among those who have had the vaccine is ‘causally related’.


Professor Paul Hunter told the BBC Radio 4 Today programme: ‘It is not uncommon to get clusters of rare events purely by chance.

‘But, once you find that cluster in one population and it then crops up in another – such as previously in the German and now in the English – then I think the chances of that being a random association is very, very low.

‘Clearly more work needs to be done, but I think the evidence is shifting more towards it being causally related at the moment.’

The MHRA said on Thursday that it had identified 30 cases of rare blood clot events among people in the UK who had received the AstraZeneca jab, following similar reports from Germany.

However Professor Hunter again stressed that the risks of taking the AstraZenca vaccine were still far outweighed by the risks of not getting the jab.

He said: ‘The chance of dying if you don’t have the vaccine is many times greater than the risk of dying from CVT (cerebral venous thrombosis) after the AstraZeneca vaccine, even if it does turn out, as I suspect it will, that this link is causal.’

Brits are also being injected with the Pfizer/BioNTech vaccine, with others likely to become available in the country shortly.

Nearly 31.5 million first doses and 5.2 million second doses of Covid-19 vaccines have been delivered so far in the UK.