While the BJP alleged that a party worker was ‘beaten to death’ by the police during a baton charge, police claimed there was no lathi-charge and the cause of death was being ascertained 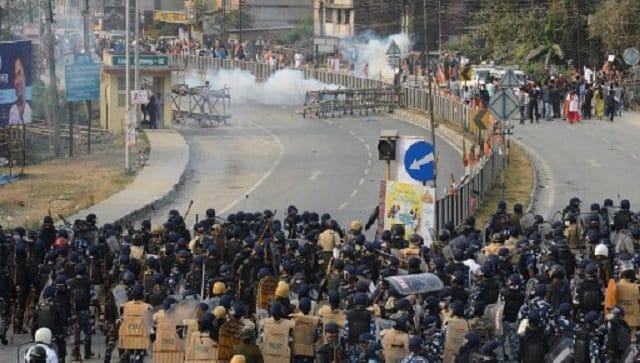 Police using watercannons and burst teargas shells during a protest rally called by the BJP against the West Bengal rulling government in Siliguri while protesters threw stones and tried to breach barricades. AFP

Siliguri: Police fired teargas shells and used water cannons on Monday to quell a violent protest called by the Bhartiya Janata Yuva Morcha (BJYM) against the Mamata Banerjee government during which a BJP worker died, officials said. Several protesters and police personnel were injured in clashes.

The BJP alleged that a party worker identified as Ullen Ray was “beaten to death” by the police during a baton charge. However, police claimed there was no lathi-charge and the cause of death of the protester was being ascertained.

The BJP condemned the police action and demanded imposition of President’s rule in West Bengal in view of “breakdown of law and order”. The party has called a 12-hour bandh in north Bengal on Tuesday.

BJP workers were seen fighting pitched battles with police after they were stopped from moving past barricades at two points near branch secretariat ‘Uttarkanya’ during the rally called to protest the TMC “misrule”.

The BJYM, the youth with of the BJP, led by its chief and Lok Sabha member Tejaswi Surya, took out two protest marches claiming the state government had not fulfilled the promises made to the people of north Bengal and that the benefits of welfare schemes had failed to reach the common man.

Police used water cannons and burst tear gas shells to stop the protesters from marching to the secretariat and were pelted with stones.
Agitators also set fire to some bamboo barricades.

State BJP Dilip Ghosh, who led a rally to Fulbari Bazar, one of the two approach points to the secretariat building, said the government was “using coercion” as it was scared of the saffron party’s rise in West Bengal.

A second rally, led by the party’s national general secretary Kailash Vijayvargiya and BJYM president Tejaswi Surya, broke the first two layers of the police cordon near Tinbatti more, about one km from Uttarkanya, but could not get past the third. Police sprayed the protesters with coloured water.

According to BJP sources, Vijayvargiya and Surya had to be escorted to their vehicles by their security guards after the former fell ill.

Ghosh later claimed that a party activist, injured in police action, had succumbed to injuries at a local hospital. “One of our party activists Ullen Ray, who was mercilessly beaten up by police, died at a hospital here. Many other BJP workers have been injured and are being treated at the hospital,” Ghosh said.

However, police rejected the allegation and claimed no lathicharge had taken place.

“Today in Siliguri, serious acts of violence were committed by the supporters of a political party during their protest program. They resorted to arson, brick-batting, firing and vandalism of govt property,” West Bengal police said in a tweet.

“Police showed restraint and didn’t do lathicharge or use firearms. Only water cannons and tear gas were used to disperse the violent crowd. However, death of a person has been reported. Body is being sent for PM (post-mortem). The actual cause of death will be known only after the PM.” it said in a series of tweets.

Talking to reporters later, Vijayvargiya demanded President’s Rule in the state, claiming “law and order has collapsed”. “There is criminalisation of police in West Bengal. The way they carried out a brutal attack on peaceful protesters shows the state machinery has been politicised totally,” the BJP’s West Bengal minder alleged.

“This ‘tanashahi’ (dictatorship) cannot continue. We ask all democratic forces to join hands to dislodge this undemocratic, tyrant government.”

BJYM state president Saumitra Khan said at least 50 protesters were injured and threatened to launch an agitation against “police atrocity” across the state.

Senior TMC MP Sougata Roy insisted police showed restraint by not resorting to firing despite serious provocation. Roy alleged the BJP was repeatedly trying to create disturbance in the state in the name of democratic movements.

He said though it was unfortunate that many BJP workers were injured, the situation had gone out of control.

In October this year, similar clashes between police and BJP supporters took place during the ‘March to Nabanna’, the state secretariat in Howrah district.