The Omicron variant of the coronavirus is weeks away from becoming the dominant strain in parts of Europe, government officials and scientists say, as emerging evidence from the U.K., Norway and South Africa suggests that vaccines may offer significant protection against severe illness with the variant.

The evidence is likely to reinforce government efforts to broaden vaccination coverage and offer booster shots.

Cases so far have overwhelmingly been mild. Officials in Norway say that is likely because so many of the infections have been in vaccinated people. Many cases are still only a few days old, however, and scientists say it is too soon to be sure whether the level of disease severity reported reflects some property of Omicron itself, or is a result of factors such as the protection afforded by vaccination or prior infection, or age.

The variant has triggered border closures world-wide in the run-up to Christmas and sparked new anxiety over how soon the world will be able to put the pandemic behind it. The picture emerging from labs in South Africa, the focus of the Omicron outbreak, and increasingly from Europe is that the variant is likely more transmissible than previous versions of the virus and may be able to more easily sidestep the immunity from prior infection or vaccination. It displays dozens of mutations, some linked to faster spread and some whose properties are entirely unknown.

told attendees of The Wall Street Journal’s CEO Council Summit conference that Omicron appears to be more contagious but cause less severe disease. But he stressed that more work needs to be done to know for sure.

Students from Norway waited to be tested for Covid-19 before boarding a flight to Amsterdam at Johannesburg airport last month.


“I don’t think it’s good news to have something that spreads fast,” he said. “Spreads fast means that it will be in billions of people and another mutation may come. You don’t want that.”

The World Health Organization has designated Omicron a variant of concern, warranting much greater surveillance by national authorities. The Biden administration is preparing to fast-track authorization of revamped Covid-19 vaccines to combat Omicron, and has extended a requirement that travelers wear masks through mid-March on planes, buses and trains, and at domestic transportation hubs such as airports and indoor bus terminals, rather than allowing the requirement to expire on Jan. 18.

professor of epidemiology at Imperial College, estimate the number of Omicron cases in the U.K. is currently doubling every three days. That suggests the variant could displace the dominant Delta strain as soon as next month, said Prof. Balloux.

told lawmakers on Monday that none of those infected needed hospital treatment, though that was before the latest uptick in cases.

In Norway, 130 people who were at an upscale restaurant hosting a Nov. 26 company Christmas party have tested positive for Covid-19. About 30 of those cases are confirmed Omicron infections, authorities said Tuesday; the remainder are suspected of being so.

Scientists and vaccine makers are investigating Omicron, a Covid-19 variant with around 50 mutations, that has been detected in many countries after spreading in southern Africa. Here’s what we know as the U.S. and others implement travel restrictions. Photo: Fazry Ismail/EPA/Shutterstock

That outbreak offered epidemiologists an early, if anecdotal, glimpse into how easily the variant spreads among the vaccinated. Eleven days in, however, none of them has been hospitalized, which Norwegian authorities chalked up to the fact that only vaccinated employees were allowed to attend the party. Several are feeling better, and are due to be released from isolation Tuesday or Wednesday, said Tine Ravlo, the chief physician for Oslo’s Frogner district.

“They’re feeling OK,” she said. The remainder have mild symptoms, like a cough, fever or a runny nose.

Still, Norway’s government has tightened restrictions, which its disease-control agency, the Norwegian Institute of Public Health, said Tuesday would be necessary until a clearer picture develops. Hospitals have already been under pressure from mainly unvaccinated patients, and from sick health workers having to take days off. Omicron could potentially worsen that burden, authorities said, and the variant is expected to become Norway’s dominant strain by January at the latest. 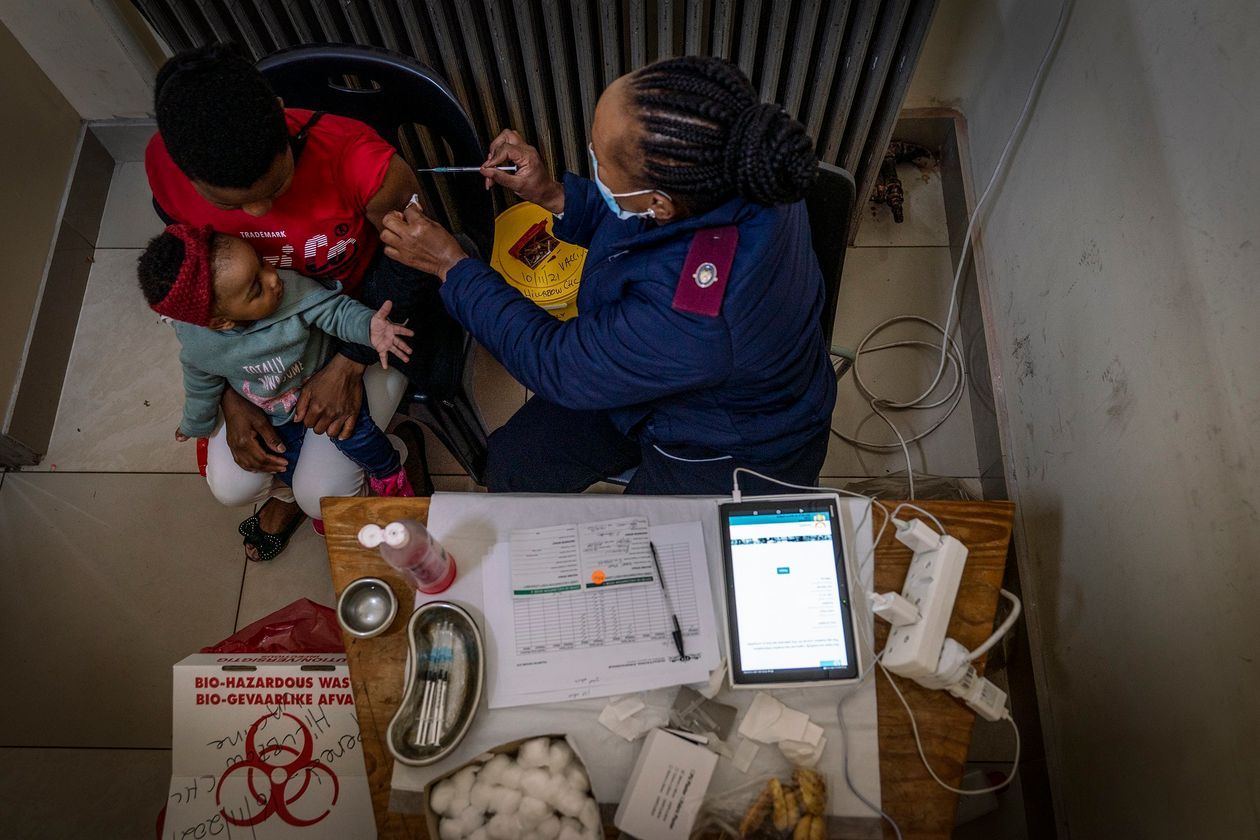 A woman was vaccinated in Johannesburg on Monday.

Meanwhile, Norway on Tuesday said it had reduced the waiting time for booster shots, and began offering them to more age groups and professions. A panel of scientists advising the U.K. government on vaccine policy recently recommended the booster shots be offered to all adults.

“We expect vaccines to retain their effectiveness in preventing severe Covid-19 disease even if they may not prevent infections,” Preben Aavitsland, senior physician at the Norwegian Institute of Public Health, wrote in an email. “The protection against severe disease is, however, not 100%. So when there is much coronavirus in the community, there will be severe cases among the vaccinated elderly and among unvaccinated middle-aged and elderly people.”

“It will be the dominant strain in this country and all over Europe (and America) in the matter of a month or two,” he added.

Denmark has traced clusters of Omicron cases to two large events on Nov. 27: a Christmas lunch for 150 people in Viborg and a concert attended by around 2,000 people in Aalborg.

The CEO of Pfizer tells the WSJ CEO Council Summit he is hopeful that Covid-19 will be under control by the middle of next year. Photo: Ralph Alswang for The Wall Street Journal

Sixty-four attendees of the lunch have tested positive for Omicron, a spokeswoman for the Danish Patient Safety Authority said. Ten of the concert attendees have been confirmed infected with the variant. The vaccination status of the Omicron cases isn’t clear, though Denmark has vaccinated more than 75% of its population, according to data compiled by the University of Oxford’s Our World in Data project.

Scientists are working to figure out how the variant spreads so quickly. U.K. public-health authorities say they have found evidence that an infection can be passed on sooner than with earlier variants.

Martin Hibberd, professor of emerging infectious diseases at the London School of Hygiene and Tropical Medicine, said this gap was usually around six days for earlier versions of the virus, including Delta. Omicron can seemingly spread from a newly infected person to another host in as little as three days, he said.

“That would have a serious effect on the transmission scale,” he said. 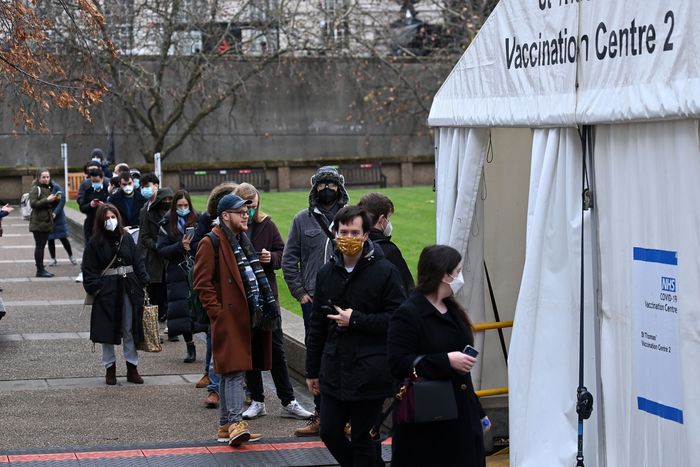 A vaccination center in London on Tuesday.

Write to Jason Douglas at jason.douglas@wsj.com and Drew Hinshaw at drew.hinshaw@wsj.com