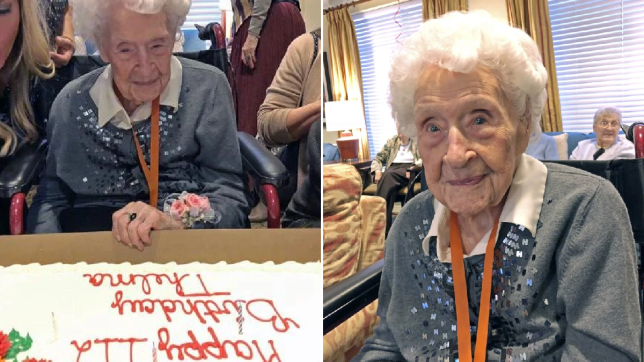 A 114-year-old woman who recently became the oldest living American does not care about holding the record – but is bothered by coronavirus restrictions that have kept her from spending time with her friend.

Thelma Sutcliffe of Omaha, Nebraska, got her Covid-19 shots at her first opportunity and cannot wait to have a sit-down meal with her longtime friend Luella ‘Lou’ Mason.

‘She’s just looking forward to the day that I can finally eat with her in the dining room again,’ Mason told the Omaha World-Herald. ‘She tells me, “I know we have to go by the rules, but I don’t like it.“’

Sutcliffe, who was born on October 1, 1906, and has lived through the 1918 flu pandemic and two World Wars, became the oldest living American when 115-year-old Hester Ford died on April 17. Sutcliffe is also the seventh-oldest person in the world, according to the Gerontology Research Group.

Mason, who became close to Sutcliffe after the latter moved to the Brighton Gardens senior living center in 2017, explained her friend’s desire to get together while visitors were not allowed in the dining room due to the pandemic.

‘I’m happy (Brighton Gardens) is keeping things locked down because it’s keeping everyone healthy, but Thelma is as determined as ever to do what she wants to do,’ Mason said. ‘She asks me every time I visit, “Are you going to eat with me today?” It breaks my heart that I can’t.’

Sutcliffe has been eating her meals in her room. Mason, who is also Sutcliffe’s power of attorney, has had to call the senior living center 24 hours in advance to schedule a visit.

While Sutcliffe welcomed the vaccine, she has not been as receptive to coronavirus testing.

‘They went in to test her for Covid and they told her that I had approved the test,’ Mason said. ‘She looked at (the swab) and looked up at the person holding it and said, “You’re not going to be sticking that thing up my nose. You can tell Lou to stick it up hers.“’

Sutcliffe is losing her sight and hearing but her mind remains ‘very sharp’, Mason said. The eldest American does not like to talk about her longevity and is ‘very particular about her appearance,’ including not allowing photos unless everything is to her liking.

‘As far as her age, she doesn’t believe in worrying at all,’ Mason said. ‘She always says, “What good does it do to worry?” I think that’s how you live to be 114 years old.’