The heatwave has broken countless temperature records across the Pacific northwest of America (Picture: Reuters/Getty)

America’s Pacific northwest is experiencing some of the hottest temperatures ever recorded thanks to a ‘heat dome’ that has caused temperatures to soar past 100F.

On Monday a swathe of new temperature records were broken as Salem in Oregon hit 117F, Portland experienced 115F heat and Canada recorded its hottest day ever – as the mercury hit 117F.

That record was broken in Lytton, British Columbia, just a day after the same village set the a 116F record.

Meanwhile in Seattle, Washington, citizens endured searing 108F heat that comfortably eclipsed the previous 104F record just a day before. The weather in the city was so hot that its roadways began to buckle under the heat. 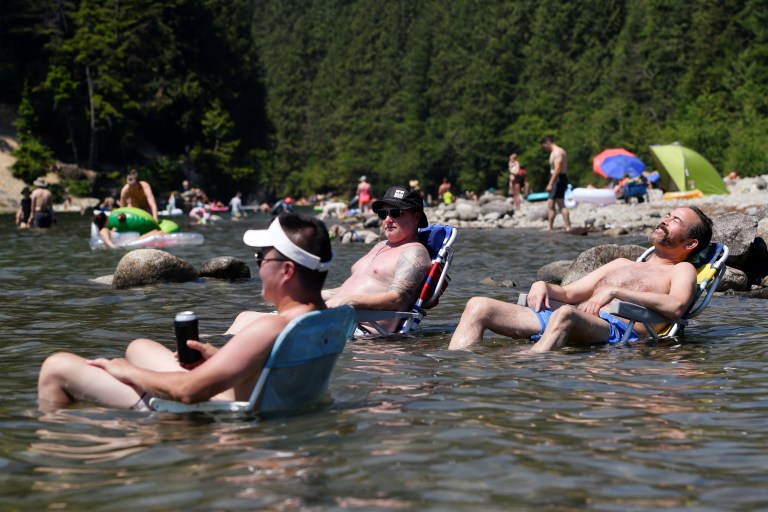 Beachgoers in British Columbia sat in the water to cool off as temperatures topped 30C (Picture: REUTERS/Jennifer Gauthier) 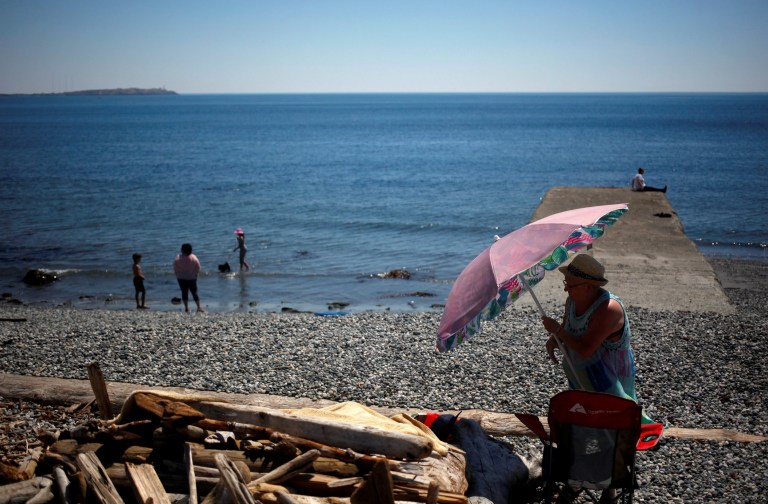 People cool off during the ‘heat dome’ in British Columbia on June 28 (Picture: Reuters)

Temperatures have grown so unbearable hot in some west coast cities that schools and even Covid vaccinations clinics have had to shut down, while an Olympics qualifying event had to be postponed in Eugene, Oregon.

Residents have been forced to take shelter in cooling stations set up in cities like Portland in a bid to avoid the extreme heat.

The dangerously hot weather have been caused by an intense high-pressure jet stream known as a ‘heat dome’ – which leads to the heat and humid conditions being trapped closer to the earth than usual.

According to CBS News the ‘heat dome’ phenomenon is such a rare occurrence that it may only happen once in 1,000 years. 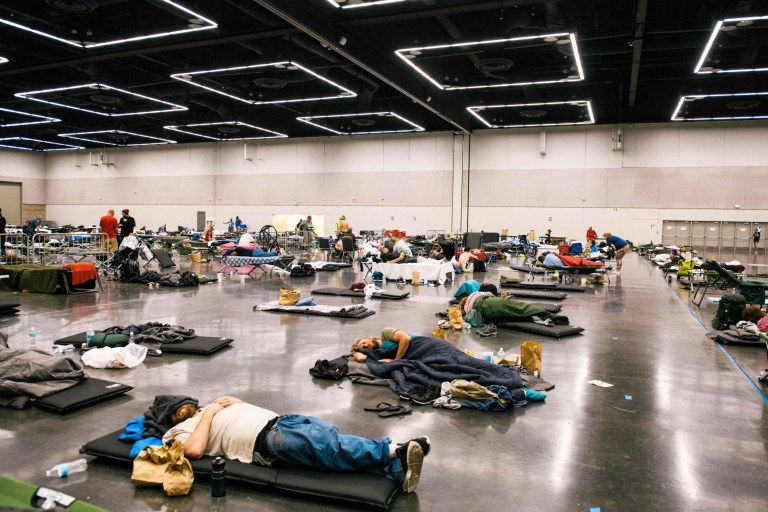 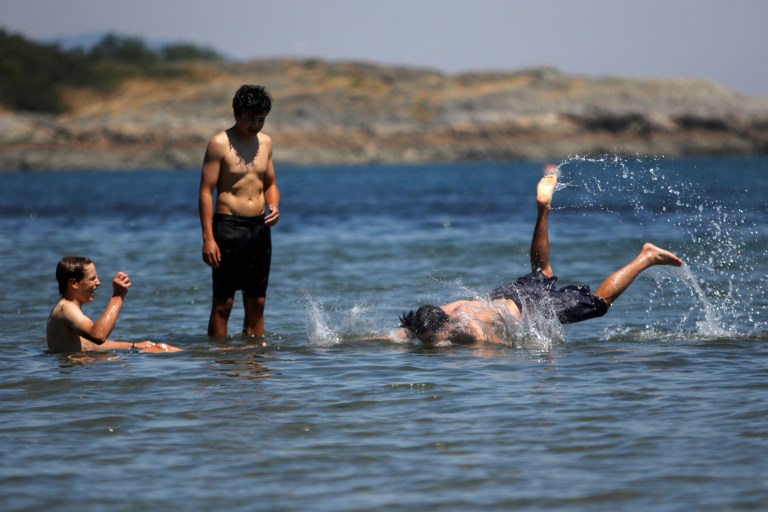 The heat dome has led to temperature records tumbling across the US (Picture: Reuters) 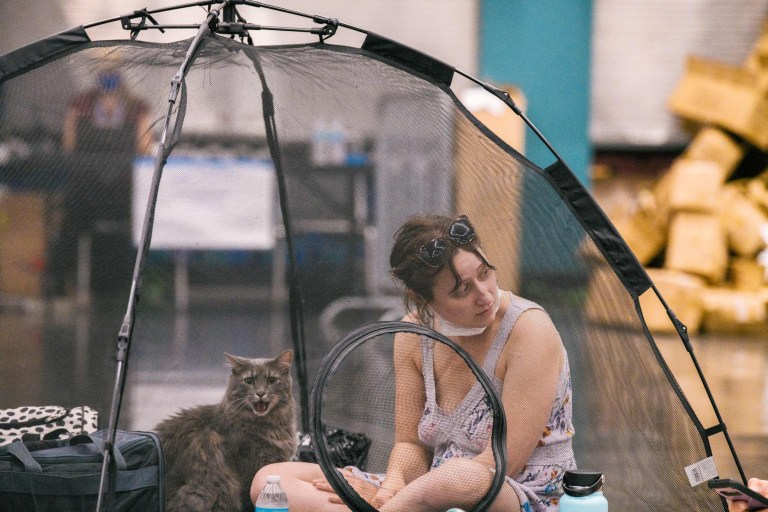 A woman and her cat rest inside a tent at the Oregon Convention Center cooling station (Picture: AFP/Getty)

He added that the ‘heat dome’ can bring lethal heat and said the last major heat wave in Canada, in 2018, left nearly 70 people dead.

Phillips added: ‘And it’s not just a one-day wonder. It’s a seven-day kind of thing.

‘We are the second coldest country in the world and the snowiest. We often see cold snaps and blizzards but not often do we talk about hot weather like this.

‘Dubai would be cooler than what we’re seeing now.’

Colby Neuman, a meteorologist with the National Weather Service, told The Oregonian that Salem’s temperatures were the highest on record for the city, making Monday the hottest day there in at least 130 years.

Across the northwest stores sold out of portable air conditioners and fans, while cities opened emergency cooling centers and outreach workers handed out bottles of water and hats.

In total more than 160 local heat records have been set so far, including in the ski resort town of Whistler. 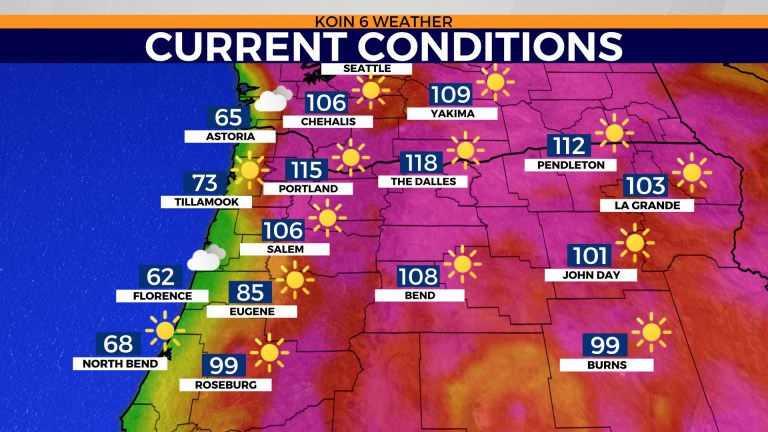 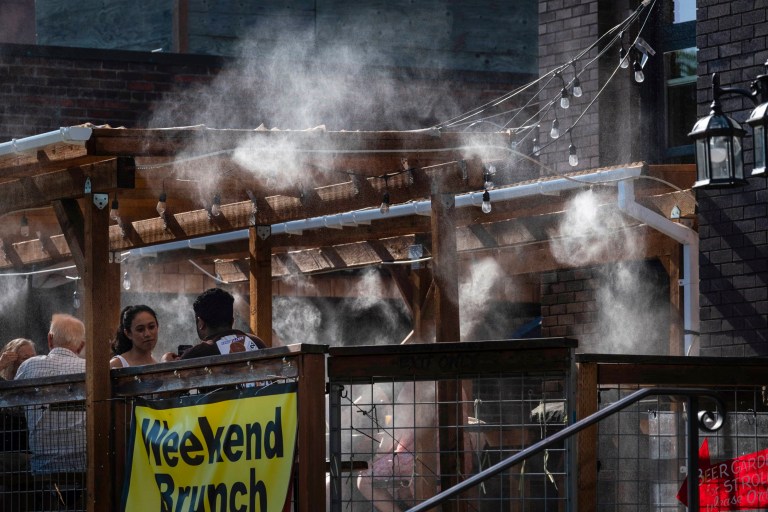 The Kangaroo and Kiwi restaurant in Seattle uses misters to keep it outdoor patrons cool on the hottest day in the city’s history (Picture: AP)

Despite the dangerous temperatures many people still flocked to beaches and pools as emergency services, overwhelmed with calls, warned of delays for ambulances.

Canada’s Environment agency issued alerts for British Columbia, Alberta, and parts of Saskatchewan, Manitoba, Yukon and the Northwest Territories over the weekend saying the ‘prolonged, dangerous and historic heat wave will persist through this week.’

Temperatures, however, will begin to cool across much of the Pacific northwest from Wednesday. The highs will drop to cooler and more manageable 80F to 90F. 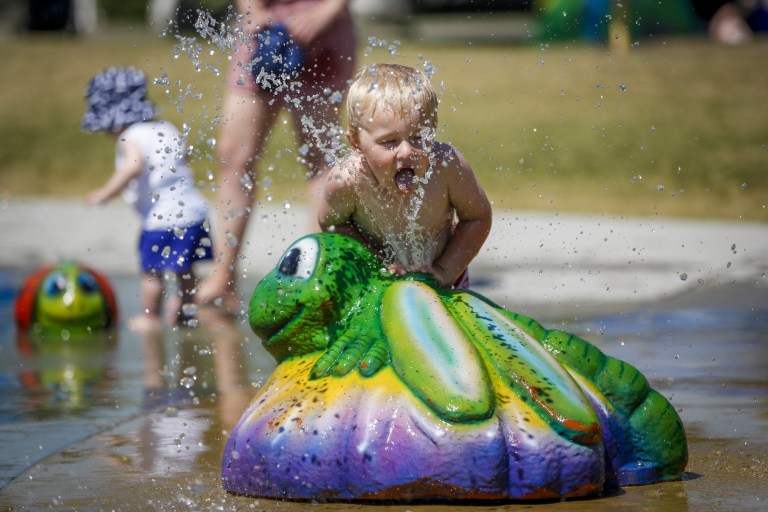 Even those temperatures are still well above the 60F to 70F highs that are normal for this time of year.

Because of climate change, record-setting temperatures are becoming more frequent in the US and around the world.

Globally the decade to 2019 was the hottest recorded, and the five hottest years have all occurred within the last five years.

Which states in India have most highway accidents? What are black spots on nationwide highways?