Martin White was looking through his trove of abuse images at a computer near a window and was visible to passersby outside (Picture: Northamptonshire Police)

A paedophile was caught after he was spotted brazenly viewing child abuse images near a window.

Martin White, 64, was looking at vile pictures on a computer when he was seen by someone attending a nearby house party celebrating New Year’s Eve.

When his home and computer were searched, a collection of 75,000 illegal images were uncovered.

Many of the pictures found in White’s possession were dubbed Category A, the most serious.

Recounting the sighting in December 2018, the unnamed witness said: ‘I saw the male through the window on his computer.

‘I noticed that he was looking at pornographic images. One was of a young girl, aged about 9-10.

‘She was not wearing anything from the waist down.’ 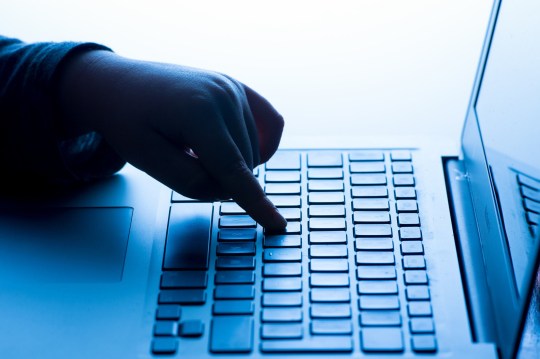 After a lengthy legal process, he pleaded guilty to multiple offences related to indecent images of children.

He was jailed for one year and three months at Northampton Crown Court.

DC Adam Brooks from Northamptonshire Police said: ‘This was an unusual case as we rarely get witnesses to these types of crimes.

‘People like Martin White often falsely believe that their crimes are victimless but the fact is in order for these images to be created children are abused.

‘I am pleased the courts have handed White a custodial sentence because in my view – anyone in possession of child abuse material poses a significant risk to children.

‘This addiction is very difficult to manage in the community so custody was the right decision.

‘As the internet gets bigger our tools get better and I would like to reassure the Northamptonshire community that we will catch those who possess child abuse material.’