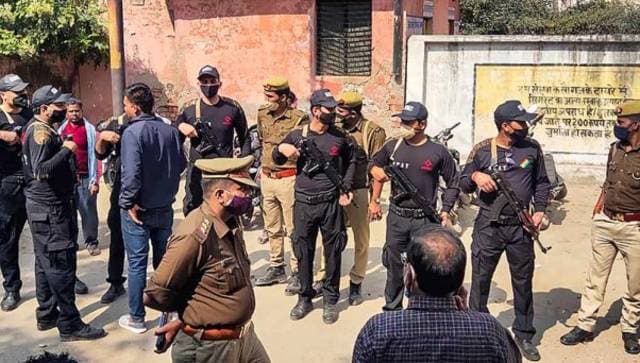 Security personnel stand guard during the post-morterm of two teenage girls who were found dead in a filed near Baburaha village in Unnao district.

Unnao: There were no injury marks on the bodies of the two teenage girls found dead in Unnao and the cause of their death could not be immediately ascertained in the post-mortem, Uttar Pradesh Police chief Hitesh Chandra Awasthi said on Thursday.

The third girl, admitted in a critical condition to a Kanpur hospital, was being treated for suspected poisoning and is presently on a ventilator, sources in the healthcare facility said.

A police officer also rejected suggestions that the hands of the girls were tied, citing the absence of any injury marks. Viscera samples the two victims have been preserved for further examination, Awasthi said.

The Opposition slammed the government over law and order, and demanded a high-level inquiry, while Chief Minister Yogi Adityanath took a serious note of the incident and sought a detailed report from the director-general of police (DGP).

The three girls, aged 15, 14, and 16, were found in a field at Babuhara village in Asoha — around 36 km south of Lucknow — on Wednesday evening by the villagers when they did not return after leaving their house to take fodder for cattle, police had said.

The villagers rushed the teenagers, who are related, to a hospital, where two of them were declared brought dead. The other girl was rushed to the Unnao hospital and later referred to a Kanpur healthcare facility, according to police. The DGP said six police teams had been constituted and senior officials were supervising the probe.

“The post-mortem of the two girls was done by a panel of doctors and no injury before death or external injuries were found on their bodies,” Awasthi said in a video clip released to the media.

“The cause of death could not be ascertained and viscera has been preserved for chemical analysis,” he said. “We are taking the help of forensic experts and looking into all possibilities.”

A medical bulletin issued by the Kanpur hospital treating the third girl has noted it was a suspected case of poisoning, the officer said.

Adityanath has directed officials to ensure proper treatment of the teenager on government expenses, according to a spokesperson.

Earlier, Unnao Superintendent of Police Anand Kulkarni said there was a contradiction in the statements of the mother and brother of the girls.

He added that the brother had said the girls were tied with a stole, while her mother said on Thursday that it was around her neck.

“Our investigation has found that bodies had no marks on them either in the hands or legs, suggesting that they were not tied, the SP said. Kulkarni said the family members who were the first ones to reach the spot were being questioned.

Asked if an FIR had been lodged, the SP said the matter was being investigated and action would be taken on the basis of the post mortem report, which was conducted by a panel of three doctors and videographed.

On speculation about it being a case of honour killing, the officer said all aspects would be included in the probe, adding that it would not be right to say anything on it at the moment.

Congress leaders Rahul Gandhi and Priyanka Gandhi Vadra hit out at the state government over the issue of women safety. “The UP government is not only crushing Dalit society, but also the honour and human rights of women,” Rahul Gandhi tweeted.

“But they should remember that I and the entire Congress party will stand as the voice of victims and will endeavour to get them justice.” He also used the hashtag “Save_Unnao_Ki_Beti” (daughter of Unnao) with his tweet.

Priyanka Gandhi demanded that the third girl be shifted to Delhi for better medical treatment and asked why her family had been detained. In a Facebook post, she said: “The Unnao incident is heart-wrenching. Hearing out the family and providing immediate medical help to the third victim is very important for investigation and justice.”

“The BSP demands a high-level inquiry into the incident and strict punishment for the culprits,” Mayawati tweeted.

Samajwadi Party supremo Akhilesh Yadav termed it shocking and a “shame on humanity”, and demanded strict punishment for the guilty.

“It seems that the chief minister didnt’ care about law and order in the state. The state has become insecure for women due to the BJP,” Yadav said in a statement. He said the Adityanath government had “failed” to check the atrocities on women.

“The BJP government did not have any policy for women security. BJP ideology ignores women interests. UP has become ‘Hatya Pradesh’ (murder state) in the present regime,” Yadav added.

An SP spokesperson said the party had decided to send its delegation to Unnao on Saturday to meet the family members.

SP MLC Sunil Singh Yadav alleged that the Unnao police was trying to hush up the case and sought a probe by an independent agency in the matter. “The incident proves that our daughters are not safe in this regime.

Unnao, in the past three years, has witnessed a spate of similar incidents which is a matter of concern,” he said.