The Prime Minister has been told to step down by the leader of Scotland (Picture: PA/Getty)

The First Minister of Scotland has branded Boris Johnson ‘corrupt’ and called for him to resign.

Nicola Sturgeon is the most high-profile politician so far to tell the Prime Minister to step down following the snowballing Christmas party scandal.

It comes after the SNP’s leader in Westminster, Ian Blackford, urged Mr Johnson to leave Downing Street, and follows the Scottish Conservative leader also ripping into the Tory PM.

Replying to a question from Scottish Greens MSP Gillian Mackay over whether she believes the Prime Minister should resign, Ms Sturgeon said: ‘Yes, I do’.

Hitting out at murmurings of disapproval from Conservative MSPs, she added: ‘While Gillian Mackay was asking her question there, I had members of the Tory group shouting at me from a sedentary position that these issues had nothing to do with us here in the Scottish Parliament.

‘Well, I beg to differ. I think the principles and the values of openness and integrity and transparency matter to all for those of us who care about democracy in this country.

‘I don’t think it is simply a corrupt incumbent of No 10 that has to go.

‘I think it’s time for Scotland to get rid of the whole broken, corrupt Westminster system that is holding us all back.’

It follows allegations of numerous parties at Downing Street last winter, which continued to emerge on Thursday, after a video surfaced showing Number 10 staff joking about the lockdown-busting gathering on Tuesday.

Mr Johnson is accused of making a speech at one of last year’s festive bashes – seven of which are so far rumoured to have taken place – including at least four in Downing Street.

Polls suggest half of the public – including a third of Conservative voters – want Mr Johnson to go, but he has dismissed the calls and insisted he is ‘getting on with the job’.

Yet the public’s lack of trust in Mr Johnson – whose relationship with the truth has been questioned throughout his career – was also laid bare in another damaging poll on Wednesday. 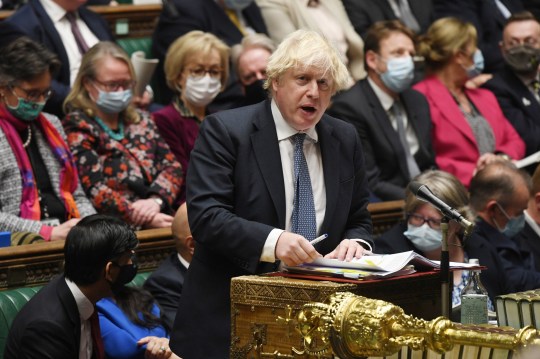 The PM has faced criticism from across the political spectrum – and from his own MPs (Picture: PA)

According to an Opinium survey for Sky News, less than one in ten people believe Number 10’s claim that no party took place in Downing Street last December during lockdown – with other alleged parties not even referenced.

Mr Johnson claims that no rules were broken at the parties in his own home, which he claims not to have been aware of.

Labour’s Sir Keir Starmer has called for the PM to apologise.

Mr Johnson has faced criticism from senior members of his own party and seen his former press secretary Allegra Stratton, who was shown in the video, resign in tears.

He has instructed the Cabinet Secretary to investigate the alleged parties, which took place at a time when ordinary people were being arrested for having gatherings, people were unable to see loved one and thousands were dying with Covid.

Among those to criticise him was Scottish Conservative leader Douglas Ross, who said on Wednesday he believes ‘some sort of party’ had taken place and that the PM should quit if he is found to have misled Parliament over the gathering.

Ms Sturgeon said she ‘almost feels sympathy’ for Mr Ross over the issue.

Speaking at First Minister’s Questions, she added: ‘We have witnessed and are continuing to witness right now many disgusting things in politics, but none of them are on the part of this Scottish Government.

‘I almost feel a little bit of sympathy for Douglas Ross today, because I know that he must be deeply mortified by the actions and behaviour of his colleagues in the UK Government.’