An NHS worker pleaded with eco-activists to let him get through to see his child during yet another road block this weekend.

The unidentified man urges Insulate Britain activists in London to ‘think about people as well’, in a relatively polite confrontation in front of police officers on Lambeth Bridge.

It comes after countless incidents in which motorists have shouted abuse, physically moved and even poured ink on the demonstrators, who are trying to draw attention to the scale of the climate crisis.

They want the Government to insulate Britain’s homes better as part of efforts to reduce the impact of global warming, but their methods have been widely criticised.

In the latest altercation, shown in a video obtained by LBC, the NHS worker says he is not well and argues: ‘Don’t block the road. That’s wrong. I need to get home to my child.’

A police officer interrupts to add: ‘I see you work for the NHS as well, but they don’t consider that, sir, unfortunately… They don’t care.’

The man adds: ‘I need to get home, please.

‘This is really wrong. You got to think about people as well.’

But his pleas appear to have fallen on deaf ears, with the sit down demonstration blocking traffic for hours on Saturday.

Police arrested 30 climate activists after the action on one of the capital’s major bridges.

The protest was held in support of nine Insulate Britain campaigners jailed last week for breaching an injunction aiming to stop them blocking roads – with as many as 250 people marching from the Royal Courts of Justice to express their solidarity.

The arrests came after Public Order Act conditions were imposed on the protest. 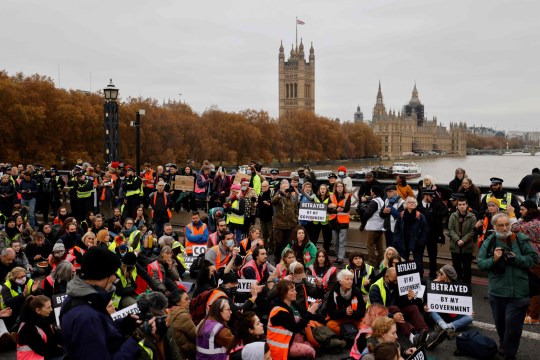 The protest was in solidarity with Insulate Britain activists who were sent to prison (Picture: AFP) 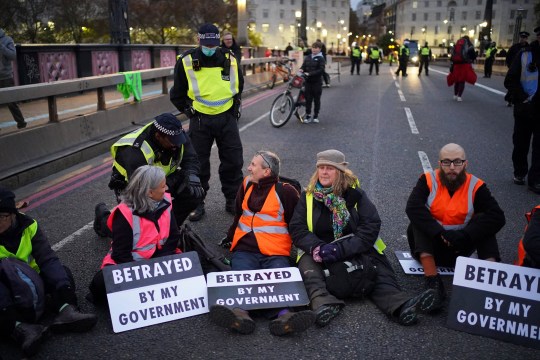 When the demonstrations were eventually removed, the Metropolitan Police said: ‘Lambeth Bridge has now been reopened, 30 arrests were made for breach of S14 conditions.’

Earlier, uniformed officers had stood on Lambeth Bridge as traffic was diverted, with the Metropolitan Police saying this was ‘for the safety of all’.

Cheers had broken out earlier as campaigners told the crowd that the nine jailed Insulate Britain climate activists are ‘political prisoners’ and will not be the last to be locked up.

Gabriella Ditton, 27, an animator from Norwich, Norfolk, was among those who took part in the Saturday’s demonstration. She said she has been arrested six times with Insulate Britain, including once for breaking the injunction. 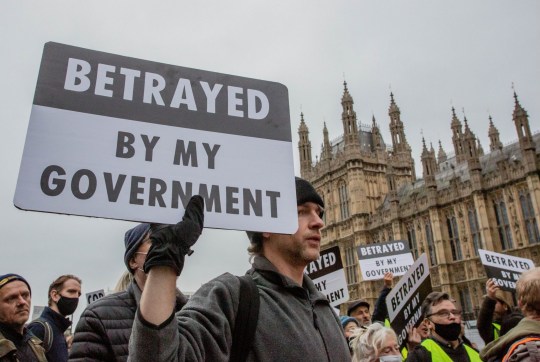 Activists gathered at the central Court of Justice before marching to Parliament Square and Lambeth Bridge (Picture: Shutterstock) 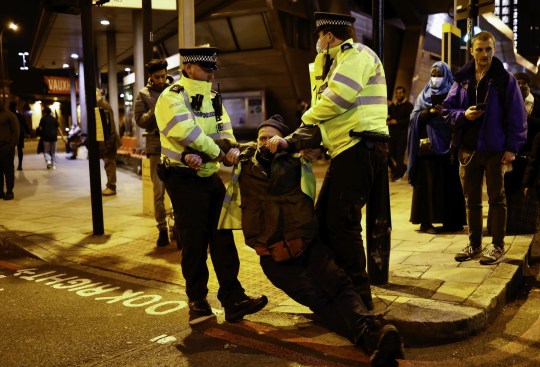 She said: ‘I expect to go to prison at some point for at least six months because I am not going to be apologetic about this.

‘I have known for a couple of years that the only thing that is going to serve us is civil resistance. I have faith in people coming together.

‘Solutions to this crisis exist, we just need the political will to do it.’

Zoe Cohen, 51, said she had travelled from her home in Warrington, Cheshire, to take part in the demonstration, because she is ‘angry, distraught and grieving for the huge amount of nature that we have already lost’.

She said that ‘ordinary people should not have to do this and risk prison’ and added that ‘any disruption is microscopic to the suffering of millions of people who are dying now across the world due to this crisis’.

But many have criticised their methods, including the then leader of the Green Party, who told Metro.co.uk it was dangerous, while a paramedic branded the demonstrators ‘idiots’.

Insulate Britain began a wave of protests in September and supporters have blocked the M25, roads in London including around Parliament, roads in Birmingham and Manchester and around the Port of Dover in Kent.

The latest action follows the COP26 climate summit in Glasgow, which was seen by many activists and experts as not going far enough to avoid environmental breakdown.

Insulate Britain said it was not involved with setting up the event, which was described by those who took part as community-led.

But the group has said it intends to continue its protests until the Government agrees to insulate homes.

Further High Court committal proceedings are expected to be issued against other Insulate Britain protesters relating to protests on October 27. 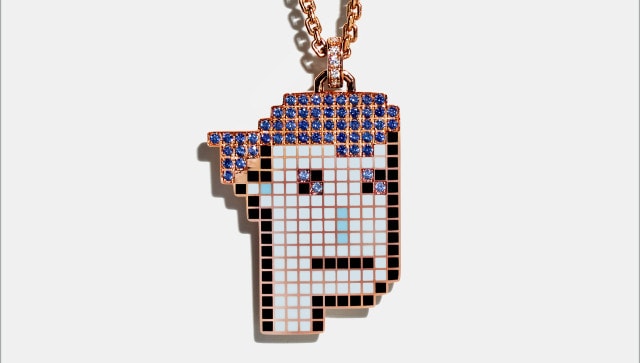