At least five people were injured when a New York City taxi cab jumped a curb and ran over a group of pedestrians walking through Midtown Manhattan on Monday afternoon.

The yellow taxi reportedly collided with an SUV while traveling southbound on Broadway when it drove over the curb. The car plowed over at least five people before it hit the side of a building, according to ABC7.

The startling incident occurred just before 1pm on Broadway and West 28th Street in the Flatiron District of the city.

Photos taken following the accident show the cab fully on top of the raised sidewalk. In the photos, firefighters and other emergency service personnel can be seen opening the taxi’s doors and investigating the scene. 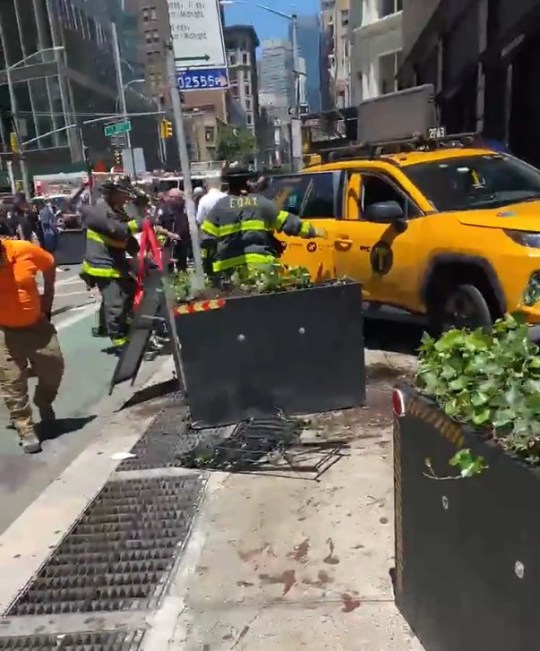 Firefighters appear to respond to the crash, which took place just after 1 pm Monday (Picture: Citizen)

Three of the pedestrians who were struck were taken to Bellevue Hospital and are believed to be in critical condition. The fourth person who was hit suffered non life-threatening injuries.

The cab driver, who stayed at the scene as authorities arrived, also had non life-threatening injuries from the collision.

The identities of those involved in the accident have not been released.

Videos and photos taken at the scene and shared to social media show the accident took place in front of Black Seed Bagel and Milk Bar, a popular bakery and dessert restaurant chain. 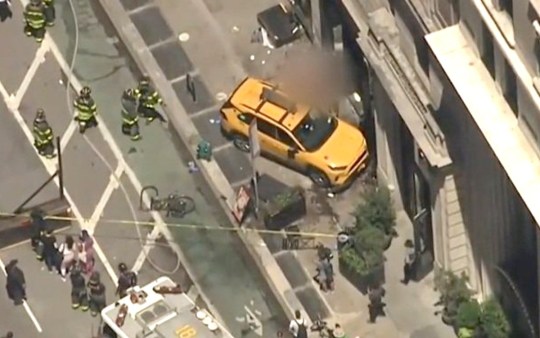 The taxi seems to have hit the front of a bagel shop after hitting several pedestrians (Picture: CBS New York)

The crash seemed to have damaged several planters located on the sidewalk, as well as a bike that was left damaged in a nearby bike lane.

City officials say to expect traffic delays and road closures as they clear up the accident along West 28 and 29th Streets.

It’s unclear what led to the accident, and a police investigation is ongoing.