is set to be sworn in on Sunday, as a key right-wing lawmaker rebuffed the embattled leader’s overtures to defect from the new government.

the speaker of the Knesset and a member of Mr. Netanyahu’s Likud party, said Tuesday that the new coalition government will face a vote of confidence in the parliament before being sworn in on June 13.

Mr. Levin a day earlier had pushed back against the new coalition’s request for a confidence vote this Wednesday, saying the parliament had until June 14 to convene for the vote.

Mr. Netanyahu and his associates have embarked on a furious last-minute effort to woo away supporters of the new coalition and sow chaos that might prevent his ouster. The incumbent enjoys widespread support among right-wing and religious voters, and he and his allies have tried to rally that base to pressure some right-wing lawmakers to abandon the new coalition.

The defection of just one or two lawmakers could prevent the new coalition from mustering a majority and force Israel’s fifth election since 2019.

But in a setback to those efforts, one of Mr. Netanyahu’s targets for defection, the right-wing Yamina party’s lawmaker Nir Orbach, said Tuesday he will support the unity government.

“This is not an easy decision but it is necessary given the reality that we live in,” he wrote in a

post. “Over 700 days of unstable government, a civilian crisis, violent conversation, and a sense of chaos. We are on the brink of a civil war.”

Most other lawmakers in the coalition have also come out in support of a new government that would spell the end of Mr. Netanyahu’s 12-year grip on power.

who heads the right-wing Yamina party, and

By setting the confidence vote date for Sunday, the new coalition must release its agreements publicly on Friday.

Some of the purported details of the agreements have appeared in the Hebrew press, including provisions proposing legislation to place an eight-year or two-term limit for anyone serving as prime minister.

Knesset Speaker Yariv Levin said the new coalition government will face a vote of confidence before being sworn in.


Mr. Netanyahu’s Likud party has seized on another purported detail of the accord that would stipulate a legislative cooling-off period of four years for anyone who served for eight years as prime minister. Both details would appear to target the incumbent, Mr. Netanyahu who has served five terms as prime minister.

Coalition officials declined to comment on the newspaper reports and said they would release the documents publicly and in accordance with Israeli law.

The Yamina party denied the measure that appeared to target Mr. Netanyahu is part of the coalition agreement and said it was rejected during negotiations.

The coalition agreements reportedly also will divide power equally among the right-wing parties and center and left-wing parties.

Messrs. Bennett and Lapid have urged the Knesset speaker to hold a vote to swear in the new government as soon as possible amid concerns that Mr. Netanyahu’s fiery rhetoric is creating an atmosphere that could lead to violence. 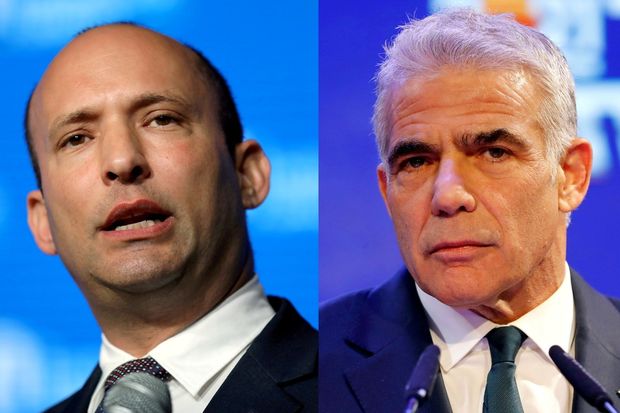 Naftali Bennett, left, and Yair Lapid have urged the Knesset speaker to hold a vote to swear in the new government as soon as possible.

Lawmakers in the new coalition, especially right-wing members, have said they are the targets of numerous threats that have forced some to leave their homes and have made their children feel unsafe. Several members of the new coalition have been given extra security following threats against them.

Mr. Netanyahu has denied any connection to incitement. He has instead said there are attempts to silence legitimate political protests against what he calls a “dangerous left-wing government.” He has said the new government won’t be able to cope with Israel’s numerous enemies.

Meanwhile, Mr. Netanyahu is looking for ways to allow for a controversial nationalist march through Jerusalem to go ahead on Thursday.

The march, originally planned for Jerusalem Day last month, was at the last minute diverted from Damascus Gate in the Old City. The marchers avoided the Muslim part of the Old City but tensions in Jerusalem were high and Hamas launched rockets toward the holy city as the rerouted march was under way, kicking off a deadly 11-day conflict.

Organizers looked to hold the march on its original route through Damascus Gate this Thursday, but police haven’t authorized the event. Israel’s Security cabinet will meet Tuesday evening to hear alternatives for the event.

Write to Felicia Schwartz at felicia.schwartz@wsj.com