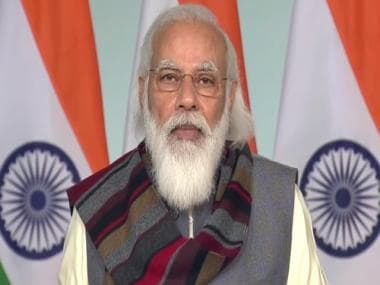 Narendra Modi interacts with farmers LIVE updates: Modi’s session with farmers is a part of BJP’s nationwide outreach to the farmers on 25 December, the birthday of former Prime Minister Atal Bihari Vajpayee

Narendra Modi interacts with farmers LATEST updates: The Centre on Thursday invited protesting farmer unions again for resumption of the stalled talks and asked them to choose a date of their convenience to end the impasse over the three new Agri laws even as Prime Minister Narendra Modi is set to interact with farmers on Friday during a money transfer event.

But the farmer unions alleged that the government’s latest letter for talks is nothing but a propaganda against the peasants to create an impression they are not interested in dialogue, and asked it to put the scrapping of the new farm laws in the agenda to resume the parleys.

The Sanyukt Kisan Morcha, an umbrella body of 40 farmer unions protesting at three border points of Delhi – Singhu, Tikri and Ghazipur – for the last 27 days, is likely to hold a meeting on Friday to discuss the Centre’s letter and respond to it formally.

The Union Agriculture ministry while extending a fresh invite, however, made it clear that it would not be “logical” to include in the agenda any new demand related to minimum support price (MSP), saying it was out of the purview of the new farm laws.

However, the unions said the MSP cannot be separated from the demand of repealing the contentious laws, asserting the issue of a legal guarantee for it is a key part of their agitation

The ministry also reiterated it is ready to find a “logical solution” to the issues raised by protesting farmer unions.

With the push of a button on Friday, Modi will enable the transfer of more than Rs 18,000 crore to over nine crore beneficiary families. The amount will be the next installment of financial benefits to farmers under the Pradhan Mantri Kisan Samman Nidhi (PM-KISAN),

According to the Prime Minister’s Office (PMO), Modi will also interact with farmers from six states via video-conferencing during the event.

The Congress, meanwhile, stepped up its attack on the government and petitioned President Ram Nath Kovind and demanded a joint session of Parliament to repeal the laws, with party leader Rahul Gandhi alleging that democracy is only “imaginary” in India.

Congress leaders earlier staged a sit-in protest outside the party headquarters in the National Capital after they were prevented from marching towards Rashtrapati Bhawan. The leaders including Priyanka Gandhi were detained by the police for violating prohibitory orders.

The BJP on its part challenged Rahul Gandhi for an open debate on what the Congress did for farmers’ welfare when in power and what the Modi government has done for them, as it rejected his allegations against the Centre as “baseless and illogical”.

Union minister Prakash Javadekar accused the Congress of ignoring farmers’ interests and keeping them poor to ensure cheap grain prices, and asserted that the Modi government empowered them by implementing the Swaminathan commission report to give them remunerative price through MSP.

In a three-page letter written to 40 farmer leaders, Agriculture Ministry Joint Secretary Vivek Aggarwal said, “I again request you that the government has been discussing all issues with an open heart and good intention to end the protest, and will continue to do so. Kindly suggest a date and time (for the next round of talks.”

The previous five rounds of talks between the government and the unions have failed to break the deadlock Aggarwal asked the union leaders to provide details of other issues they want to discuss. The talks will be held at Vigyan Bhawan in New Delhi at a ministerial level, he said.

On MSP, he said the farm laws have no connection with the price regime nor would have any impact on the procurement of farm produce at the fixed rates.

This has been told to the unions in every discussion and it has also been made clear that the government is ready to give written assurance on MSP, he added.

“Any new demand related to MSP, which is out of the ambit of farm laws, is not logical to include in the talks. As informed earlier, the government is ready to discuss all the issues raised by farmer unions,” he noted.

Aggarwal said it is important to keep all doors open for discussion for the government. It is the responsibility of the government to listen to farmer organisations and farmers and the government cannot deny this.

The government with an open heart has held several rounds of discussion with farmer unions under the Samyukt Kisan Morcha and urged them to choose a date as per their convenience for the next round of talks, he added.

Aggarwal’s letter has come in response to the Samyukt Kisan Morcha’s 23 December letter, through which it had informed the government that the farmer unions are ready for talks but asked it to send a “concrete proposal in writing instead of repeating rejected proposals around meaningless amendments.”

“The government is not serious about our demands and they are writing letters every day. The new letter is nothing but a propaganda being created by the government against us to give an impression that we are not interested in holding talks.

“The government should bring the repeal of the three farm laws in the agenda for a fresh round of dialogue,” senior morcha leader Shiv Kumar Kakka told PTI.

He said a legal guarantee of the MSP is an important part of the farmers’ demands, which cannot be neglected by the government.

In another development, two farmer organisations from Uttar Pradesh met Union Agriculture Minister Narendra Singh Tomar and urged him not to repeal the new farms laws.

Kisan Mazdoor Sangh (KMS) and Kisan Sena (KS) made a representation, which also included a demand for strengthening the dispute resolution system in case of any trouble in contract farming.

So far, at least 12 farmers group have extended their support for the laws, the previous ones being from Uttarakhand, Delhi and Uttar Pradesh, among other places.

In a major outreach to farmers, the BJP has made plans to ensure participation of over one crore of them at thousands of venues across the nation on Friday when the prime minister effects the transfer of Rs 18,000 crore to nine crore farmers and interacts with a section of them.

BJP leaders, from Union ministers to its MPs, MLAs, all elected representatives besides organisational members, will fan out across the country to attend the programme and speak to farmers as well.

The event coincides with former prime minister Atal Bihari Vajpayee’s birth anniversary which the BJP observes every year as “good governance day” since it came to power at the Centre in 2014.

At a press conference in Chandigarh, the Jannayak Janta Party (JJP) leader reiterated he will tender his resignation the day he feels he is unable to ensure MSP for the farmers’ produce in Haryana.

US Inauguration Day schedule: What to expect from Joe Biden’s ceremony

Union Budget 2021: From going paperless to no briefcase, 5 differences in the way it will be presented this year

Govt takes all measures to safeguard sovereignty: MEA on report of China building village in Arunachal

Trump promoted Sidney Powell in November despite calling her ‘crazy’