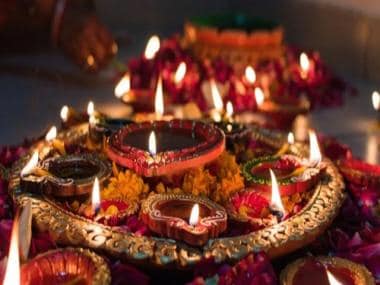 On Narak Chaturdashi, Bengalis light 14 earthen lamps at the doorways of their houses to guide the spirits of 14 generations of their forefathers and ward off evil spirits

Abhyang Snan Muhurat on Naraka Chaturdashi is from 4.31 am to 5.49 pm, according to Drikpanchang.

The festival of Narak Chaturdashi derives its name from the demon Narakasura. The festival marks the end of the demon at the hands of Lord Krishna’s consort Sathyabhama.

Narakasura was the son of Bhudevi and Lord Varaha (an incarnation of Lord Vishnu). However, he was greedy and unjust, creating destruction and devastation across the worlds. He knew that as per Lord Brahma’s boon, none but his mother Bhudevi could kill him.

Having grown complacent, he even attacked Lord Krishna. However, the Blue God’s consort Sathyabhama, who was an incarnation of Bhudevi retaliated and killed Narakasura.

However, before his death, Narakasura pleaded to Sathyabhama to grant him a boon. He wanted to be immortal in the memories of people and hence wanted them to celebrate his death by the lighting of lamps. Thus people light lamps on Narak Chaturdashi, celebrating the death of Narakasura.

Another legend says that it was Lord Krishna who killed the demon Narakasur who kept 16,000 girls hostage. It is believed that the rescued girls were all afraid of embarrassment and societal shunning and thus Krishna and his wife decided that Lord Krishna will marry all of them and the world will know them as his wives.

On the occasion of Chhoti Diwali, people clean their houses and decorate them elaborately. Some believe that wiping out all dirt and garbage from their home on that day rids the house of evil.

Interestingly in Bengal, Narak Chaturdashi is also known as Bhoot Chaturdashi and is dedicated to spirits. It is celebrated a day prior to Kali Puja. Much like Halloween, Bhoot Chaturdashi is the day it is believed that the veil between the tangential world and the afterlife becomes thin and ghosts and spirits are able to freely roam about on Earth.

It is the day when Bengalis light 14 earthen lamps at the doorways of their houses to guide the spirits of 14 generations of their forefathers and ward off evil spirits.

Amid tensions at LAC, India and China ramp up drone technology to boost operational preparedness

Melania Trump, 50, and Donald ‘both had secret Covid vaccines before leaving White House’