Thermal screening will be done at the entry gates and passengers will have to wear masks and maintain social distance. 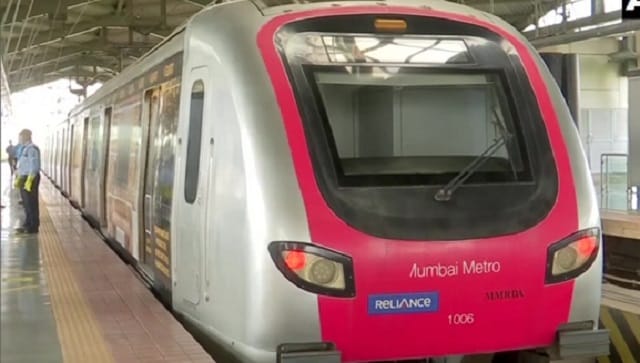 After being shut for over six months due to the coronavirus lockdown, the Mumbai Metro is set to resume operations on the Ghatkopar-Versova Metro One line from Monday (19 October), with a third of the passenger capacity and precautionary measures like thermal screening at entry gates.

As per news agency PTI, Mumbai Metro CEO Abhay Kumar Mishra on Saturday informed reporters that the services will be operated on the 11-km long line for 12-hours, from 8.30 am to 8.30 pm.

The number of services will also be halved to about 200 trains every day and the frequency reduced ( in either direction in up to eight minutes as against five minutes earlier).

Metrokars, here’s the list of operational entry gates for you to save and share with friends & family. See you tomorrow, Mumbai. #YourMetroSafeMetro #MetroSeChaloNaMumbai pic.twitter.com/bmzBBuSGmT

As per an Indian Express report, unlike in the suburban trains, all commuters will be allowed on the Metro trains. However, against 1,350 people per service in pre-COVID times, now the train will carry only 360 people, reported PTI.

The official said that the measures are being taken to ensure passenger safety through proper social distancing.

According to an NDTV report, passengers will be given paper tickets instead of plastic token to minimise the risk of infection and digital payments will be encouraged, Mishra said.

Further, passengers will be encouraged to use digital tickets, smart cards of QR code-based tickets and the temperatures inside the coaches will be maintained between 25 to 27 degree Celsius, said an official statement. Authorities will regularly disinfect all the stations and also the coaches, it said.

Additionally, passengers will have to undergo thermal screening at entry points to stations, wear masks and follow social distancing, whether on the platforms or in the trains, said the NDTV report, adding that stickers marking where once can sit or stand have been placed inside the coaches.

A LiveMint report stated that passengers are advised to carry minimum luggage and avoid metallic items. Children and elderly people are advised not to travel on the Metro and the use of Aarogya Setu app is recommended.

Mishra said that over 300 workers worked through the lockdown for the maintenance of the trains and station infrastructure, of which 32 had tested positive for COVID-19 and four continue to be infected.

The Uddhav Thackeray-led state government on 14 October allowed the Mumbai Metro to resume operations in a graded manner from 15 October as part of its “Mission Begin Again”.

However, following the announcement, the Mumbai Metro said it will resume operations from 19 October after completing all safety runs.

In its Unlock-4 guidelines, the Centre had allowed Metro rail services in areas outside containment zones to resume in a graded manner from 7 September, following which services were gradually restarted in cities such as Delhi, Bengaluru and Chennai.

The Centre had also issued Standard Operating Procedures (SOPs) according to which, symptomatic persons would not be allowed to travel on the Metro trains and the use of face masks would be compulsory.

The 11.7 km long metro line used to ferry over 4.5 lakh commuters every day.